France will purchase 100% of EDF, an electric company, to increase its energy independence

The worst is yet to arrive in the face of rising prices and a severe energy crisis. 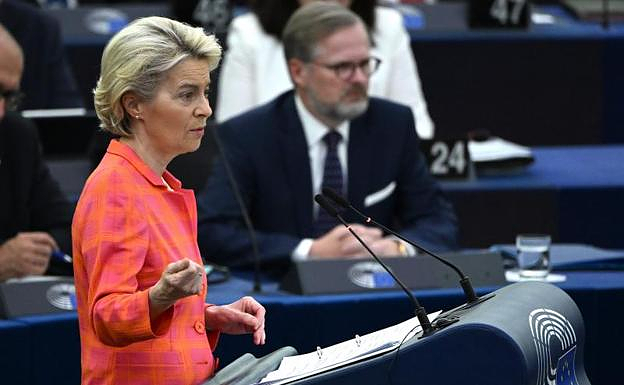 The worst is yet to arrive in the face of rising prices and a severe energy crisis. Ursula von der Leyen (president of the European Commission), warned the Twenty-seven on Wednesday that there would be more disruptions to the supply of natural gas. She also suggested that Russia could cut off the supply. France responded to the concerns by announcing that the French Prime Minister Elisabeth Borne would be announcing its intention to nationalize EDF, the multinational electricity company.

Borne stated that "I confirm the State plans to hold one hundred percent" of EDF's capital during a speech at National Assembly. The Executive already holds 83.88% capital of EDF and intends to increase the country's energy independence, despite the current shortage.

In her Wednesday speech before the plenary session in Strasbourg of the European Parliament, the president of the European Commission pointed out that "it's obvious that Vladimir Putin, the Russian president, continues to use energy in a weapon." He also recalled that 12 countries in the club have already suffered partial or total gas cuts. For example, Bulgaria, Finland, and Poland are experiencing severe interruptions in their gas supplies, while Germany, Italy and the Netherlands receive less than they require. The German power already had to restart coal plants in order to ease the crisis. In cities like Hamburg, politicians have already proposed the rationing hot water.

Von der Leyen, while he praised the fact that European governments have already prepared national contingency plans for the event of an interruption, stressed the importance of coordinated and joint action within the EU. He said that "we must ensure that gas flows to the places it is most required" and immediately appealed for European solidarity.

The head of the Community Executive asked Member States to not forget the "bitter lesson" from the first months of pandemic. This was when "selfishness" and "protectionism" were a result of scenes of blockade in the EU. She insisted that "Unity will bring us success."

Von der Leyen, despite the severity of the crisis in energy, wanted to send a reassuring message. He explained that he would present a proposal for a European emergency plan "in the middle of July". A 26th-day extraordinary meeting of EU energy ministers was called to discuss the Brussels initiative as well as the national plans for each country.

He believes it is urgent to invest in renewable energy to avoid making Putin richer, and also because they are more efficient and cleaner than other options. Petr Fiala (Czech Prime Minister) said the same thing Wednesday in front of the European Parliament. He noted that his six-monthly presidency at the European Council will "combat inflation and high energy prices" and "amortize the impact on our citizens".

‹ ›
Keywords:
LeyenProximoCorteTotalRusia
Your comment has been forwarded to the administrator for approval.×
Warning! Will constitute a criminal offense, illegal, threatening, offensive, insulting and swearing, derogatory, defamatory, vulgar, pornographic, indecent, personality rights, damaging or similar nature in the nature of all kinds of financial content, legal, criminal and administrative responsibility for the content of the sender member / members are belong.
Related News