For Stone Age people, hunting bears was essential for survival

When Wolfgang Schäuble recently advised the Germans to protect themselves against the winter cold with sweaters instead of central heating, the senior president of the German Bundestag received severe criticism. 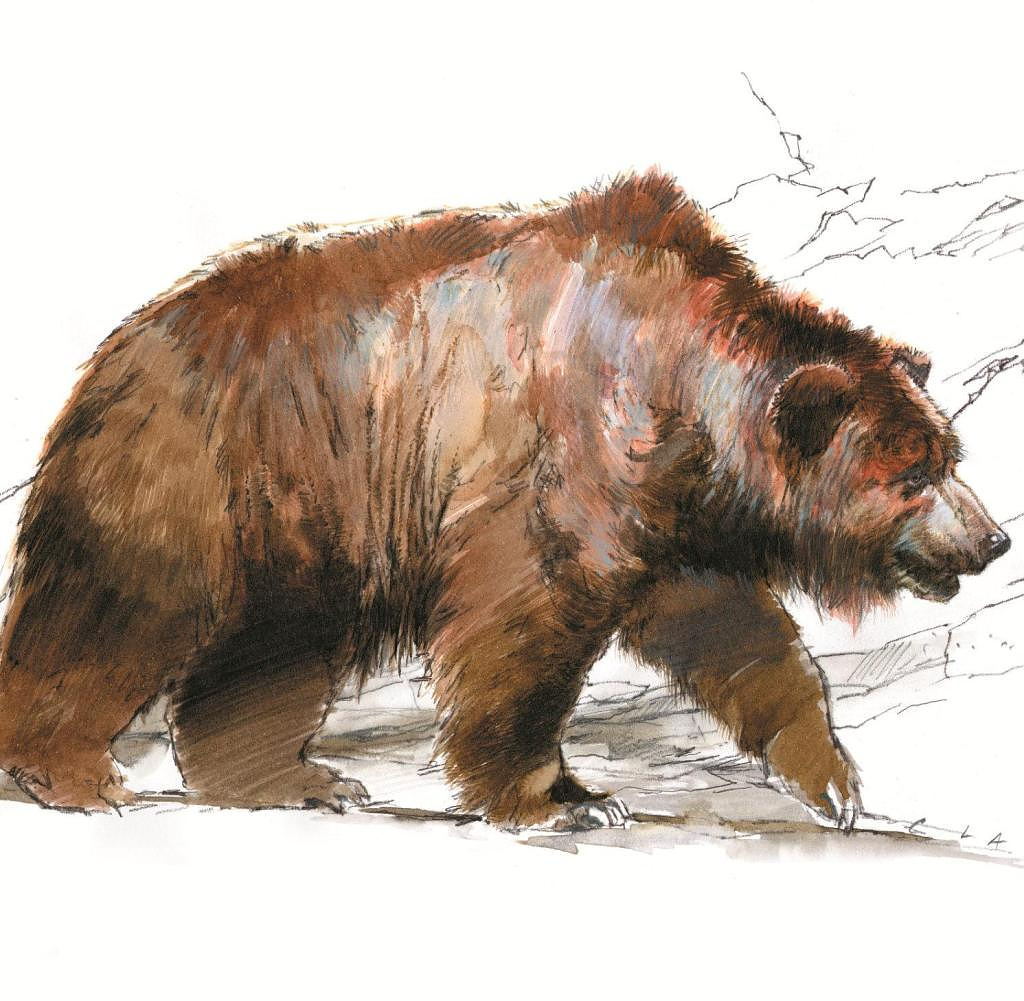 When Wolfgang Schäuble recently advised the Germans to protect themselves against the winter cold with sweaters instead of central heating, the senior president of the German Bundestag received severe criticism. This debate about social indifference must have seemed somewhat unreal to our distant ancestors. They lived in an icy environment and were happy when nature offered them protection against it, even if it lacked any correctness in terms of clothing policy. We are talking about animal skins, more precisely: skins of brown and cave bears.

This is the result of an analysis of bones from the Schöningen excavation site in the Helmstedt district, which a team from the University of Tübingen, the Senckenberg Center for Human Evolution and Palaeoenvironment and the University of Leiden has now published in the "Journal of Human Evolution". According to this, cut marks on the metatarsal and finger bones of a cave bear indicate that the animal's fur was pulled over its ears to be carried by hunters.

"In archeology, cut marks on bones are often interpreted as an indication of the use of meat," explains the Tübingen archaeozoologist and first author of the study, Ivo Verheijen. But there is hardly any flesh to be gained from hand and foot bones. "In this case, we can trace such fine and precise cut marks to the careful stripping of the fur."

This must have happened shortly after the bear's death, otherwise the hair will be lost and the fur will become unusable. "The animal was skinned, it could not have been dead for long at that point," quotes the University of Tübingen Verheijen. The bones were found in a human deposit that is dated to be 300,000 years old. This is one of the oldest specimens of this type in the world.

The new interpretation also sheds light on the most spectacular finds in the abandoned lignite mine near Schöningen. It consists of nine wooden spears and a lance that were salvaged between 1994 and 1998 by the Lower Saxony State Office for the Preservation of Monuments. They are dated to be between 290,000 and 337,000 years old and are considered to be the oldest fully preserved hunting weapons in the world. Experiments have shown that their throwing properties are similar to those of modern competition javelins.

This innovation is attributed to Homo heidelbergensis, from which Neanderthals later evolved. With these long-range weapons it was possible to hunt large and well-fortified animals such as the cave bear. With a length of up to 3.5 meters and a shoulder height of 1.70 meters, the long-extinct Ursus spelaeus was significantly larger than the present-day brown bear.

The representatives of the genus Homo, who had their camp near Schöningen in the Palaeolithic Age, apparently went specifically for bear hunting. "If only adult animals are found at an archaeological site, this is usually taken as an indication of hunting - and in Schöningen all bones and teeth found from bears belonged to adult individuals," says Verheijen, explaining the finding.

The find opens up a new perspective, says the Tübingen prehistorian Nicholas Conard, head of the Schöningen research project and co-author of the study. The location of the cut marks indicates that the skins of the cave bears were also used. "So animals were not only used for food, but also their skins were essential for surviving in the cold." In the broadest sense, the supply of bear skins can be seen as one of the oldest active adaptations of early humans to the climate in the north.

That was also necessary because 300,000 years ago the climate in Europe changed fundamentally. The so-called Saale Ice Age replaced the friendly climate of the Holsten Interglacial and demanded new survival strategies from the early inhabitants of the continent. One of these may have been the intensification of hunting efforts.

The bear bones could also provide an interesting clue from a geographic perspective. Cave bears mostly eat plants. This would mean that the people of Schöningen still lived in the deciduous tree zone and not in the tundra that spread out near the advancing glaciers.

‹ ›
Keywords:
ArchäologieAnthropologieSteinzeitVorgeschichteTexttospeechSchöningenFell Von BraunSchöninger SpeerWolfgang SchäubleHelmstedtFacebookUniversität LeidUniversität TübingenHöhlenbärenBärenjagdGesundheit
Your comment has been forwarded to the administrator for approval.×
Warning! Will constitute a criminal offense, illegal, threatening, offensive, insulting and swearing, derogatory, defamatory, vulgar, pornographic, indecent, personality rights, damaging or similar nature in the nature of all kinds of financial content, legal, criminal and administrative responsibility for the content of the sender member / members are belong.
Related News