For Putin, the world is entering its "most dangerous" decade

"We are at a historic moment. 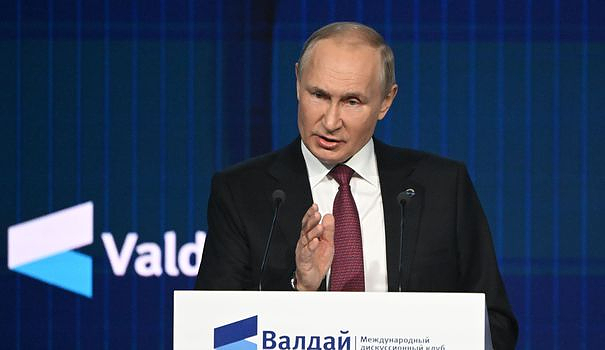 "We are at a historic moment. We are undoubtedly facing the most dangerous, the most important, the most unpredictable decade" since 1945, declared the Russian leader, in front of the discussion forum of Valdai in Moscow.

"The West, without a clear unity, is not able to lead the world, but it is trying desperately, and most of the people of the world cannot accept it," he said, judging the planet in a "revolutionary situation".

According to him, the assault on Ukraine is part of this "tectonic change of the whole world order".

"Russia will never put up with the diktat of the aggressive, neo-colonial West," he added, referring to "inevitable" changes in the "world order".

Shortly before, he had described his confrontation with the West, particularly in the context of the offensive against Ukraine, as a fight for the very survival of Russia.

"Russia is not challenging the West, Russia is just defending its right to exist," he said again, accusing Americans and other Westerners of wanting to "destroy, erase (Russia) from the map" in a new indictment against its geopolitical rivals who support and arm Ukraine against Russian soldiers.

Regarding Russian accusations that kyiv is developing a "dirty bomb", the master of the Kremlin asked the International Atomic Energy Agency (IAEA) to go "as soon as possible" to Ukraine.

"The IAEA wants to come (...). We are for it, as quickly and as widely as possible, because we know that the authorities in kyiv are doing everything to cover the traces of these preparations", he said. -he assures.

“We even know where it is done approximately (in Ukraine),” added the Russian leader.

According to him, kyiv wants to use such a radioactive weapon "to be able to say later that it was Russia that carried out a nuclear strike", said Mr. Putin, stressing that he himself had asked his minister to Defense, Sergei Shoigu, to "inform" his Western counterparts.

The latter has indeed met in recent days with the American, Chinese, French, Turkish and British Ministers of Defense, exchanges of unprecedented intensity - over a few hours - since the start of the Russian offensive in Ukraine on February 24.

Ukraine and its Western allies have all since widely condemned Russia's "obviously false" allegations.

The International Atomic Energy Agency (IAEA) for its part underlined in a press release Thursday evening that it would visit "this week" two Ukrainian sites at the request of kyiv "to detect any diversion of nuclear material".

Vladimir Putin also relativized his past remarks about the possibility of using atomic weapons, believing that he had only responded to threats from his opponents.

"We never talked about the possibility of using nuclear weapons. We only hinted in response to statements by other countries," said the Russian president.

For him, Ukraine and the West claim that Moscow is playing nuclear escalation in order to "influence neutral countries to tell them: Look at Russia! Don't cooperate with her!".

"The only country in the world that has used nuclear weapons against a non-nuclear state is the United States," Putin charged.

Referring to the economic situation of his country, he judged that "the peak of economic difficulties" had "passed". According to him, "the Russian economy has adapted (...) What is happening is ultimately beneficial for Russia and its future (...) including in the economic sphere".

In the evening, the Russian Foreign Ministry also announced that Russia had asked the UN Security Council to open an international investigation into Washington's involvement in the alleged development of biological weapons in Ukraine.

"Russia had no choice but to submit a complaint to the President of the UN Security Council asking for the opening of an international investigation" into "biological military activities of the United States on the territory Ukrainian," he said.

Shortly after the start of its offensive in Ukraine, Russia accused Washington of funding a biological weapons program in Ukraine.

Both the United States and kyiv have denied the existence of laboratories intended to produce biological weapons in Ukraine.

On Thursday evening, a senior UN official for his part declared that the United Nations was "not aware" of a biological weapons program in this country.

"We are aware of Russia's official complaint," said Adedeji Ebo, Deputy High Representative for Disarmament Issues at the Security Council.

"As High Representative Izumi Nakamitsu informed the Council in March and May. The UN is not aware of such a biological weapons program. This is still the case today," said he added, noting that the UN had no mandate or "technical capacity" to investigate.