For his first royal speech, Charles III promises to serve the British all his life

Charles, 73, will be officially proclaimed king on Saturday, following the death on Thursday of his mother Elizabeth II which ushered in a period of national mourning and a new era for the British monarchy. 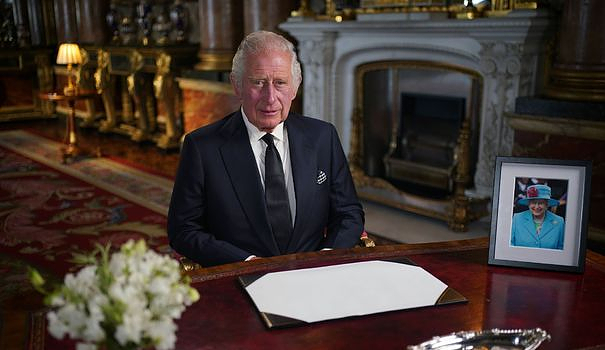 Charles, 73, will be officially proclaimed king on Saturday, following the death on Thursday of his mother Elizabeth II which ushered in a period of national mourning and a new era for the British monarchy.

In a sober and confident tone for his first televised swearing in as sovereign, Charles III, dressed in a black suit, pledged to defend "constitutional principles", after promising to serve the British all his life.

“As the Queen had done with unwavering dedication, I too solemnly pledge myself now, throughout the remaining time God grants me, to uphold the constitutional principles which are at the heart of our nation,” said the king from Buckingham Palace.

He paid tribute to the "life of service" of his mother, who died at 96, to her "love of tradition", her "adherence without fear to progress", but also to her "warmth and humor". He called Elizabeth II, who reigned 70 years and 7 months, an "inspiration and example" to him and his family.

In a moving tribute, he thanked his "beloved mom".

The King announced that William would be the new Prince of Wales, Charles' title prior to his accession to the throne.

From this first speech, the sovereign also expressed his "love" for his son Harry and his wife Meghan, whose break with the monarchy to settle in California has shaken the royal family.

And he underlined the "loyal public service" of his wife Camilla, now queen consort, and her "unwavering dedication on which I rely so much".

Returning from Scotland early Friday afternoon, Charles III, accompanied by Camilla, greeted the crowd at Buckingham for a long time.

Smiling, he shook hands with dozens of people as he got out of the car, thousands of people having flocked since the announcement of the Queen's disappearance to lay bouquets of flowers and words of tribute.

"All our condolences", "God bless you", "I wish you the best", threw the crowd to him.

A woman even dared to kiss him on the cheek. Another gave her a red rose. Then the king walked into the palace, where he had his first audience with head of government Liz Truss. She had met Queen Elizabeth II on Tuesday at Balmoral, who had instructed her to form a government, and will have met two monarchs in four days, unheard of.

Liz Truss on Friday called Elizabeth II "one of the greatest leaders the world has ever known".

The government "united in its support for the new king", observed a moment of silence on Friday morning during an extraordinary council of ministers.

A religious ceremony in memory of the Queen was held at the end of the day at St Paul's Cathedral in London in the presence of Ms Truss, who read extracts from the Bible.

Hundreds of people followed the ceremony outside on their mobile phones.

Bells had previously rung at 11:00 GMT in churches across the country, including Windsor where the Queen lived most of the time.

96 cannon shots sounded at 12:00 GMT, fired from Hyde Park but also at the castles of Cardiff and Edinburgh, York, Portsmouth and Gibraltar.

Elizabeth II died Thursday "peacefully" in her castle of Balmoral in Scotland, where were then her son Charles and her daughter Anne.

His two other sons Andrew and Edwards, and Prince William, now heir to the Crown, then Prince Harry alone, arrived after the death, which the Prime Minister had been informed of around 3:30 p.m. GMT.

The King has made it known that the royal mourning - which involves family, staff and representatives of the Royal Household - will last until seven days after the Queen's funeral, the date of which has not been confirmed, but which should take place on September 19.

The royal residences will remain closed until after the funeral and the flags there will be at half mast.

National mourning, decreed by the government, must last him until the day of the funeral.

Thousands of Britons, some moved to tears, came to lay flowers in front of Buckingham Palace, Windsor and Balmoral in the north of Scotland.

The Queen's photos made the front page of all British daily newspapers on Friday, for special editions in tribute to the one who had devoted her life to the Crown, crossing eras and crises with the same quiet and mysterious affability.

"I have goosebumps, you can feel that we are part of the same country and that it united us, it's very beautiful, really", tells AFP moved Shelley Bissett, 32, came lay a bouquet in front of Windsor Castle.

"I wanted to be here today... It's very powerful to come together here with so many other people, to show how much we respect her. She's done so much for this country, it won't be the same without her", abounds David Renn, 42, who came by bike from London to Windsor.

The late monarch, known for her sense of duty and her tongue-in-cheek humor, was omnipresent in the lives of the British, present on banknotes and stamps, which will have to change their face.

His portrait adorns London bus stops, replacing advertisements, and condolence books have been opened in some churches, as well as online at the royal family's official website.

Some stores closed their doors as a sign of mourning. The Bank of England has announced the postponement for a week of its much-awaited monetary policy meeting given the current price spike.

Many sporting events, such as Premier League matches this weekend, but also the fashion shows of several designers, including the famous Burberry brand, scheduled for next week during London Fashion Week, have also been postponed, while railway and postal workers suspended their planned strikes to denounce the cost of living.

The new King Charles becomes the oldest British monarch at the start of his reign. He is infinitely less popular than his mother, who knew how to maintain the prestige of the monarchy, giving no interviews and keeping her opinions to herself.

He takes the throne in a difficult period, the United Kingdom facing the worst economic crisis in 40 years, while four Prime Ministers have succeeded in six years.

The Kingdom is also shaken by internal dissension, between the consequences of Brexit, the desire for independence and tensions in Scotland and Northern Ireland. In the former British colonies that remained kingdoms, criticisms are also strong on the colonialist past and the republican inclinations are reinforced.

While he had become much more present in recent months, often replacing his mother in declining health and increasingly frail, it is a completely different challenge that now awaits the king, as head of state of 15 countries. , from New Zealand to the Bahamas.

During her historic reign, Elizabeth II had known 15 Prime Ministers, whom she could listen to and advise during usually weekly private audiences on which nothing ever transpired. "She often had this little light and this beautiful smile, which (...) calmed the nerves of so many people," former Prime Minister Theresa May told the BBC on Friday.

After the funeral, the Queen will be buried privately in the chapel at Windsor Castle.