Foot: Ukraine launches its season, despite the war

For the first match of the Ukrainian first division, Shakhtar Donetsk drew 0-0 with Metalist Kharkiv in a match played without spectators at the Olympiski stadium in Kyiv. 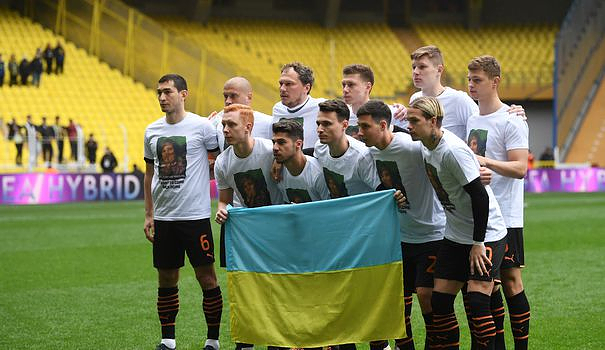 For the first match of the Ukrainian first division, Shakhtar Donetsk drew 0-0 with Metalist Kharkiv in a match played without spectators at the Olympiski stadium in Kyiv.

Before kick-off, the players of both teams and the referees entered the pitch wrapped in Ukrainian flags and unfurled a banner marked with the words: "We have the same courage".

Shakhtar players, whose hometown Donetsk has been under the control of pro-Russian separatists since 2014, wore T-shirts reading: "Ukraine will win". Those of Kharkiv, the second city of the country regularly bombarded by the Russian army, had a similar jersey.

The Metalist has also added the emblem of the Ukrainian Armed Forces to its jersey, instead of the traditional sponsor logo.

After a minute of silence in memory of the dead of the Russian invasion, a Ukrainian soldier symbolically gave a fictitious kickoff.

The war has had a devastating effect on Ukrainian clubs, especially the smaller ones, which have little cash.

Two first division teams, FC Mariupol and Desna Cherniguiv, were allowed to skip this season but to the next one.

The port of Mariupol on the Black Sea was conquered in May by Russian forces at the cost of much destruction and the Desna stadium in Cherniguiv was hit by a Russian rocket.

The decision to start the new football season seems to come from President Volodymyr Zelensky, in order to restore morale to the population.

If the matches are held behind closed doors for security reasons, passers-by expressed their support for Ukrainian clubs on Tuesday.

"It shows that the war will not stop us," Dynamo Kyiv fan Maksym Scherbyna, 35, told AFP.

Another supporter, Denys Lazarenko, 41, assured that Ukraine "much needs football", which "unites people".