By ending his player contract at Salernitana, modest 12th in Serie A which he joined last year, Ribéry said stop, caught up in repeated injuries, especially to the knees. 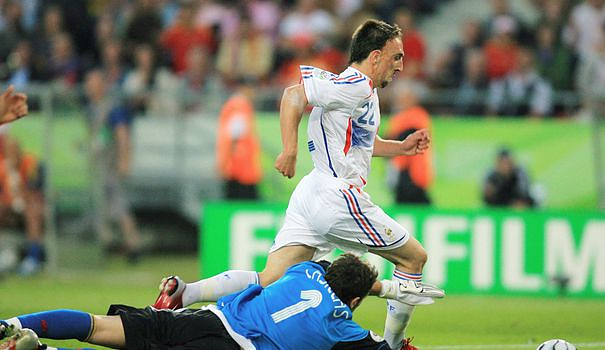 By ending his player contract at Salernitana, modest 12th in Serie A which he joined last year, Ribéry said stop, caught up in repeated injuries, especially to the knees.

"The pain in my knee has only gotten worse and the doctors are formal: I no longer have a choice, I have to stop playing," Ribéry explained in a video posted on social networks.

"The ball stops but not my feelings for him," he added, in four languages, on his Instagram account.

In the process, the Salernitana confirmed that the French would remain "in another role" with the club - a function yet to be specified but described as "new beautiful chapter" by the player.

Ribéry puts an end to 22 years of professional career, the peak of which was the 2012-2013 season with Bayern Munich, author that year of the Championship-Cup-Champions League treble.

"My best season was 2013, what we did was crazy, we can't forget that," he summed up in 2019 when he left Bayern, of which he became "a legend", as the Munich club also underlined this on Friday when he announced his retirement.

Walking on water in the spring of 2013, Ribéry won the UEFA Best Player of the Season trophy and many observers deemed him worthy of the Ballon d'Or.

But, in full rivalry between Lionel Messi and Cristiano Ronaldo, the calendar of the prestigious trophy had been modified in favor of Ribéry and it was the Portuguese who had won ahead of the Argentinian and the French, a heartbreak for "Francky ".

"What more could I have done than win everything with Bayern?" he lamented.

The other great regret of his career is the absence of a trophy with the Blues, whose winger with 81 selections (16 goals) will have known the bright side (final of the World Cup-2006) like the dark years, until to Knysna's nightmare at the 2010 World Cup.

At the time, he was accused of being a leader during the strike of the France team in the middle of the South African World Cup, which earned him the label of "caïd", a qualifier used at the time by Sports Minister Roselyne Bachelot.

From there dates his disenchantment with the French public, reinforced the same year by the "Zahia" affair, when the justice system reproached him for priced relations with a minor prostitute. He was finally released in 2014.

The Euro-2012, completed in the quarterfinals, then the World Cup-2014 that Ribéry could not play due to injury, sound like missed appointments with a view to reconciliation, and the striker retired from international 2014.

Germany will have better appreciated the talent and endearing personality of Ribéry, married to Wahiba and father of five children.

But, before being renamed "Kaiser Franck" in Germany, in reference to "Kaiser Franz" Beckenbauer, Ribéry was first "Ti Franck", a kid from Boulogne-sur-Mer with a dented trajectory and a scarred face. - aftermath of a car accident when he was two years old.

Excluded from the Lille training center, he started his career in Boulogne in the third division, before moving from one club to another (Alès, Brest, Metz, Galatasaray) to finally join Marseille, and hatched in the French team just before the 2006 World Cup, where he was vice-world champion in Zinedine Zidane's team.

At the time, football France discovered a schoolboy kid, between unscrewed salt shakers, cut-out socks and buckets of water placed at the top of the doors, a refreshing character dubbed by "Zizou" and the old guard of the Blues.

He then left Marseille for the great Bayern, which paid 30 M EUR to attach this pocket winger (1.70 m).

Ribéry will remain twelve years in Bavaria, a stay marked by immense sporting successes and some more or less comic slippages, such as his collision against a wall when he had wanted to get behind the wheel of the team bus during an internship. to Dubai!

With the "Rekordmeister", Ribéry piled up the trophies until he accumulated nine crowns in the Bundesliga, a record since erased by his former team-mate Thomas Müller (11 titles).

In 2009, the Munich leaders added Arjen Robben to him, to occupy the other wing. These two fighters, with very strong personalities, form a "Rib-Rob" duo that puts defenses to the test and delights the Allianz-Arena for many seasons.

But the two left the club in 2019. Robben hung up two years later while Ribéry played extra time, first at Fiorentina (2019-2021), then at Salernitana, where he helped maintain the club, but also knew a series of injuries.