Benfica, eliminated in the quarter-finals of the last Champions League by Liverpool, confirmed their success obtained last Wednesday in the first leg against Dynamo kyiv (2-0) by winning 3-0 at their La Luz stadium. 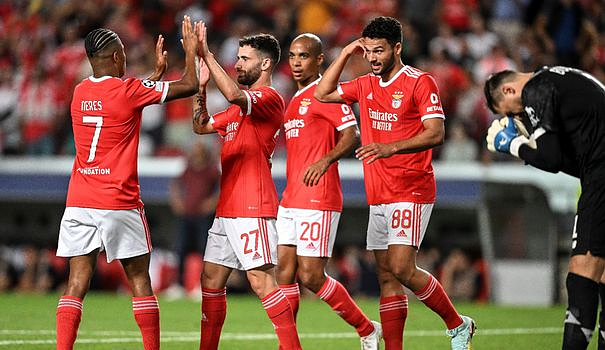 Benfica, eliminated in the quarter-finals of the last Champions League by Liverpool, confirmed their success obtained last Wednesday in the first leg against Dynamo kyiv (2-0) by winning 3-0 at their La Luz stadium.

Otamendi from a corner (27th), Rafa Silva (40th) and David Neres, with a beautiful curling left foot shot in stride (42nd), were the three scorers who put an end to the Ukrainians' C1 dream, including the championship resumed on Tuesday, despite the Russian invasion.

Benfica striker Gonçalo Ramos, author of 4 goals in 4 preliminary round matches, came out with a bloody face after a clash with Rafa Silva (51st).

The Israelis of Maccabi Haifa, for their part, obtained their qualification in stoppage time on the lawn of the Serbs of the Red Star of Belgrade after an own goal from midfielder Milan Pavkov (2-2, 5-4 in aggregate) .

First led, the Czechs of Viktoria Plzen turned the tide and also validated their ticket for the C1 by winning at home (2-1) against the Azerbaijanis of Qarabag (0-0 on the way) .

The losers of the play-offs, the last stage before the Champions League, are transferred directly to the Europa League.

On Wednesday, the return matches of the other three play-offs will pit Dinamo Zagreb against Bodo/Glimt (0-1 in the first leg), Trabzonspor in Copenhagen (1-2) and PSV Eindhoven against Glasgow Rangers (2-2).

Results of the return matches of the play-off played on Tuesday August 23: