Flying taxis in Paris in 2024? Three questions about these new kind of vehicles

Paris is already the city of the future. 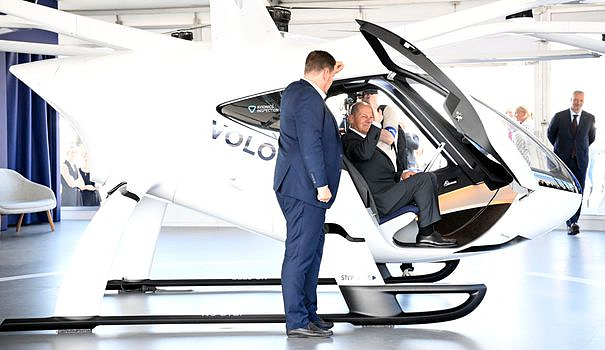 Paris is already the city of the future. For the first time in Europe, Thursday, November 10, an electric flying taxi rose and flew in real conditions above the Pontoise aerodrome, in Val-d'Oise. Named "Volocity", this new means of transport should prove itself during the Paris 2024 Olympic Games, before perhaps winning the rest of the country, or even the continent.

These Ubers from the sky are expected in Paris and its region by the Paris 2024 Olympics. While tourists from all over the world will be gathered in the capital, the German company Volocoptere sees this event as the perfect showcase for this new way of decarbonized transport. Some tickets should even be sold during the event. A dozen devices should thus be deployed in Ile-de-France, each of which can perform two or three flights per hour thanks to quickly interchangeable batteries.

For Volocopter, the challenge now lies in obtaining the numerous regulatory authorizations to be able to fly its taxis. In particular, it expects that of the European Aviation Safety Agency (EASA). To prove that the VoloCity are safe, they will be subject to the "same safety rules as Airbus or Boeing aircraft", said the CEO of the company, Dirk Hoke, on November 10 during the Pontoise inauguration. That is, an acceptable technical margin of error of only one in a billion.

The "vertiport" of Pontoise, 35 kilometers north of Paris, is the first in Europe. It is in this installation that the airport manager ADP, the RATP, the Ile-de-France region and the German aeronautical manufacturer Volocopter have been carrying out machine tests for a year. In addition to this, two overhead lines are planned, one between Paris and Versailles, more precisely between the heliport of Issy-les-Moulineaux and the aerodrome of Saint-Cyr-l'École. The other would link Charles-de-Gaulle and Le Bourget airports to intramural Paris, a barge on the Seine quai d'Austerlitz.

With their insect-like appearance, these air taxis are in reality neither planes nor helicopters, but "vertical take-off and landing machines in real conditions", or "eVTOL" in English (electricvertical take-off and landing) . These are electrical devices capable, thanks to their 18 propellers and 9 batteries, of moving at 110 km/h, at an altitude of 400 to 500 meters. According to Volocoptere, they are 4 times less noisy than a helicopter.

The two-seater VoloCity will carry a paying passenger, the other seat being reserved for a pilot, pending autonomous versions. Eventually, they should be able to carry up to 4 passengers and fly without a pilot. The hospitals of Paris (AP-HP) also hope to be able to use them one day to carry out emergency transport "of biological material, lightly injured or specialized doctors" on board these devices.