On a city trip, one often first studies the metro line network. 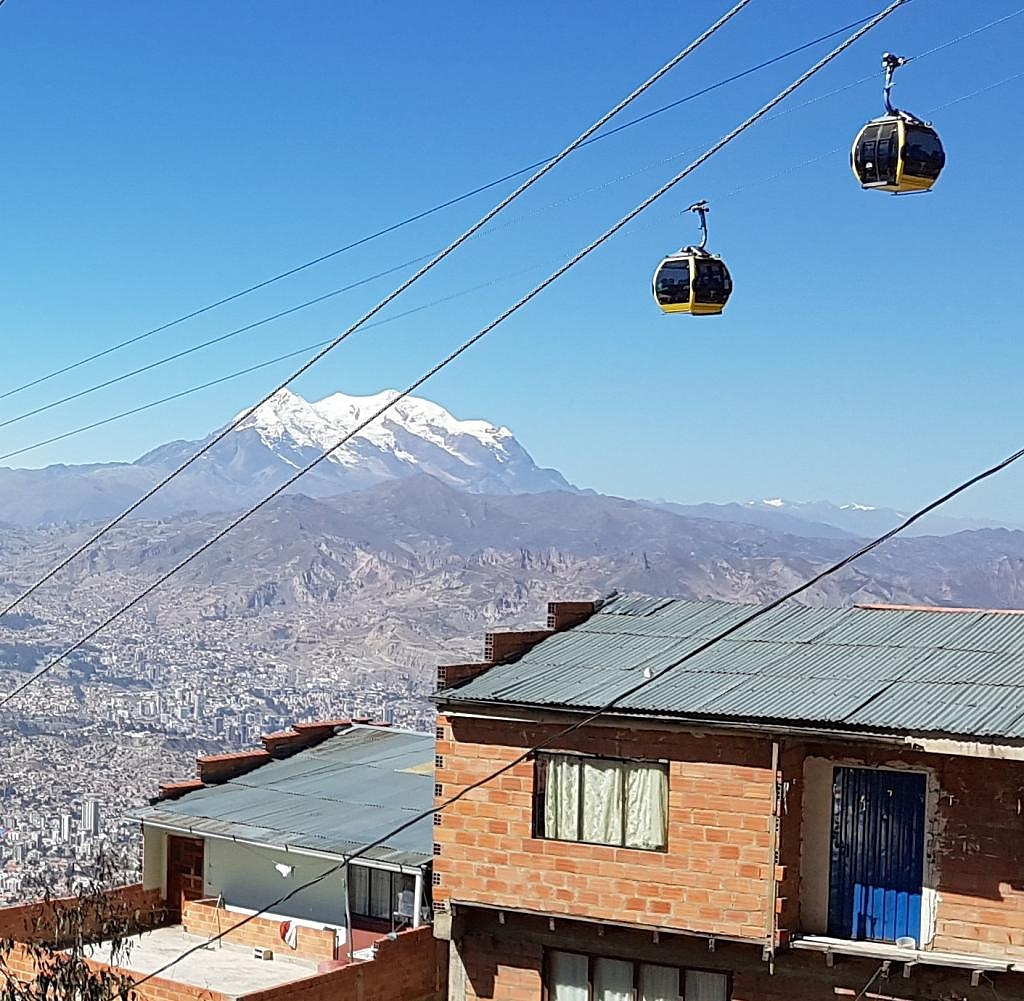 On a city trip, one often first studies the metro line network. In the Bolivian city of La Paz, on the other hand, the plan of the Mi Teleférico - "My cable car" in German. With more than 30 kilometers spread over five lines, the city with the seat of government of the South American country has the world's longest route network of its kind.

The first line was opened in 2014. It connects the Jach'a Qhathu mountain station in the neighboring city of El Alto, which together with La Paz forms the largest metropolitan area in Bolivia, with the Taypi Uta valley station in La Paz. Those who ride the gondola experience some of the most spectacular views in the country. The difference in altitude between El Alto, once a district of La Paz, and the villa districts in the southern valley is around 1000 meters.

Originally, the floating and affordable means of transport connected the city center to the slums. It is now also popular with tourists. High above the noisy streets, you keep an overview.

The panorama of the snow-covered peaks of the Andes, first and foremost the almost 6500 meter high Illimani with its secondary peaks, is fantastic, no matter which line you take. Various providers organize city tours with the city cable car - these are then more expensive than the simple ticket for the equivalent of around 45 cents. (miteleferico.bo)

The operators Grün Berlin praise the capital's only cable car as an "innovative and sustainable means of transport". It sounds as if it was planned, as in other cities, to relieve local public transport. But it is a remnant of the International Garden Exhibition 2017, which transported visitors through the famous Berlin air.

A remnant to behold. When you climb into the gondola, here in the high-rise district of Marzahn, you almost feel like you're in the Alps. In fact, the means of transport comes from one of the world's leading cable car manufacturers: Leitner ropeways, headquartered in South Tyrol, has already created a number of cable cars in high mountains, including the Matterhorn Glacier Ride in Zermatt in Switzerland - the world's highest of its kind.

The capital city cable car, on the other hand, is only 1.5 kilometers long, the journey takes only five minutes and there are only three stations. But the views from a height of up to 35 meters are worth seeing and surprisingly diverse - especially from those cabins that have a glass floor in addition to panorama windows.

In good weather, Berlin city center can be seen in the distance. Directly in front of you, the panorama changes from the gray high-rise canyons of Marzahn and Hellersdorf to the green of the Kienbergpark. You look over the shimmering water biotopes of the Wuhletal and a short time later down to the Gardens of the World.

The huge park with eleven themed gardens from all over the world, international garden cabinets, water gardens and art objects is worth a trip anyway. From the air, the bright colors of the autumn leaves and the late-blooming perennials can be admired well in advance.

U5 passengers who change at the Kienberg underground station in Hellersdorf have a connection from the center. From the Kienbergpark valley station it goes to the Wolkenhain mountain station on the Kienberg. There you can get off for a stopover and visit the Cloud Grove viewing platform. Then you take the gondola back down to the valley station Gardens of the World in Marzahn. Return ticket for adults: 6.50 euros. (gruen-berlin.de/projects/infrastructure/ropeway/)

Rush hour is a time-consuming stress for residents and tourists alike - not to mention the environmental impact. In order to relieve public transport in the Turkish capital Ankara, a nice alternative was put into operation there from 2014.

"The largest urban ropeway project on the Eurasian continent," proudly calls it the manufacturer Leitner, who also designed Berlin's ropeway. Over 3204 meters and four stations, it connects the Şentepe district with the Yenimahalle metro station on one of the city's main traffic arteries at the foot of the Köroğlu Mountains.

During the 14-minute one-way journey with the Himmelstram, you save a lot of time despite the leisurely travel speed of around 20 kilometers per hour: On the ground, where car avalanches are the order of the day, commuting to the city center sometimes takes up to an hour. The gondolas designed for ten people float above the roofs at an average height of 60 meters. Because it can get freezing cold in Ankara in winter, the seats can be heated.

If you plan to visit, you can park your car at Şentepe train station and take a tour. You can get off at Yenimahalle (translation: “new district”) and combine the trip with a visit to the sights of the young district, which was built as a residential area in the 1950s.

Ironically, the oldest bridge in Ankara (Akköprü) from the early 13th century is located there. The park of the Atatürk Forest Farm (Atatürk Orman Çiftliği) invites you to take a walk and to visit the Atatürk House, which was faithfully reproduced from the birthplace of the founder of the state in Thessaloniki. The ticket price for the cable car is low at the equivalent of 60 cents. (ego.gov.tr/en/sayfa/1082/teleferik; ego.gov.tr/en/sayfa/2098/tasima-ucretleri)

You can already tell from the name of the ticket "Cable Car Sky Pass": Singapore's city cable car was built from the ground up as a tourist attraction. Since 1974 it has connected the offshore island of Sentosa, which is a popular excursion destination thanks to the amusement park, butterfly farm, seawater aquarium, wax museum, golf course and rainforest nature trail, with Mount Faber, the almost 100 meter high local mountain of the Southeast Asian city-state.

The gondolas of the Mount Faber line travel the full length in up to half an hour. Again, the prospects are brilliant. And exotic: under the gliding cabins, the rainforest thrives on the mountain slopes, you have a view of the skyline, floating over the port of Singapore, one of the largest transshipment points in the world.

In 2015, a second line, the Sentosa Line, was put into operation, with which you can even get a bird's eye view of sandy beaches. Your island stop is at Images of Singapore, the city's historical museum.

And there is another indication of the tourist purpose of the cable car that doesn't quite fit into the everyday reality of public transport: "Dining Experiences" can also be booked, from four-course menus to bento boxes. A ride on the Singapore cable car costs from around 21 euros, and if you dine, you have to spend a lot more. (mountfaberleisure.com/attraction/singapore-cable-car)

Opened for the 2012 Summer Olympics, the British capital's aerial cable car has become a top tourist attraction: "Over the past decade, the London Cable Car has attracted tens of millions of visitors and secured its place as a must-see attraction in Britain," said recently according to British newspaper reports Josh Crompton of operator Transport for London (TfL).

Around 1.5 million passengers use the cable car every year – many of them as a pastime that broadens perspectives: the gondolas swing about 50 meters above the Thames between the Greenwich Peninsula and Royal Docks stops. It's hard to keep an eye on more London: St. Paul's Cathedral, The Shard, the entire skyline. And the huge Thames Barrier, designed to protect London from the forces of the North Sea, which pose a potential hazard even upstream.

Ten people can board each gondola, the single journey takes around ten minutes. Single tickets for adults cost the equivalent of around 5.70 euros, children pay half. (visitlondon.com/things-to-do/place/25549367-london-cable-car)

Adrenaline junkies race towards the harbor basin at up to 80 kilometers per hour. Dubai's newest attraction is the world's longest cable car in one city, and not for those afraid of heights. You start from a height of 170 meters.