FKK in Germany is experiencing a revival

“At first it was a strange feeling to undress. 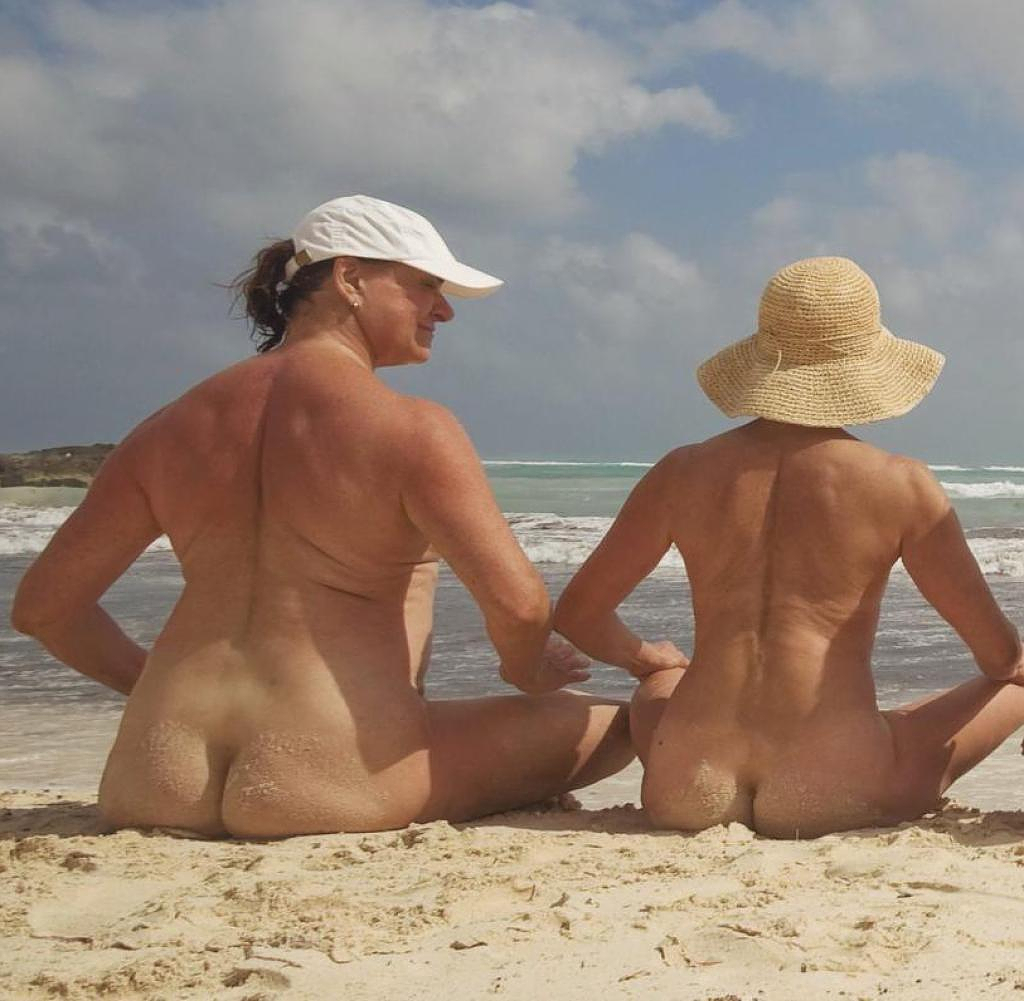 “At first it was a strange feeling to undress. You think everyone is watching. But then nobody looks. They're all naked." Many describe their "first time" like the family man from Hesse on the nudist beach of Cuxhaven-Duhnen.

For five years now, he and his wife have been coming to "Nackedonia", as the locals call the section, every summer with their daughter (10 today) and son (12). At first, profane reasons would have brought her here: better parking, more peace and quiet, lots of space, places sheltered from the wind.

The family is now enthusiastic, and at home they also prefer a bath with a nudist area. "The swimming trunks are just annoying," reports the son. "Yes, being naked is nice," says the father. “And we like the atmosphere. Friendlier, more familiar. Also more tolerant. Fat or thin, it doesn't matter here. You are not appraised like on the textile beach.”

The vacationers from Hesse are part of a group that is growing happily. One sees more naked people on many beaches of the North Sea and Baltic Sea and at the nudist bathing areas of Berlin and Hamburg. Above all: more newcomers, more young people, families, international guests. Associations and tourism professionals confirm that the demand for Nakation (Naked Vacation) is increasing.

“Naturism is on the rise. This can also be seen in the increasing popularity of 'nudity' such as hiking or cycling without clothes," says Sönke Reise, chairman of the newly founded association GetNakedGermany. “With the nudist clubs there is or was actually an aging problem. However, this is changing, even traditional clubs are rejuvenating.”

They rename themselves (e.g. the league for free living founded in 1949 in Naturist Camping am Flemhuder See Kiel) and offer contemporary, modern service. They rent out tiny houses or set up fiber optic connections on their premises.

"We are currently experiencing an upswing, as many people long for places where they can be undisturbed in nature," observes Michaela Toepper, Vice President of the DFK (German Association for FreiBodyCulture).

Founded in Kassel in 1949, the umbrella organization today connects more than 130 nudist clubs – and their club grounds with bathing and other leisure facilities. After the number of members fell or stagnated for years, according to the most recent survey (from autumn 2021) there is now an increase again to 32,531, plus 2.6 percent compared to the previous year.

Corona may have played a role in this. "Holidays in Germany were popular," says Martina Vavra, national chairwoman of fkk-jugend, an association for people up to 27 years of age. “And since our club grounds are little paradises, many new members come. With us, these are mostly young families.”

Even outside of clubs, more people are discovering naturism, at lakes, by the sea, in the countryside. After all, it's in line with other trends like being close to nature and body positivity, the ability to like your body even when it's not perfect.

US studies found that nudity increases self-acceptance. Added to this is the well-being and feeling of freedom of being out in the fresh air without annoying swimwear: once you have tried it, you often stick with it.

Wind on the skin, back to nature, nothing between me and the sea - it seems as if the tradition of naturism in Germany is actually experiencing a revival after a long lull. The world's first nudist club was founded in Essen in 1893. The life reform movement sought to break out of the unhealthy and unnatural conditions that prevailed in the industrial cities. In the 1920s the initiative grew. After 1933 it was banned by the Nazis.

What many do not know: There was also a ban on nude bathing in the GDR. Only after violent protests by the population was it lifted in 1956 - for marked places. FKK was booming, not only in East Germany.

In the 1968 movement in the West, nudity was considered liberation from philistinism. Anti-authoritarian parents let their children play naked. The naturist destination Sylt experienced a new onslaught: "There's a bare ass hanging in every wave," remarked Romy Schneider after visiting the island in 1968.

Isabell Kroner from Euronature, specialist for naturist holidays: "This year there is a surprisingly high number of inquiries, which can no longer be met due to a lack of availability." There is very strong demand from families with several children. They were looking for nudist facilities that were close to nature, especially in France, with offers for all age groups.

And another development is noticeable: comfort is required. "Most of the guests are interested in higher-quality accommodation, but the offer of equipped tents that offer absolute deceleration in the midst of nature is also used," says Euronature. Many vacationers would spend more money on it.

There is also a "recognizable trend towards at least one second naturist trip per year". In Croatia, the most popular travel destination for German naturists, inexpensive nudist resorts have been converted into textile facilities, but higher-priced nude bathing facilities such as "Valalta" have been modernized and expanded, says Wolfgang Weinreich from the nudist tour operator Miramare.

Resorts in France also received refresher treatments, such as the oldest nudist resort of all, the "CHM Montalivet" on the Atlantic coast near Bordeaux. In general, it seems that France is ahead of Germany when it comes to nudism.

Our neighboring country can also look back on a long naturist tradition - and has already experienced a revival earlier. “In fact, a new enthusiasm for naturism has been evident over the past ten years. Young urban families want to spend their holidays as close to nature as possible, while experiencing values ​​such as respect and authenticity,” says Philippe Champetier, co-managing director of France 4 Naturisme, which claims to be the largest naturist holiday operator in France.

After two years of the corona epidemic, there has now been a very sharp increase in bookings from Germany - the most important foreign clientele for their destinations on the Atlantic and Mediterranean.

The group operates six superior naturist holiday villages with bungalows, chalets, mobile homes and tents for rent. According to Euronature, there are not enough offers in this form in Germany, although there is demand.

There is also increasing demand for German nudist destinations from abroad. At the Müggelsee in Berlin, for example, you can see more and more naked vacationers from the USA, where reports on nacation as a travel trend were already reported in 2018.

And on the nudist beach of Ahlbeck on Usedom, within walking distance from the seaside resort of Swinemünde in Poland, you can see a growing proportion of Polish visitors. In the predominantly Catholic country, nudity is still a taboo, confirm Frank Straka of Travelnetto, a tour operator for Poland, and Peter Rijnvis, president of the Polish Naturist Federation, which only has around 100 members. So you discreetly dodge to more liberal countries.

Which beaches are perfect for naturists? The booking and rating platform Holidaycheck lists these as the best in Europe:

Kampener Strand, Sylt: The section at the legendary "Buhne 16" on Sylt has been famous for decades. With bistro and beach sauna.

Playa el Mago, Mallorca: On the west coast of the island, it is sheltered in a picturesque bay, shaded by pine trees and shrubs.

Hvar Beaches, Croatia: Naturist Island Hopping - from the beach of the fishing village of Zavala on the south side of the island to the mini-island of Jerolim.

Faliraki, Rhodes: The island's only nudist beach lies between Textile Beach and Anthony Quinn Bay. Everywhere else in Rhodes skinny dipping is forbidden.

‹ ›
Keywords:
FKKReisenFKK (Freikörperkultur)StrandurlaubDeutschlandLänderporträtsCampingCampingplätzeCampingreisenReiseveranstalterAnthony QuinnDDR FrankreichHessenFalirakiAtlantikEssenEuropaNaturismusSwinemündeOstseeFrankfurt Am MainReiseFranceKroatienRhodoBündnis 90Die GrünenDucasse Schetter PRMittelmeerUSA
Your comment has been forwarded to the administrator for approval.×
Warning! Will constitute a criminal offense, illegal, threatening, offensive, insulting and swearing, derogatory, defamatory, vulgar, pornographic, indecent, personality rights, damaging or similar nature in the nature of all kinds of financial content, legal, criminal and administrative responsibility for the content of the sender member / members are belong.
Related News