"It completely ruined five years of my life," she said in an interview with AFP. 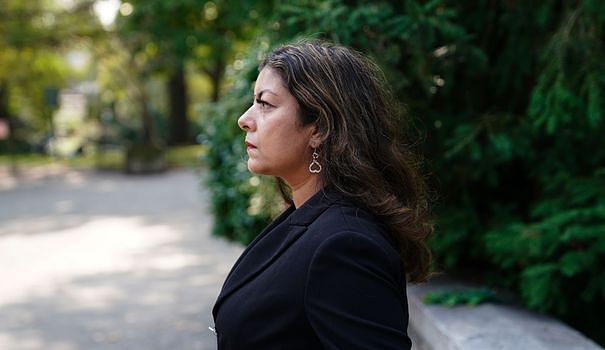 "It completely ruined five years of my life," she said in an interview with AFP.

But "when you have the means to change a society to install better rules, better laws", "without calculating it, without anticipating it", "yes, it is a satisfaction", she adds.

In October 2017, Sandra Muller is already living in New York. On the 5th, the New York Times article comes out on the accusations of sexual harassment against the powerful film producer Harvey Weinstein. "I started reading frantically everything there was on the subject, not being able to help but draw parallels with our environment", journalism, says Sandra Muller, 51 years old.

By dint of "swallowing all the testimonies for almost a week", the feeling grows that she has a responsibility: "We are journalists, we must appoint", she says she thought at the time.

So on October 13, 2017, two days before actress Alyssa Milano's famous tweet that will blow up the

Eric Brion acknowledged "inappropriate comments" and apologized; but claiming to be the subject of an "amalgam between heavy flirting and sexual harassment", and deploring the consequences for his own personal and professional life, he attacks it and wins the case at first instance: Sandra Muller is sentenced for defamation .

On appeal, however, justice recognizes the journalist "the benefit of good faith", and the Court of Cassation confirms it.

During these almost five years, it was often "violent", says Sandra Muller. Accused of having thrown a man's name into the woods, she defends her word.

"I never said Eric Brion was a rapist," she says. But we must "knock out" what is considered "the lowest level" of aggression, namely verbal aggression, to hope to fight against physical violence, she argues.

Not everyone is of this opinion. "I suffered both virtual and real attacks. I was the awful witch who had dared to speak", says the journalist of the Letter of the audiovisual, while evoking the trolls on the social networks, the backlash on her private life -- "rejection reactions", a worried family -- as well as professional.

"It's difficult to find the life before, I'm just starting," she adds.

Lately, freelancers are coming back, slowly, she explains.

And despite the difficulties, she considers that the results, five years later, are worth it.

Before, many people who engaged in harassment or worse "could go ahead with impunity, do what they wanted with an organized general silence, considerable support". Today, "these people will think twice before coming to attack", she wants to believe.

Admittedly, the question of the prescription of the facts in France remains "central" and "there will always be more laws to be made, more mobilization, education" in particular of boys.

"But I still think that in five years we have evolved a lot when compared to the last 40, right?" she says.