Five good reasons for vacationing on Sylt in winter

When the snow covers the landscape and the thatched houses like powdered sugar, Sylt is transformed into an idyllic winter wonderland. 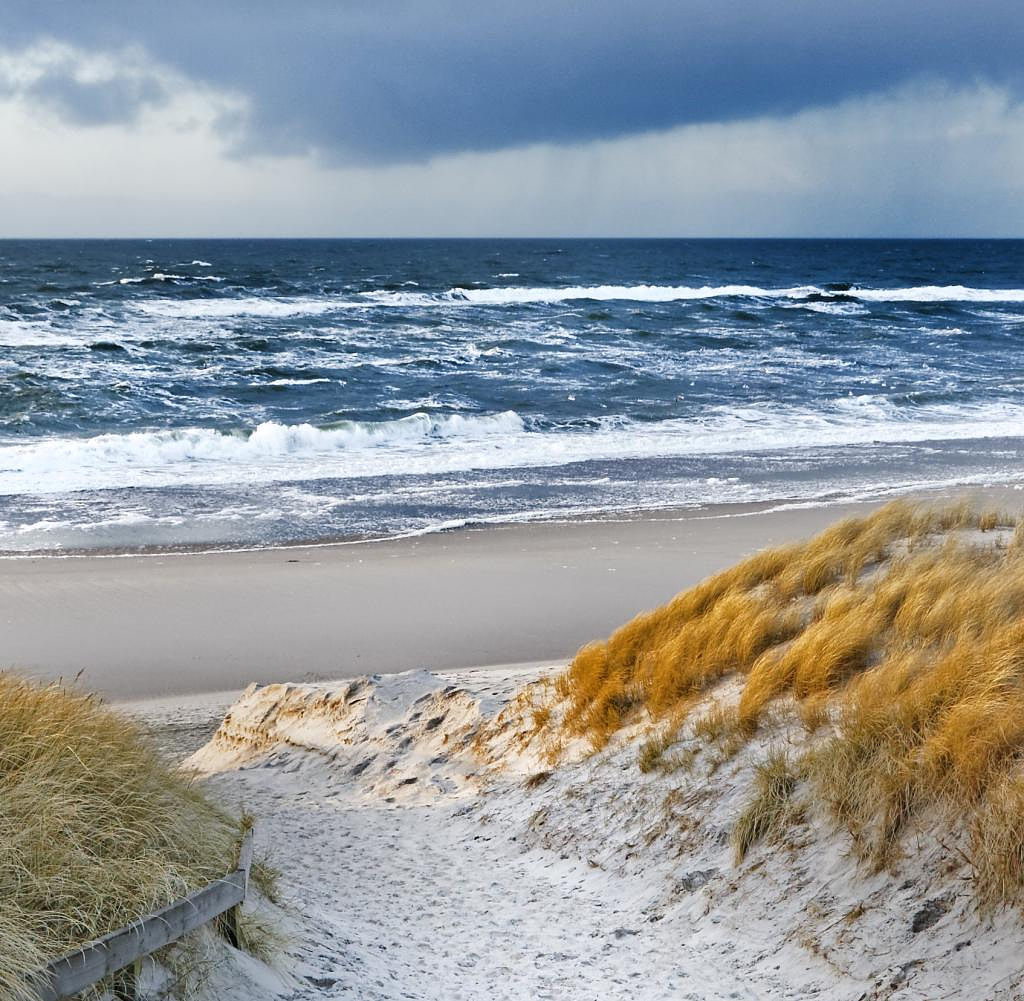 When the snow covers the landscape and the thatched houses like powdered sugar, Sylt is transformed into an idyllic winter wonderland. In the cold season you have the island almost to yourself and you can enjoy intense peace and seclusion in the great outdoors. And there are even more reasons to travel to the island right now, like the following five reasons:

Keitum, one evening. The water has run out and the mud flats lie still in the early night. You can hear the soft cackling of geese and obscure birdcalls in the night sky over the receding sea. It smells cold and delicious of the sea, of wood smoke from the chimneys.

The starry sky is clear and magnificent above the mud flats. Then a fat moon slides over the distant mainland coast, glowing red. It's magical and fairytale like. Low, ruffled clouds give the night horizon a spooky character.

The lonely wanderer stands fascinated in front of this spectacle; it is unearthly beautiful. The moon's halo is discarded in the Watt as if by a cracked mirror. The higher the moon rises, the brighter the red becomes; first mandarin, then bright copper, soon it stands like a strange silvery sun in the night sky.

Captains from Sylt sailed as far as East Asia and the West Indies. Keitum was their home, and even today the old captain's houses bear witness to the wealth that they once brought home from the sea. In addition to paintings of ships and commanders, all kinds of exotic things from distant countries can be seen in the Sylt Museum; a Chinese compass or coins, for example.

Here, as well as in the Altfriesisches Haus next door, a local history museum, it is a sightseeing tour into the past - you walk over creaking floorboards and under old, low ceiling beams that still smell slightly of smoke. It has long been dark and the streets of Keitum are empty. A deep peace lies over the place. And something mysterious when the trees swaying in the wind cast bizarre shadows on the houses.

The nearby church of St. Severin is also reminiscent of seafaring: with a door handle in the shape of a whale that has been polished by thousands of hands. And with a model ship hanging from the ceiling in the antechamber of the church. If you look closely, you will recognize the flag of Schleswig-Holstein - but that did not exist when this ship was made and hung up.

Sylt was Danish and the model is going to Copenhagen. And the Schleswig-Holstein flag? At that time symbol of the independence movement. What had consequences; the pastor, who once allowed so much enigmatic revolutionism, is said to have been transferred to a remote Hallig as a punitive measure. In the St. Severin cemetery there are tombstones that commemorate seafarers.

From the Ostindienfahrerhuk in the north-west of Sylt, the path leads eastwards onto the elbow. Even in summer this is a place of rest, in winter it is completely out of the world. They are paths to solitude on a beach without a trace. The morning sky in soft blue, the night is still in the sky. Mountains of clouds over the sea glow reddish-pink, the last stars go out. And the lighthouse guide flashes across the deserted end of the island.

The surf runs out hissing on the sand. Beach grass rustles in the wind, winter floods have thrown a little flotsam up to the edge of the dunes – boards and ropes, helmets and buoys. Lost and forgotten among the strands of beach grass with which the wind has written circular patterns in the damp sand.

Light now floods the beach. Two pricks stand lost in the sand, the tree trunks are actually used to mark fairways in the sea. Six or eight meters high, they mark something else here - the northernmost point in Germany, its coordinates: 550 3' 30 North, 080 24' 55 East. But what about the route from here to the water? No more Germany? A place of transition; sometimes the sea goes up to the dunes, sometimes it lies still.

No one, nowhere, just sheep droppings everywhere. The sharp dune grass slaps your legs to the rhythm of the wind. The sound of the sea slowly seems to mix with the roar. It can't be far. Now it's not a place for tourists, but even more so for seals on the beach. At the east end of the elbow lie dozens of animals. The harbor seals are in the majority, with a few gray seals in between.

The conservationists have stretched ropes and cordoned off an area so the animals won't be disturbed. A walker might want to stop by. The rope sways in the wind and a seal - or a seal? – looks up briefly, then dozes on. And since! More cheeky snouts appear in the waves...

In Rantum, on the dike. Sylt is also the winter destination for feathered guests. Birds from the far north make their home here and if the ice conditions are not too harsh, not all native species necessarily migrate. A particularly good spot for observing – and for a nice walk – is the dyke around the Rantum basin: on the one hand you walk higher up and have a good vantage point, on the other hand you have a view of the mud flats and the water.

A good time for the Vogelkiek is when the water is running up or when the water is high. Because then the birds that go in search of food in the mudflats come back to the edge; high density and great variety. Whole swarms fly into the salt and marsh meadows is wonderful, lost in the world on the kilometer-long dyke the longing calls of the geese over the sea are a particularly impressive experience.

Walkers have already discovered snow buntings on the dyke, these are guests from the Arctic. If you are lucky, you can spot the goldcrest with binoculars in the bushes or in the pine forest on the western side of the pool: a tiny bird with a golden crest and a pretty clown-like face.

Say rum and people think of Northern Germany. And in the cold winter, no island resident or visitor has to justify a warming glass in between. At the small harbor in Rantum, Sylter Trading sells not only their trader whiskey, but also various types of rum that have matured in barrels. The rum comes from Trinidad in the Caribbean or Panama and from the island of Mauritius in the Indian Ocean.

These spirits made from sugar cane have already matured for five to ten years when they are laid to rest a second time in their own barrel store on the island. Also in former port wine or sherry casks, which gives the rum additional aromas.

How does the smell and taste of the rum develop in the various individual casks before bottling? Meinert Petersen and his partners will taste and carefully look after the casks in the airy warehouse on the Wadden Sea. The special climate on the North Sea is good for the rum variations; the brandies absorb the different aromas from the wood, connoisseurs attest to notes of raisins, plums, vanilla and chocolate, among other things.

Warming up with a drink after a walk on the beach – you can do that at Kontorhaus Keitum too; the aroma of tea is in the air and soft piano music lulls the guests. It is a place of cultivated relaxation.

The tea menu is varied and there is a large selection in the shop. The staff meets regularly for trial rounds, selects what is perfect and fits into the portfolio. From down-to-earth blends to rarities of exotic origins such as Japanese shadow tea, a green tea with little bitterness and a stimulating taste.

Have you just arrived on Sylt? Then maybe a Friesian mix would be good; it is strong, malty and caresses the senses when you look back and forth between the clouds of cream in the cup and the snow drifting outside the window pane.

Participation in the trip was supported by Sylt Marketing. You can find our standards of transparency and journalistic independence at axelspringer.com/de/Werte/downloads.

This article was first published in February 2022.

‹ ›
Keywords:
DeutschlandLänderporträtsSchleswigHolsteinRegionenporträtsSyltInselporträtsStrandurlaubNordseeRpblNordfrieslandDeichRantumKaribikAltfriesischen HausIndische OzeanNorddeutschlandWattenmeerSpiegelReiseEuropaKeitumMondWesterlandOstindienfahrerhuk
Your comment has been forwarded to the administrator for approval.×
Warning! Will constitute a criminal offense, illegal, threatening, offensive, insulting and swearing, derogatory, defamatory, vulgar, pornographic, indecent, personality rights, damaging or similar nature in the nature of all kinds of financial content, legal, criminal and administrative responsibility for the content of the sender member / members are belong.
Related News