Fire in Gironde: "vigilant optimism" after a calmer night

"The fire has not progressed. 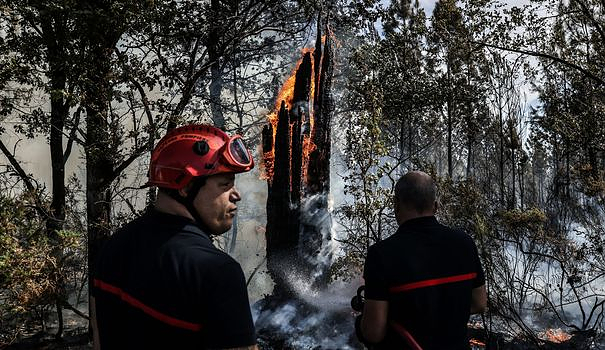 "The fire has not progressed. No new burned surface. No new evacuation", tweeted early in the day the prefecture of Nouvelle-Aquitaine.

A positive observation after three days of struggle. The weather conditions "were favorable all night long", said Lieutenant-Colonel Eric Pitault, communications officer for the Girondins firefighters, even if the fire "is still there".

"The humidity level has risen above 95%. This rate will be above 50% all day, which is rather reassuring", added the sub-prefect of Lesparre-Médoc Fabrice Thibier during a press briefing on Thursday. morning, in a relaxed atmosphere.

The wind is "relatively weak until 2 p.m." and the temperatures "will rise to 26, 27 degrees in the afternoon", according to Eric Pitault.

The reconnaissance work of the teams on site was nevertheless slowed down in the morning by a "strong fog", "dangerous" for visibility.

In a phase of "stabilization of the fire", forestry work is planned to "avoid resumptions": "there are four bulldozers currently at work on the site and four others will arrive in the afternoon", as well only four harvesters "who will work as soon as the weather conditions allow it" to keep the fire within its perimeter.

On Wednesday, a thousand firefighters, helped by teams of volunteers from the Defense of Forests Against Fires (DFCI) and by six Canadair, three Dash planes and two water bomber helicopters, intervened to contain the fire, and fight against 21 covers of this one.

Since Monday, 3,700 hectares have been burned, in addition to some 30,000 already ravaged since July by three gigantic fires in the department, in La Teste-de-Buch and Landiras twice, in a context of historic drought.

In total, 1,840 inhabitants were evacuated in the municipalities of Saumos and Saint-Hélène, in this southern zone of the Médoc between the seaside resort of Lacanau, on the Atlantic coast, and the Bordeaux agglomeration.

For the moment, it is "premature" to consider a return of the Sainte-Hélénois to their homes, tempers the sub-prefect, although everything is "implemented so that we can get the inhabitants back to their homes as quickly as possible. dwellings".

A point will be made at the beginning of the afternoon.

Another fire, in the south of the region in the Basque Country, burned about fifteen hectares on the border massif of La Rhune, mobilizing around forty firefighters, a Spanish water bomber helicopter as well as three Canadairs and two planes. Dash came as reinforcements.

Wednesday evening, around 11 p.m., the fire was under control, according to the Pyrénées-Atlantiques prefecture.