The former Keeper of the Seals of Nicolas Sarkozy (2010-2012) is prosecuted for "embezzlement of public funds" in the company of his wife Joëlle and his daughter Delphine, all three present for the first day of this trial which must be held until to November 10. 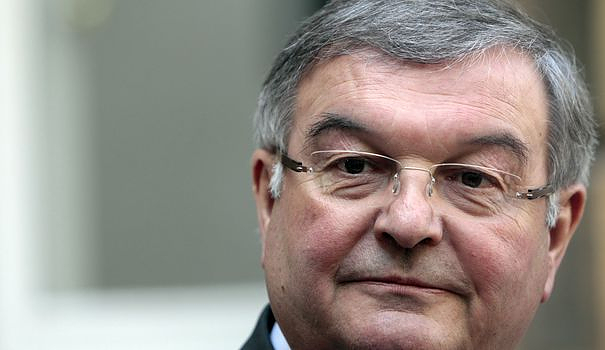 The former Keeper of the Seals of Nicolas Sarkozy (2010-2012) is prosecuted for "embezzlement of public funds" in the company of his wife Joëlle and his daughter Delphine, all three present for the first day of this trial which must be held until to November 10.

The charges, which range from 2005 to 2014, date back to Mr. Mercier's past mandates in the Rhône department, where he was a senator and president of the general council, at a time when family parliamentary jobs were not yet prohibited.

The hearing set out to determine the reality of the work carried out by Delphine Mercier between August 2012 and April 2014. The young woman was then living in London - she still resides there - but worked part-time as her father's parliamentary assistant. Over this period, the amount of his salaries amounted to 38,000 euros.

Problem: investigators from the National Financial Prosecutor's Office (PNF), who had opened the investigations following an article in Le Canard enchaîné in August 2017, found no trace of what she could have done.

At the hearing, Michel Mercier pleads peasant common sense against the "Parisians" of the PNF. If there is no written proof of this work, it is simply because he, the "senator from a rural environment" whose door is always open, is resistant to technology and computers which he does not never use.

"I have never received written notes from anyone," defends the former Minister of Justice. "I wanted the oral, just the oral. It was my way of doing it".

It is precisely to fill his gaps in terms of new technologies that he would have hired his daughter. Art historian, graduate of the Ecole du Louvre, she served as her "cultural adviser" and helped her to refine her positions in the matter, assures Mr. Mercier. “She taught me how to use technological means in culture (…) I wanted to be a little less bad in certain areas”.

When the court questions him about the use he made of this advice, noting that "culture was not a subject that came out of your work" parliamentarians, Michel Mercier kicks in touch.

He wanted to be ready if need be. But, he said, "I try to stay in my place, I never took myself for (Frédéric) Mitterrand or Stéphane Bern. My goal was to understand".

Another question remains unresolved, to which the court is due to return on Wednesday. To what extent Delphine Mercier's work would have been linked to the Musée des Confluences, at the time under construction on the Lyon peninsula and whose costs were slipping?

For Michel Mercier, who as president of the General Council of the Rhône was leading this project against which criticism was piling up at the time, it was only one of the facets of his daughter's work "as part of her mission monitoring of cultural news".

The PNF investigation also targets the activities of the wife of the former centrist senator, mayor of the small town of Thizy for 24 years.

The investigations would not have made it possible to find elements attesting to the reality of the secretarial or representation work carried out by Joëlle Mercier between 2005 and 2009, as parliamentary assistant to her husband. Estimated damage: at least 84,000 euros.

Mr. Mercier would also have instructed his wife to organize various cultural events intended to promote his re-election to the Senate but financed by the General Council of the Rhône, which he chaired from 1990 to 2013. As such, he also appears for "taking unlawful interest".

Finally, he must answer for a singular offense: "The embezzlement of public funds by negligence", for having hired a parliamentary assistant with whom relations had very quickly turned sour and to whom he had no longer entrusted the slightest task, without however terminate his employment contract.