Fermasa denounced the fact that the Concab Horse Fair celebrations are not guaranteed one month after they were held. 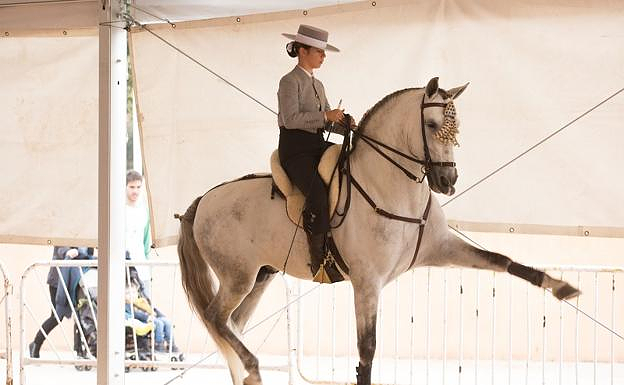 Fermasa denounced the fact that the Concab Horse Fair celebrations are not guaranteed one month after they were held. The Junta de Andalucia had not confirmed that it will continue to sponsor the event, which was held between 18 and 20 October.

They stated that it was unacceptable that important projects for the province were blocked. In 2018, more than 20,000 people visited Concab. Concab is one of the most important Spanish equestrian fairs. It brings together the top purebred Spanish stud farm participants in the qualifying conformation contest. This competition serves as a prelude for the World Championship which will be held in Seville in Sicab.

This fair would be celebrating its 20th anniversary this year. It is an important reference in the world horse racing and its next edition is uncertain.

Fermasa wonders if "the new government of Junta de Andalucia" of the PP "withdraws it participation in Concab, support for the province’s Fair institution", but insists that Fermasa "is more alive than ever and plays a significant role in economic growth and the generation of wealth."

"Fermasa continues its growth, we are in luck; we have been going upward, five years with positive outcomes, that makes it possible to say that our accounts and debt has decreased by 75%. The institution is happy with the pace of the improvement," they said.

They have been positive in 2018 with 36 events. This is an increase of 100 percent in 5 years. There has also been a significant rise in visitors to the event and more exhibitors coming from other provinces.

Delegate for Agriculture, Livestock, Fisheries and Sustainable Development says that Concabs are not held because of their Managers. Ma Jose Martin, the territorial delegate, denies the information provided by Fermasa.

To address the Trade Fair's situation, Dolores Canavate (the Manager of Fermasa) has met with several times. According to technical reports by the fair's management, a fair that has lost its livestock contest 'Concab’ in 2015, when the last payment was made, has not received any money from the socialist government.

The New Government of Junta de Andalucia also took over an invoice for 14,000 Euros from the 2018 'Bionatura’ subsidy, which corresponds to the Socialist Government.

These meetings saw MariaJose Martin, a delegate, express "institutional loyalty" to this Trade Fair and "the commitment of continuing with the collaboration for events this nature", as she herself pointed out.

Minister of Agriculture, Livestock, Fisheries and Sustainable Development has committed to a package of subsidies for Agricultural and Livestock Contests. This will allow fairs such as Fermasa to enjoy Concab content. During meetings with the New Government, the matter was also brought up by the managers and the mayor.

‹ ›
Keywords:
FermasaDicePuedeGarantizarCelebracionFeriaCaballoFaltaRespuestaJuntaAndalucía
Your comment has been forwarded to the administrator for approval.×
Warning! Will constitute a criminal offense, illegal, threatening, offensive, insulting and swearing, derogatory, defamatory, vulgar, pornographic, indecent, personality rights, damaging or similar nature in the nature of all kinds of financial content, legal, criminal and administrative responsibility for the content of the sender member / members are belong.
Related News