Felipe VI presents the Kingdom of Spain award to Cosentino.

Francisco Martinez-Cosentino will be the Chairman of the Cosentino Group and receive the Kingdom of Spain Award in Business Career this morning at Maestro Padilla Auditorium. 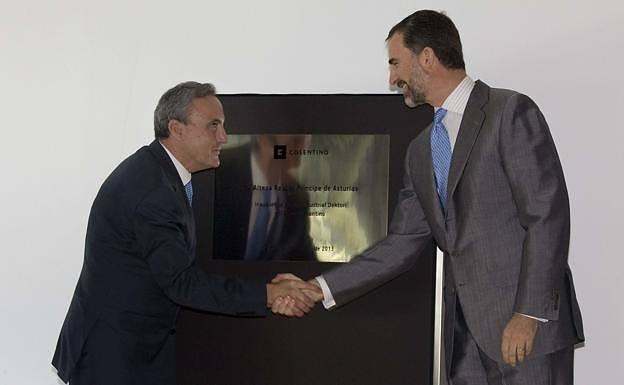 Carme Riera (member of the Royal Spanish Academy, Professor at the Autonomous University of Barcelona) was the president of the jury. The award will be presented on Friday of this month.

Its contribution to Spain's economic and social development over many decades of work, creating jobs, internationalizing its activities, and improving the country's well-being, and by combining its professional interests with artistic, social, and cultural causes. It is a model for the future.

During its six editions to date, the Kingdom of Spain Award has aimed to highlight the example for future generations of a relevant business figure that has carried out an important work in Spain in terms of job creation, investment and internationalization, and has contributed to the progress and well-being of Spanish society as a whole.

‹ ›
Keywords:
DirectoCosentinoRecibePremioReinoEspañaManosFelipe
Your comment has been forwarded to the administrator for approval.×
Warning! Will constitute a criminal offense, illegal, threatening, offensive, insulting and swearing, derogatory, defamatory, vulgar, pornographic, indecent, personality rights, damaging or similar nature in the nature of all kinds of financial content, legal, criminal and administrative responsibility for the content of the sender member / members are belong.
Related News