Fashion week begins in Paris with a "manifesto" of young designers

As is traditionally the case in Paris, priority for young people on the first day: the spring-summer 2023 women's ready-to-wear week kicked off with the show of Victor Weinsanto, 28, a former classical dancer trained by Jean Paul Gaultier before launching his brand in 2020. 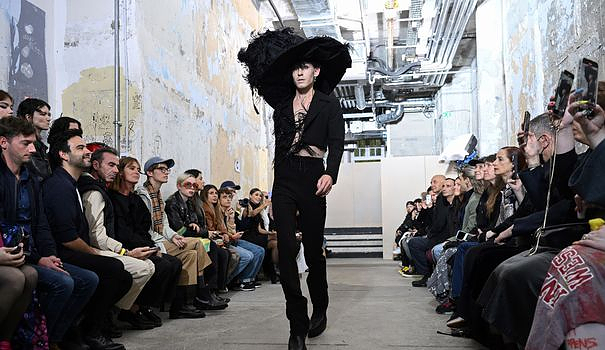 As is traditionally the case in Paris, priority for young people on the first day: the spring-summer 2023 women's ready-to-wear week kicked off with the show of Victor Weinsanto, 28, a former classical dancer trained by Jean Paul Gaultier before launching his brand in 2020.

This collection is "a manifesto of love from a generation, from my best artist friends, creators, performers," the stylist told AFP.

Something unprecedented, prominent fashion designers such as Charles de Vilmorin at the head of his haute couture house and artistic director of Rochas and the duo Kévin Nompeix and Florentin Glémarec, founders of Egonlab paraded with pieces inspired by their worlds and reworked by Weinsanto "in his own way".

"It's the quintessence of what young French designers are offering at the moment", sums up the designer.

"Kindness, creation, freedom, madness and humor are once again becoming the very essence of what we are looking for in fashion at the moment. We want to escape", underlines the stylist with blue eyes and orange hair, after wearing it pink for several seasons.

The image of "odious" creators in the 90s who "hated each other" is "cheesy" and "wickedness" is no longer a recipe, he says.

"Nobody wants that anymore", hence the idea of ​​"a big game of friends, a family reunion".

Made almost entirely from the fabrics of "dormant stocks" sold by luxury brands, the collection aims to be responsible and "inclusive", where a piece is meant to be "worn by mother and daughter".

With plump models of all ages, the cast is very varied, the attitude is free: we parade smiling and dancing just like with her mentor Jean Paul Gaultier, a pioneer in diversity.

"I like the idea that a garment has no gender, I sometimes dress masculine, sometimes feminine", says the stylist.

- "Fascinated" by the metaverse-

The parade will be followed by the launch in Paris of a project in the metaverse with the Kpop group Lightsum, whose singers will be present virtually, in holograms.

These are "wearable silhouettes that do not distort the girls in the group". NFTs, digital certificates of authenticity, will go on sale in the metaverse in October.

"I don't think it's essential" to have a project in the metaverse in addition to the physical parade," said Victor Weinsanto, while saying he was "fascinated" by this universe.

More than 100 French and international labels are registered for this edition of Paris Fashion Week which ends on October 4th.

Almost all of the houses have opted for physical parades, including heavyweights like Dior, Chanel, Balenciaga, Stella McCartney, Thom Browne or Issey Miyake.

After having paraded in New York and London, the British Victoria Beckham is spicing up this edition by joining Paris Fashion Week for the first time with a parade on Friday.