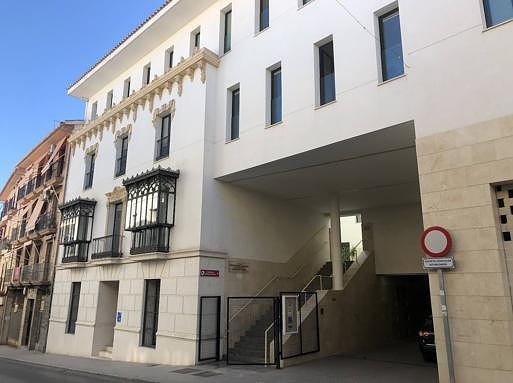 A desperate situation. Egisse managed sheltered housing for people who have disabilities. Their relatives made a statement requesting solutions to the state of emergency for their daughters. Jaen and Granada.

It could be translated as "families Alcala la Real La Pedriza, Frailes", which means that we have come together to ensure our daughters do not leave town and are not removed from their families, friends, and environment. When our daughters have lived in their hometown for many years, it is hard to accept the fact that Jaen and Granada's Junta de Andalucia has transferred them to sheltered homes. They believe that the Junta de Andalucia through the Ministry of Social Policies, and the City Council of Alcala la Real must search for optimal solutions where compliance with the Dependency Law's basic principles is guaranteed. This includes the permanence of individuals in their environment, quality, sustainability, and accessibility of care services, and cooperation between all the administrations.

They stated that the move to a new property or location would cause them to lose their family and social ties, as well as the "adaptation difficulties" they may face.

They met with Mercedes Linares, the mayor of Social Services, Health and Family, on Monday. Although they thanked her for her availability and good disposition in the process, they also announced that it is a competition which does not match the constary but the Dependency Agency. These young women's parents were present at the meeting and stated that they did not want their daughters taken, even if it was justified.

Mercedes Linares, for her part, told IDEAL that the council and the Social Services area had helped "as much as possible because the people who live there are users of Social Services, the occupational center, but the Dependency Agency manages them and has a company in charge." He assures that all the procedures within his reach have been considered in order that this apartment continues to offer the service. However, he admits that the provision of transporting these users to other locations would be "provisional" while a new solution is discovered.

This is a difficult situation because Egisse is currently in bankruptcy proceedings. However, the company's debts have been building for many years. Families who refuse to send their daughters to these temporary destinations could lose their places. This would be detrimental to their future options as they wouldn't be able choose for this service again.

‹ ›
Keywords:
DenunciaFamiliasPisoTuteladoAnteCambioUbicacionUsuarias
Your comment has been forwarded to the administrator for approval.×
Warning! Will constitute a criminal offense, illegal, threatening, offensive, insulting and swearing, derogatory, defamatory, vulgar, pornographic, indecent, personality rights, damaging or similar nature in the nature of all kinds of financial content, legal, criminal and administrative responsibility for the content of the sender member / members are belong.
Related News