Their talks in Washington with representatives of the White House, the State Department or Congress, under the aegis of the NGO Freedom Initiative, were held almost three months after President Joe Biden's much-criticized visit to Jeddah, where he met Crown Prince Mohammed bin Salman and Egyptian President Abdel Fattah al-Sissi. 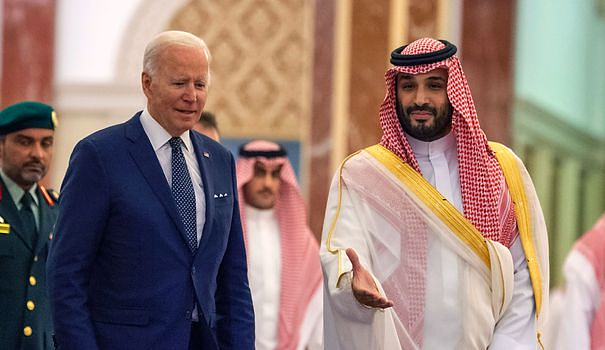 Their talks in Washington with representatives of the White House, the State Department or Congress, under the aegis of the NGO Freedom Initiative, were held almost three months after President Joe Biden's much-criticized visit to Jeddah, where he met Crown Prince Mohammed bin Salman and Egyptian President Abdel Fattah al-Sissi.

A trip that damaged the image of the American head of state. Before being elected, he had pledged to be the herald of democracy as well as to treat Arabia as a "pariah" because of the assassination of journalist Jamal Khashoggi, dismembered in 2018 in the Saudi consulate in Istanbul.

But his cordial "fist bump", fist to fist with the prince "MBS" in July, marked the spirits.

Although she says she never had any illusions that realpolitik usually trumps everything else, Sanaa Seif, the sister of Alaa Abdel Fattah, Egypt's most notorious inmate who is watching a strike of hungry for more than six months, said she was "disappointed".

The American officials met in Washington are "very sympathetic", but "nothing translates into concrete measures", she told AFP.

Pressure from Washington could, however, have an impact on the Egyptian government as well as on the British authorities and push the latter to act more, she argues. From his cell, his brother, sentenced to five years in prison for "spreading false information", became a British citizen this year.

As Cop 27 approaches, to be held in November in Egypt, the Palestinian Ramy Shaath, himself imprisoned for more than 900 days in this country, called on the United States to weigh in so that this conference on the climate does not not serve as "greenwashing" to the regime.

"The level of repression is becoming devastating" in Egypt, which has more than 60,000 prisoners of conscience according to NGOs, he insists. But President al-Sissi considers the United States and the European Union "as the main source of support, income, weapons," Shaath told AFP. Egypt receives more than $1 billion a year in direct US military aid.

Abdel Fattah al-Sisi "is sensitive to their pressures and even to their small criticisms, so I call on them for stronger criticisms", he said.

Lina al-Hathloul, the sister of Loujain al-Hathloul, a Saudi women's rights activist released from prison in 2021 but still banned from leaving the country, also told US officials that "the only concrete solution (was) to stop encouraging a dictator", in reference to the crown prince.

"You have leverage," she urged them.

Before Mr. Biden's trip to Jeddah, "we were clear with our message: if the administration will visit our countries without setting clear conditions when it comes to human rights, it will get worse and our oppressors will feel emboldened,” she told AFP.

"They promised us it wasn't going to happen" that way, she added. But the situation in Saudi Arabia is "clearly worse than before": "everyone is afraid", "people are being imprisoned for tweets", she explains.

In September, before the UN General Assembly, Joe Biden had assured that "the United States (will) always promote human rights (...) throughout the world", and that "the future would be in the countries that unleash the full potential of their people".

But his "fist bump" diplomacy, which was to start a new start with Riyadh, showed its limits in another area on Wednesday with the announcement that OPEC, led by Saudi Arabia, would lower its oil production.

“Biden sold his principles on human rights in exchange for the Saudi crown prince’s promise to increase oil production,” lambasted the former head of the NGO Human Rights Watch, Kenneth Roth. "So Joe Biden, was it worth it?".