F1: Verstappen on pole in Japan and on his way to the title

A victory and the point for the fastest lap in the race: this is the ideal scenario that would ensure the coronation for the Dutchman. 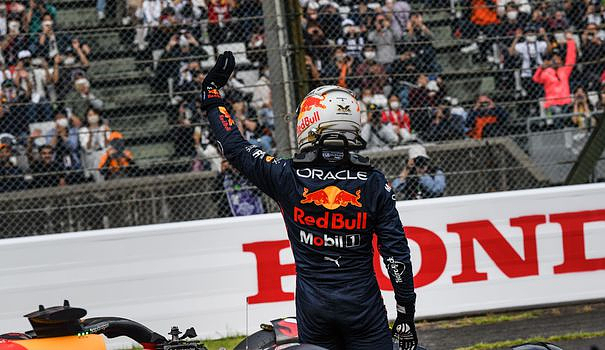 A victory and the point for the fastest lap in the race: this is the ideal scenario that would ensure the coronation for the Dutchman. He beat Charles Leclerc (Ferrari) by just 1/100th of a second and will start ahead of the Monegasque on the front row on Sunday.

"I don't really think (about the title), I take it as it comes," said Verstappen, 25 and a week old, for whom "the important thing is to have a competitive car and that is clearly the case. ".

Other results can also see him crowned, depending on the performance of his two pursuers in the championship: he must take eight points more than Leclerc and six more than his teammate at Red Bull, Sergio Pérez, behind for the moment. of 104 and 106 points respectively.

"Of course, very happy to be on pole, but also super happy to be back here," Verstappen reacted. He signed his first pole at Suzuka, the 5th this season and the 18th of his career.

Japan will be treated to a sold-out race, with 90,000 fans, for its first Grand Prix since 2019, after two seasons of absence due to the pandemic. In total since Friday, 190,000 spectators will have attended the event.

Verstappen almost lost his pole for having hampered Lando Norris (McLaren) in the last part of qualifying (Q3), due to an uncontrolled movement which forced the Briton to leave the track slightly to avoid it.

But the race direction finally decided that it was not worth a penalty, just a reprimand.

"I was driving quite slowly, I wanted to accelerate but my tires were a bit cold, so I had a difficult moment. And of course Lando was trying to pass me at the same time, so he had to avoid me slightly. But luckily nothing happened," Verstappen played down.

According to Norris, it is "pretty clear" that Verstappen tried to prevent him from overtaking him.

"He would have done the same if he had been in my situation, but I wouldn't have made a move towards him if I had been in his situation," he continued for Sky F1, believing that Verstappen "obviously" deserved a penalty.

In front of his public, the Japanese Yuki Tsunoda will start in 13th place.

Sebastian Vettel (Aston Martin), who will retire at the end of the year, took advantage of his qualification in 9th place to greet the public at his favorite circuit: "Arigato gozaimasu (thank you very much in Japanese), this place will miss me," said the German with four world titles between 2010 and 2013, who won four times here.

After the first insignificant rainy free practice on Friday, dominated by Fernando Alonso (Alpine) then George Russell (Mercedes), Verstappen set the record straight on Saturday on a dry track.

"Mad Max" announced it on Friday evening: "Everything starts from scratch in the dry". The teams knew that the qualifying conditions were going to be different, with no rush on the 5.807 km circuit considered one of the most technical on the calendar.

On the only layout that features a figure-8 configuration, one section passing under another, Verstappen took the lead.

But testing on a wet track could be important: forecasts point to a 40% chance of rain from the start of the race, and up to 80% chance at the end of the race.

"The rain could provide opportunities," said Hamilton, who fears the race will "not be the most thrilling if the weather is dry".