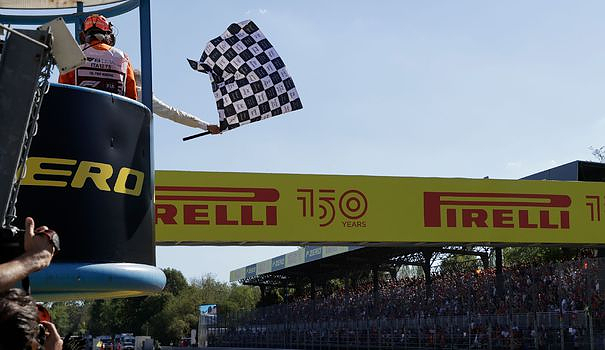 The party could have been total for the Scuderia, which celebrates the 75th anniversary of the legendary car manufacturer and the 100th anniversary of the Monza circuit, but a man has ruined everything. His name: Verstappen, for the 11th time winner out of 16 this season. The 31st victory of his career, at 24, and the first in Italy.

By taking pole position with panache on Saturday, the Monegasque Leclerc had given a smile to his adopted homeland. But he could not make the hearts of the tifosi beat again to the rhythm of the Fratelli d'Italia, as in 2019.

It was again Verstappen who crossed the line in the lead, after a neutralized end of the race under a safety car regime due to the accident of Daniel Ricciardo (McLaren).

"The end of the race was frustrating but that's how it is," reacted Leclerc, thanking in Italian, as always, his tifosi, who rushed to cheer him on the podium.

"We were the fastest, we deserved the victory, of course it's a shame not to have had an end of race but it's a very good day for us", for his part declared Verstappen ... under the boos from the Italian public.

Now 116 points ahead of Leclerc, the 2021 champion is ever closer to a second title as F1 heads to Singapore (October 2) and then Japan (October 9).

Verstappen, sanctioned for a change of internal combustion engine beyond the quota authorized per season, however left with five penalty places, in 7th place.

But, from the start, taking advantage in particular of a Lando Norris (McLaren) in slow motion, the Dutchman gained three places. On the 2nd lap, he easily overtook the other McLaren of Ricciardo, and on the 5th he swallowed at the end of the straight, thanks to his engine, a powerless George Russell (Mercedes).

Only Leclerc remained. And there was no match. The different strategies - one stop for Verstappen, two for Leclerc - prevented the rivals from going wheel to wheel.

Even the drama of the safety car at the end of the race was not followed by a final battle, the management not having restarted the race.

Neither in Italy nor elsewhere can Verstappen be stopped: with six races remaining, he can equal or even exceed the record of 13 races won in a season, held by the Germans Michael Schumacher (2004) and Sebastian Vettel (2013).

For Leclerc, despite two victories at the start of the season (Bahrain, Australia), then one this summer (Austria), title hopes have gradually died out. A little because of pilot errors (Imola, France), a lot because of strategic errors or engine failures.

This time, Ferrari has little to be ashamed of. Maybe another strategy would have paid off. But Ferrari just didn't have Red Bull's pace.

Before the start, a minute of silence in honor of Queen Elizabeth II was observed by the public and the teams, mostly based in the United Kingdom.

In Monza, in addition to the 75th anniversary of Ferrari and the 100 candles of the circuit, the Spaniard Fernando Alonso (Alpine) reached another milestone: with his 350th Grand Prix in F1, he equaled the record held by the Finn Kimi Raikkonen, also a former world champion but now retired.

Alonso, on the other hand, is not ready to hang up. He will beat this record in Singapore except forfeit and will then continue to climb, the Asturian having signed for Aston Martin for several years from 2023.

Finally, the 27-year-old Dutchman Nyck de Vries, replacing Alex Albon on Saturday, operated on for appendicitis, made a great debut in F1 with a 9th place in a poorly performing Williams.

On the French side, only Pierre Gasly (AlphaTauri) finished in the points, in 8th place, Esteban Ocon (Alpine) finishing 11th.