Im „Juffing Hotel</p>But that's not all: Even in the spa area of ​​the four-star plus hotel in the Tyrolean mountains near Kufstein, literature is omnipresent – ​​in the form of bulging bookshelves. 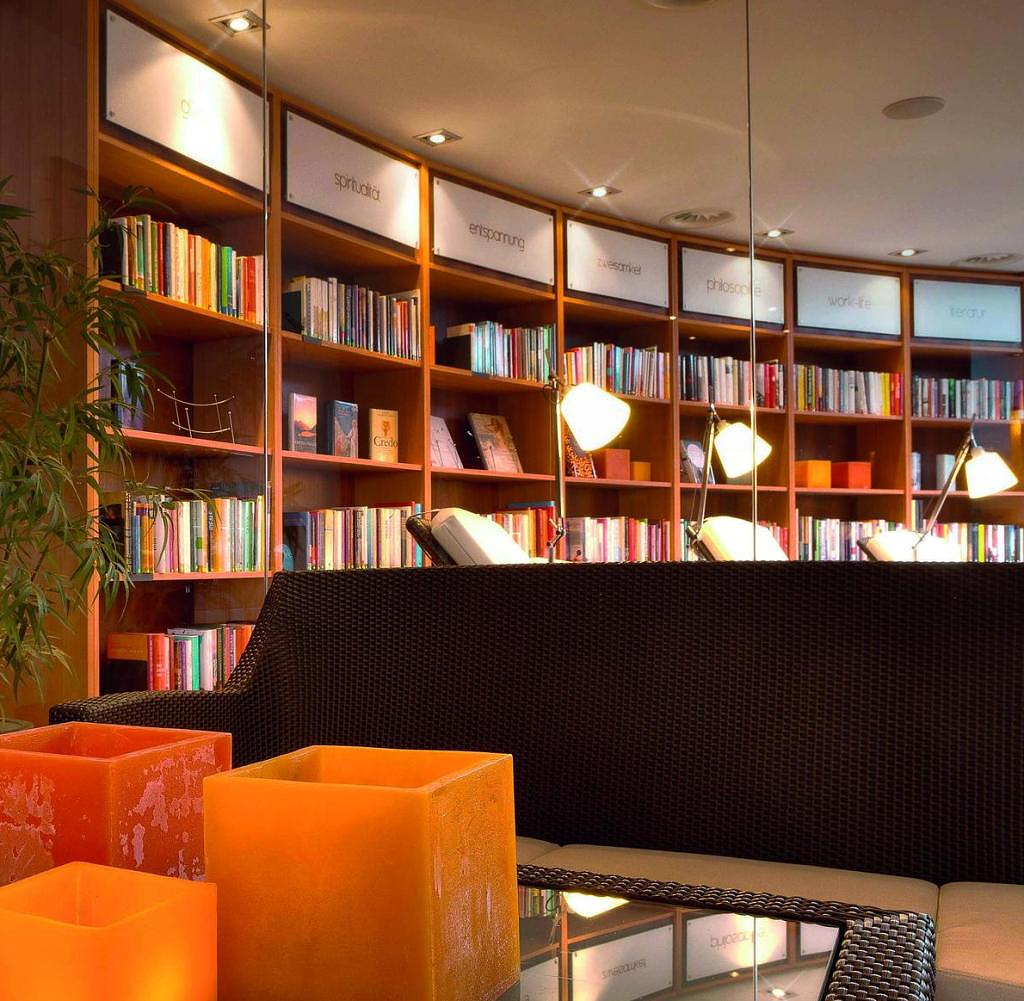 But that's not all: Even in the spa area of ​​the four-star plus hotel in the Tyrolean mountains near Kufstein, literature is omnipresent – ​​in the form of bulging bookshelves. Tablet computers with electronic reading material are even hanging from some loungers.

The "treatment plan" then includes, among other things, the interaction with "exchange scholarship holders". They each live in the hotel for 14 days and give other guests an insight into their literary work. In addition, well-known writers regularly hold readings. On November 15, for example, the well-known author Siljarosa Schletterer announced her arrival.

The "Literature in the Church Tower" series of events is well received, both by the guests and by the hostess. "Listening to a writer without any sense or pressure, drifting mentally into another world - that's good for me, stimulates me, upsets me - and relaxes me," admits Sonja Juffinger-Konzett.

It also offers its guests relaxation options in the form of the "lazybones library" - in other words: iPods with audio books can be borrowed at reception. With the "read to finish" service, visitors are allowed to take a book with them that they cannot finish to the end during their stay and send it back once they have finished reading it. Sonja Juffinger-Konzett's credo is: "Our literary focus isn't something I'm going to sell the house with, but it gives it character!"

Other hotels also distinguish themselves with literature. The response is usually good to very good. This is probably due to the fact that there is enough time on vacation for all kinds of reading pleasures – despite all the digitization and supposed disenchantment with reading. And many guests like to be inspired by a corresponding selection.

The "B2 Boutique Hotel Spa" in Zurich offers an impressive range. Its library, which reaches up to eleven meters high and contains more than 33,000 works, some of which are antiquarian, is located in a former brewery. At the same time, it serves as the hotel's breakfast room - a sensational setting for reading under XXL chandeliers made of green original Hürlimann beer bottles.

Literature hotels are also very popular in Germany. “Schloss Elmau”, for example, enjoys an excellent reputation in the Upper Bavarian mountains. The occasion is that of the philosopher and bestselling author Dr. Johannes Müller created library and the unique bookshop.

He supplies the guests, some of whom have come specially for him, seven days a week, as the self-promotion says, "food for thought". The business became famous through a photo from the G-7 summit in 2015, when Angela Merkel and US President Barack Obama sat there. At the 2022 summit, other motives were in the foreground.

"Best sellers are not necessarily our forte, rather the special book," says Dr. Ingeborg Prager. She is widely appreciated for her recommendations - and for winning author greats like Michael Ondaatje and Ian McEwan for readings in the hotel.

The “Hotel Wedina” in Hamburg has also made a name for itself among literature lovers. Since 1999, the modern house, which actually consists of five houses, has been working closely with the nearby Literature House. Guests can take part in the readings there free of charge. The Literaturhaus also benefits from the cooperation, as almost all the poets who read there are accommodated in the "Wedina", including stars such as Margaret Atwood, Henning Mankell and Martin Walser.

When the lobby is fully renovated (in the course of the year), the series of events "Writers in the Hotel" and the "Reading Breakfast" established in 2015 will probably be resumed. In the latter case, authors from German-speaking countries enrich the morning hours by reading from their works to other breakfasters. Those who prefer to do it themselves will find plenty of reading material in the in-house library.

Reading and relaxing is the motto at Gutshotel Groß Breesen in Mecklenburg-West Pomerania. Inspired by the Welsh book village of Hay-on-Wye, Conny Brock transformed the estate into Germany's first book hotel in 1998 and has now collected around 500,000 books. These are stacked against walls, on shelves and in boxes. Lobby, corridors, barn, cellar, even the restaurant is full of paper works.

Brock laid the foundation for this with libraries and estates that were closed after the reunification. Since then, an exchange system has ensured constant change and permanent growth: if you bring two books, you can choose another one and take it back with you. "But it's not the big names that are important here, but the encounters and discussions," explains Brock, and emphasizes: "We are not a public meeting place, but a small, fine hotel - and the books are only available to our guests .”

‹ ›
Keywords:
HotelsLuxushotelsLesenDeutschlandLänderporträtsÖsterreichSchweizBibliothekenBücherZürichSchloss ElmauB2 Boutique Hotel SpaBayern AlpeHamburgWedinaTiroler BergReise
Your comment has been forwarded to the administrator for approval.×
Warning! Will constitute a criminal offense, illegal, threatening, offensive, insulting and swearing, derogatory, defamatory, vulgar, pornographic, indecent, personality rights, damaging or similar nature in the nature of all kinds of financial content, legal, criminal and administrative responsibility for the content of the sender member / members are belong.
Related News