Exhibition by David Valero, Grand Prix in his honor

The 2022 Spanish Cup's final round, the David Valero Grand Prix was an opportunity for bastetanos and other participants to pay tribute to their bronze Olympic medalist, David Valero. 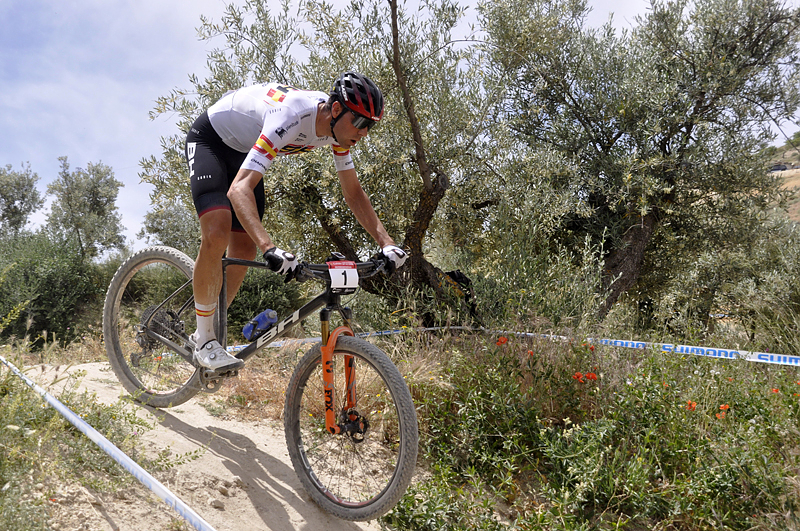 The 2022 Spanish Cup's final round, the David Valero Grand Prix was an opportunity for bastetanos and other participants to pay tribute to their bronze Olympic medalist, David Valero.

The BH Templo Cafes cyclist displayed a great performance, winning the test from beginning to end and completing the final test before the World Cup's second part.

David Valero hadn't raced on the circuit he designed and helped to design for many years. However, there was an area that had been altered.

Valero was already taking advantage of the first meters and, during the first lap, he was followed by David Campos (BH Templo Cafés), who left him in the second turn. This circuit of 4.8 km in length had a first time difference of 25 seconds which was then a minute at finish. David Valero, who was always alone, was gaining the admiration of the public on each meter of the difficult and winding route. The Olympian crossed the finish line in 1h 17:52. He was followed by David Campos (sub 23), who finished the race in 1h 19:29. Third came Ever Alejandro Gomez, a Bolivian cyclist who finished the race with 1h 21:22.

Many national elite cyclists missed the Cofidis Spanish Cup's last test, as the title was already decided in favor of Axel Roudil Cortinat (who did not travel).

Vicent Zaragoza, from Alicante, and Duna Rod from Granada won the junior title in 2022 XCO Spanish Cup. Hugo Franco, from Cadiz, and Aroa Oltero from Pontevedra were crowned champions in cadets.

Manolo Gavilan (the mayor of Baza) and Ana Berrocal (the Territorial Delegate for Education and Sport, Granada), represented the Junta de Andalucia's only ministry that supported the celebrations of the Spanish Cup XCO 2022 - UCI C2 which was included in the international cycling calendar Andalusia, had not hosted a test like this for seven years.

‹ ›
Keywords:
ExhibicionDavidValeroGranPremioLlevaNombre
Your comment has been forwarded to the administrator for approval.×
Warning! Will constitute a criminal offense, illegal, threatening, offensive, insulting and swearing, derogatory, defamatory, vulgar, pornographic, indecent, personality rights, damaging or similar nature in the nature of all kinds of financial content, legal, criminal and administrative responsibility for the content of the sender member / members are belong.
Related News