Eurobasket: the Blues, miraculously, in the quarter-finals

"You have the impression of surviving a match that you should have lost", summed up, relieved, Evan Fournier. 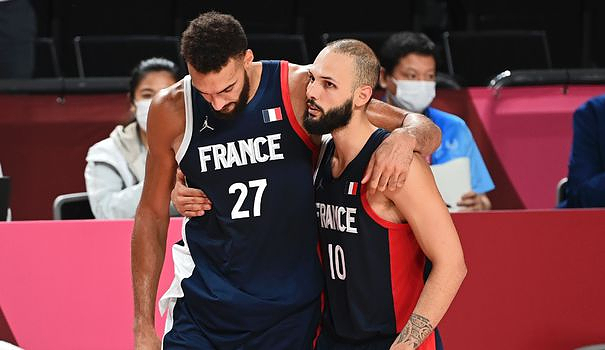 "You have the impression of surviving a match that you should have lost", summed up, relieved, Evan Fournier. "It got us going for extra time."

The place of the Blues in the next round was indeed held by two free throws missed by the Turkish Cedi Osman with twelve seconds on the clock, and a tap in the wake of Rudy Gobert, immense Saturday (20 pts, 17 rebounds), to sneak in overtime (77-77).

"I've been through it before but when you see it again, you always feel like it's the first time," commented Captain Fournier again.

Vincent Collet's men, Olympic vice-champions, will return to the Arena in the German capital on Wednesday, probably against Serbia's Nikola Jokic, unless Italy feat in the round of 16 on Sunday.

A rise in power is recommended... Because the void left by the two great absentees, Nicolas Batum and Nando De Colo, resting this summer, is still not filled in attack, where the Blues as since the start of the Euro multiplied the losses of balls on Saturday (20 before extra time). Like a pass in the stands from Evan Fournier (13 pts) at the start of the last three minutes.

They however counted up to 16 points in advance (31-15), evaporated in a room heated by the "Türkiye" of the Turkish diaspora in Germany.

A new total air pocket in the third quarter made them falter, the 19-0 conceded making them switch from 49-38 to 49-57 and confirming their difficulty in managing weak times.

Above all, the Turks settled the target after a sickly clumsiness at the start of the match (5/19, 26% in the first quarter). Their eyes may still be glued to this unusual time (12:00 p.m.), they ended up converting the loss of balls, already numerous in the first round (6).

A defect to be urgently corrected for the Blues when their two setbacks in the group stage forced them into an obstacle course to go to the end, their repeated objective.

Next Wednesday, the double MVP Nikola Jokic would be only the first of three NBA superstars on the passage of the Blues. Vincent Collet's men can find Luka Doncic's Slovenia in the semi-final, before a final against Giannis Antetokounmpo's Greece. Provided that all these people, starting with the Blues, do not take the front door.

On Saturday, Evan Fournier's band came very close to taking the "Sublime Porte", although Turkey were deprived of their star point guard Shane Larkin through injury.

If they have contained the best opposing player since the start of the tournament, the promising interior of the Houston Rockets Alperen Sengun (8 pts), their fate was only due to the two shots missed by Cedi Osman. A sanction which, however, should never have been taken by arbitration, according to Fournier.

"It makes no sense to call an unsportsmanlike foul on that. Everyone knows we're going to foul. Otherwise, we let them run the clock."