After the finals of the Euro in 2020 and the World Cup-2021, the Norwegians have once again extinguished a dream of a title for the Blues who will return to the Arena Stozice on Sunday (5:45 p. 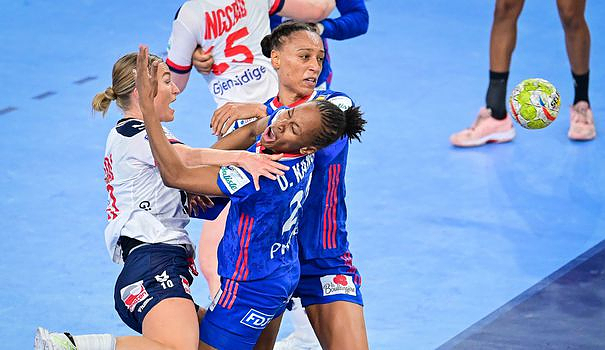 After the finals of the Euro in 2020 and the World Cup-2021, the Norwegians have once again extinguished a dream of a title for the Blues who will return to the Arena Stozice on Sunday (5:45 p.m.) to compete for the bronze medal in Montenegro.

Herning 2020 and Granollers 2021 have their sequel: Ljubljana 2022. Once again creatures from the north have come to haunt Les Bleues this year, without waiting for the final.

The misstep of the European and World Champions on Wednesday against Denmark (31-29) - which they will meet again in the final - precipitated their northern rivals on the road to Estelle Nze Minko's band before the hour. .

And repeated their recurring nightmare whose soundtrack is a clapping performed by a red crowd equipped with bells.

The handball fairy visited the fjords from where she looked at the cradles of the trio of Norwegian backs: Henny Reistad (5 goals), Nora Mork (8 goals) and Stine Oftedal (7 goals), phenomenal on Friday.

Before cracking at the end of the match, the Olympic champions contained their opponent defensively (12-11 at halftime). But they have all along stumbled, like last year in Catalonia, on Silje Solberg (14 saves, 41% of saved shots), like her double save against Coralie Lassource and Grace Zaadi, who deprived them equalizer just before half-time.

If Cléopâtre Darleux (23%), almost impassable since the start of the tournament (42% of shots saved before), lost the duel of goalkeepers on Friday, it is mainly the fault of Stine Oftedal.

The center-half voted best player in the world in 2019 sprayed the Brestoise with low shots. Like the opener (1-0), as a symbol, the first time in the tournament that the Blues were behind.

Spent four seasons by Issy-Paris in the French Championship, Oftedal, close to Les Bleues, with whom she had celebrated the Olympic title in Tokyo on the ground, has become their usual executioner again.

Coincidence or not, this one was absent from their route at the Tokyo Olympics, eliminated in half by the Russians. A beginning of complex is emerging against the Norwegians, undefeated since 2017 against the French and in the hunt for a ninth European title on Sunday to stretch their record.

It is the third time in four tournaments that the tricolors stumble when they cross the band of the stainless Katrine Lunde (42 years old). Even the latter, who could personally win a sixth European championship, was decisive in stopping a penalty from Zaadi allowing the Blues to come back to two lengths (20-17) a quarter of an hour from the end.

Olivier Krumbholz's 500th at the head of Les Bleues will not remain his best memory. There remains one medal to save on Sunday: a bronze to collect to perpetuate their insane series, except for Kumamoto's accident at the 2019 World Cup, the French handball players have never returned empty-handed from a tournament since the 2016 Olympics.