"The mission will start in October for a maximum duration of two months. 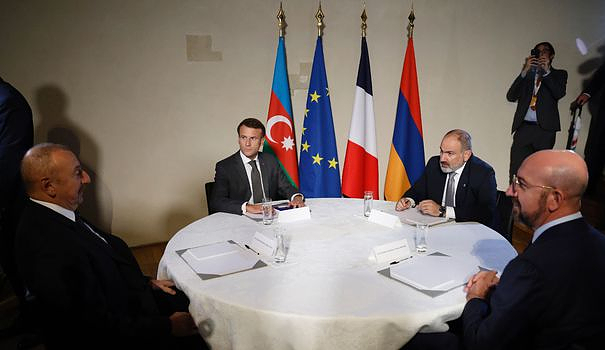 "The mission will start in October for a maximum duration of two months. The objective of this mission is to establish trust and, through its reports, to contribute to the border demarcation commissions," Armenian Prime Minister Nikol Pashinian announced. , Azerbaijani President Ilham Aliyev, French Head of State Emmanuel Macron and European Council President Charles Michel after several hours of talks in Prague.

“Armenia has agreed to facilitate the establishment of (this) mission” and “Azerbaijan has agreed to cooperate with this mission as far as it is concerned”, underline the stakeholders in a joint declaration.

The four leaders met late into the night from Thursday to Friday, on the sidelines of the first summit of the European Political Community.

"For a lasting peace in the Caucasus", tweeted President Macron, looking absorbed and tense, photo of the four leaders in support, gathered around a table in striking chiaroscuro.

“Armenia and Azerbaijan have confirmed their commitment to the United Nations Charter and to the Alma Ata declaration of 1991, by which they mutually recognize their territorial integrity and sovereignty,” the joint declaration underlines.

"They confirmed that it would serve as a basis for the work of the border delimitation commissions and that the next meeting of the commissions would take place in Brussels by the end of October", it is specified.

The Alma Ata agreements (or Almaty in Kazakhstan) recorded the creation of the Commonwealth of Independent States (CIS), which brings together former Soviet republics, including Armenia and Azerbaijan.

In September, at least 286 people were killed in clashes between the two countries, the worst between these two Caucasian neighbors since their 2020 war.

The dispute concerns the fate of Nagorno-Karabakh, a separatist enclave populated by Armenians in Azerbaijan, and the delimitation of the borders between the two countries.

Talks had been initiated in May 2021, under the aegis of Russia, for the delimitation and demarcation of their common borders.

But Russia has since embarked on a military offensive in Ukraine, which limits its room for maneuver elsewhere, and the United States and the European Union have taken on a major role as mediators in the process of normalization between Baku and Yerevan.

Nikol Pashinian and Ilham Aliyev have met three times this year in Brussels, the last time on August 31. On May 23, they pledged to advance discussions on a future peace treaty.

Armenia, an ally of Russia, and Azerbaijan, backed by Turkey, have clashed in two wars over the past three decades for control of Nagorny Karabakh.

The 2020 war claimed the lives of more than 6,500 soldiers and ended after a Russian-brokered ceasefire.

Armenia has ceded territories it has controlled for decades and Moscow has deployed some 2,000 Russian soldiers to watch over this fragile truce.

After the collapse of the Soviet Union in 1991, the separatist Armenians of Nagorny Karabakh unilaterally declared their independence. The ensuing conflict claimed 30,000 lives.