"This is a great first for the EU," commented a European official. 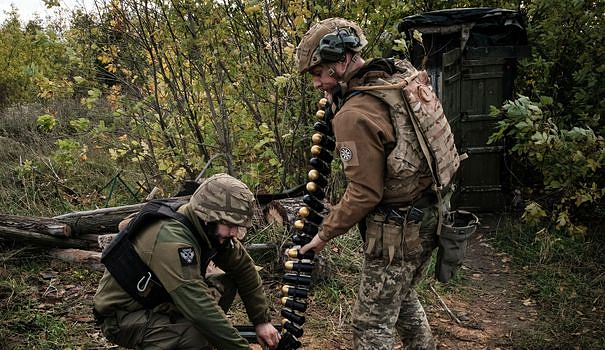 "This is a great first for the EU," commented a European official. "We have never conducted a mission on this scale," he said.

The foreign ministers of the 27 member countries will endorse these two decisions on Monday at a meeting in Luxembourg and the mission will be immediately operational, a diplomatic source said.

Several training courses are in fact underway in various Member States, particularly in Germany and France, where Ukrainian soldiers are trained to use guns, missile launchers and anti-aircraft defense systems supplied by the Europeans.

France will train "up to 2,000 Ukrainian soldiers" on its soil, French Minister for the Armed Forces Sébastien Lecornu announced in a daily newspaper on Saturday.

This is to provide "general training" of combatants, to meet "specific needs reported by the Ukrainians, such as logistics", and to train them "on the equipment provided", explained Mr. Lecornu.

These training courses will be able to benefit from funding allocated by the European Peace Facility (EPF), the fund set up outside the European budget to help Ukraine militarily.

In total, the objective is to provide "basic training" to 12,000 Ukrainian soldiers and "specialized training" to 2,800 others, a European source explained.

Artillery, engineering units, radars: the needs of the staff of the Ukrainian armed forces are multiple.

The European mission will complement the training provided by the British and the Americans.

Poland will serve as a hub for the mission, because "it is the exit door for the Ukrainians and the return door", it was stressed. Germany, for its part, wants to form a Ukrainian brigade.

A budget of 50 to 60 million euros per year is planned for the launch phase of the mission, it was specified in Brussels. It must be confirmed on Monday at the same time as the granting of new financing of 500 million euros from the armaments facility, bringing the effort of the Europeans to 3 billion euros, to which "are added the contributions bilateral, which are much more important".

"A budget for seven years was spent in seven months," said a senior European official.

The Facility's endowment is 5.7 billion and the Europeans will have to get back to the pot. Germany, France, Italy and Spain are the four biggest contributors.

The head of Ukrainian diplomacy Dmytro Kouleba must participate in the meeting by videoconference and Paris must confirm the delivery to Ukraine of six new Caesar guns (in addition to 18 already sent), several 155 mm howitzers, launchers LRU rockets -- the French equivalent of the American HiMARS --, and Crotale surface-to-air defense systems against drones used by the Russians.

Germany and Spain have also announced the supply of air defense systems.

Drones have become "an asset" in the conflict in Ukraine. The Europeans denounce the supply of such weapons to Russia by Iran in violation of United Nations resolutions, which Tehran denies.

He also called for an immediate end to the "violent crackdown" on protests sparked by the death a month ago of a young woman arrested by Iranian morality police.

The EU will sanction Monday the chief of this police and a dozen other leaders considered responsible for this repression. Mr. Amir-Abdollahian denounced this prospect by calling on the EU to adopt "a realistic approach" to these demonstrations.