EU-Balkans summit in Tirana to strengthen ties with Moscow

This meeting in the Albanian capital is the first summit of this type to be held in a Balkan country for more than twenty years. 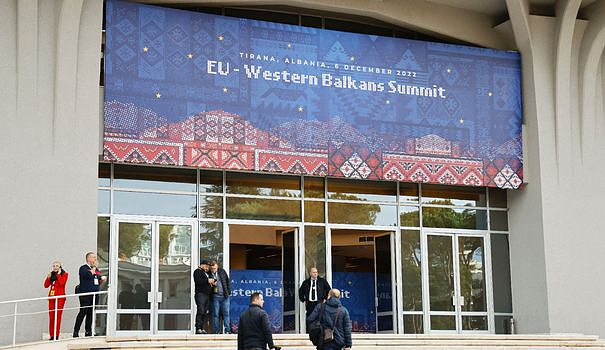 This meeting in the Albanian capital is the first summit of this type to be held in a Balkan country for more than twenty years.

"It's very symbolic (...) and it shows over the last few months a strong evolution in terms of atmosphere, commitment, involvement", commented the President of the European Council Charles Michel on the eve of the meeting.

Also stressing that the enlargement policy had "regained vigor", European Commissioner Oliver Varhelyi had called on Friday in Belgrade to "keep this momentum" and "live up to expectations".

For Lukas Macek, associate researcher at the Jacques Delors Institute, one challenge of the summit will be precisely to "confirm a new stage in the EU-Western Balkans relationship, which was in a form of stagnation and disenchantment on both sides".

These countries, stuck in the antechamber of the EU for years, have often expressed their frustration with a long and demanding integration process, most recently seeing the bloc quickly grant candidate status to Ukraine and Moldova.

But the war in Ukraine has also underlined the importance for the Europeans of stabilizing this fragile region of south-eastern Europe, of countering the influence of Russia there as well as that of China, which has invested in infrastructure. of these countries.

In July, the EU finally opened accession negotiations with North Macedonia and Albania (candidates since 2005 and 2014 respectively). These talks have also been ongoing for several years with Montenegro and Serbia.

In October, the Commission recommended granting candidate status to Bosnia and Herzegovina, a decision that will come to the European Council on December 15-16.

For Kosovo, on the other hand, the obstacles to a candidacy are numerous. This former predominantly Albanian Serbian province proclaimed its independence in 2008, which Belgrade does not recognize. Five EU countries do not recognize it either (Spain, Greece, Cyprus, Romania, Slovakia).

In Tirana, the EU will "reconfirm its full and unequivocal commitment to the prospect of accession of the Western Balkans and call for the acceleration of negotiations", according to a provisional version of the final declaration. But the summit also focuses on concrete cooperation issues.

To help these countries cope with the energy crisis, the EU, which remains by far the leading trading partner of the Western Balkans, is going to confirm a package of one billion euros in subsidies. They must make it possible to attract public and private investment and mobilize a total of at least 2.5 billion euros.

An agreement must also be signed with telecom operators in the region to reduce roaming charges between the EU and the six Balkan countries in 2023, with a view to gradually eliminating them by 2027.

Cooperation in the field of security, and in particular cybersecurity, must also be strengthened.

Another priority is the fight against irregular immigration: the Balkan route is the main migratory route to the EU. The number of arrivals by this route in the first ten months of the year increased by almost 170% compared to the year before, which prompted the Commission to present an action plan on Monday, proposing in particular the deployment of the Frontex agency in these countries to help them control their borders.

The EU urges the Balkan countries to align their visa policy with its own. Serbia has been accused of contributing to an increase in arrivals of Indian, Tunisian, Cuban and Burundian migrants in the EU, as these nationals can arrive at Belgrade airport without a visa and then continue their journey to the Union by land. . Under European pressure, Serbian President Aleksandar Vucic finally announced the end of visa exemptions for Tunisians and Burundians.

But the EU is also asking Belgrade, which maintains close ties with Russia, to align itself with the policy of sanctions decided by the bloc against Moscow in reaction to the war in Ukraine.

Aleksandar Vucic, who until the last moment threatened to boycott the summit, will finally be there.