"Our delegation will be present" in South Africa on Monday, said one of their spokespersons, Kindeya Gebrehiwot, in a message to AFP. 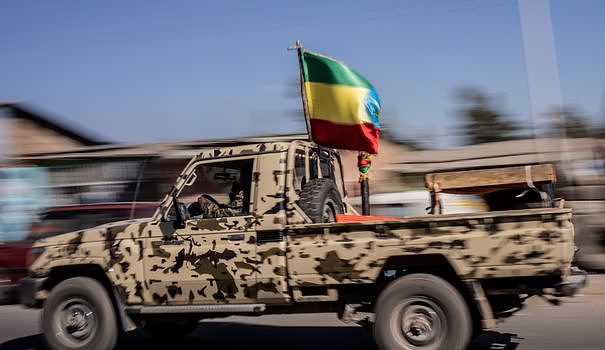 "Our delegation will be present" in South Africa on Monday, said one of their spokespersons, Kindeya Gebrehiwot, in a message to AFP.

The Ethiopian federal government of Prime Minister Abiy Ahmed, whom a deadly war has opposed since November 2020 to the rebel authorities in Tigray, announced Thursday its participation in these talks.

Shortly after, Mr. Abiy said, when inaugurating a school in Addis Ababa, that the war would "end and peace prevail".

"We are not going to keep fighting indefinitely," he said, without however mentioning the next discussions and as the Ethiopian army and its allies have recently stepped up their offensive in Tigray.

On Friday, the AU Peace and Security Council (PSC) said it expected "fruitful results" from these talks scheduled "from October 24, 2022 in South Africa", in a press release published at the end of its first meeting since fighting resumed in northern Ethiopia in late August.

Previous negotiations, organized in early October in South Africa by the AU, had fizzled before they even started.

The resumption of fighting on August 24 in northern Ethiopia put an end to a five-month truce and the meager hopes of peace talks it had raised.

The UN Security Council is due to meet behind closed doors on Friday to discuss the situation in Ethiopia, State Department spokesman Ned Price said in Washington.

These two "meetings demonstrate the great concern of the international community regarding the situation in northern Ethiopia", he added.

The International Crisis Group (ICG) estimated on Friday that "the current phase of the conflict poses a serious risk of increased atrocities" against civilians by Ethiopian and Eritrean troops and called on "regional and Western powers to do more to prevent the catastrophe from continuing".

"So far, the world's response to the war in Tigray has been sluggish, despite the huge number of casualties and the potential ... for regional destabilization," writes ICG.

AU, UN, European Union and Washington in particular are concerned about the recent intensification of fighting in Tigray, taken in a pincer movement by the Ethiopian federal forces, supported in the north by the army of Eritrea - a country which borders the northern border of Tigray - and in the south by troops from neighboring Ethiopian regions.

Ethiopian and Eritrean forces notably seized on Monday, after several days of bombing, Shire, one of the main cities of Tigray populated by around 100,000 inhabitants before the war and which hosted many displaced people.

A humanitarian source who requested anonymity told AFP that intense fighting was taking place on Friday in Selekelka, halfway between Shire and Aksoum, referring to "a push" by Ethiopian and Eritrean forces towards this other major city of the Tigray and an ancient site listed as a World Heritage Site.

In a telephone conversation Wednesday with UN Secretary General Antonio Guterres, US Secretary of State Antony Blinken said he was "deeply concerned" about the "risk of mass atrocities" in northern Ethiopia.

On Monday, Mr. Guterres said the situation in Ethiopia was getting "out of control".

The exact toll of this deadly war, which is largely taking place behind closed doors, with journalists not having access to the region, is unknown.

But it has displaced more than two million people and plunged hundreds of thousands of Ethiopians into near-famine conditions, according to the UN.