Entry of students in one year

In fact, there should be no more cables hanging from the ceiling. 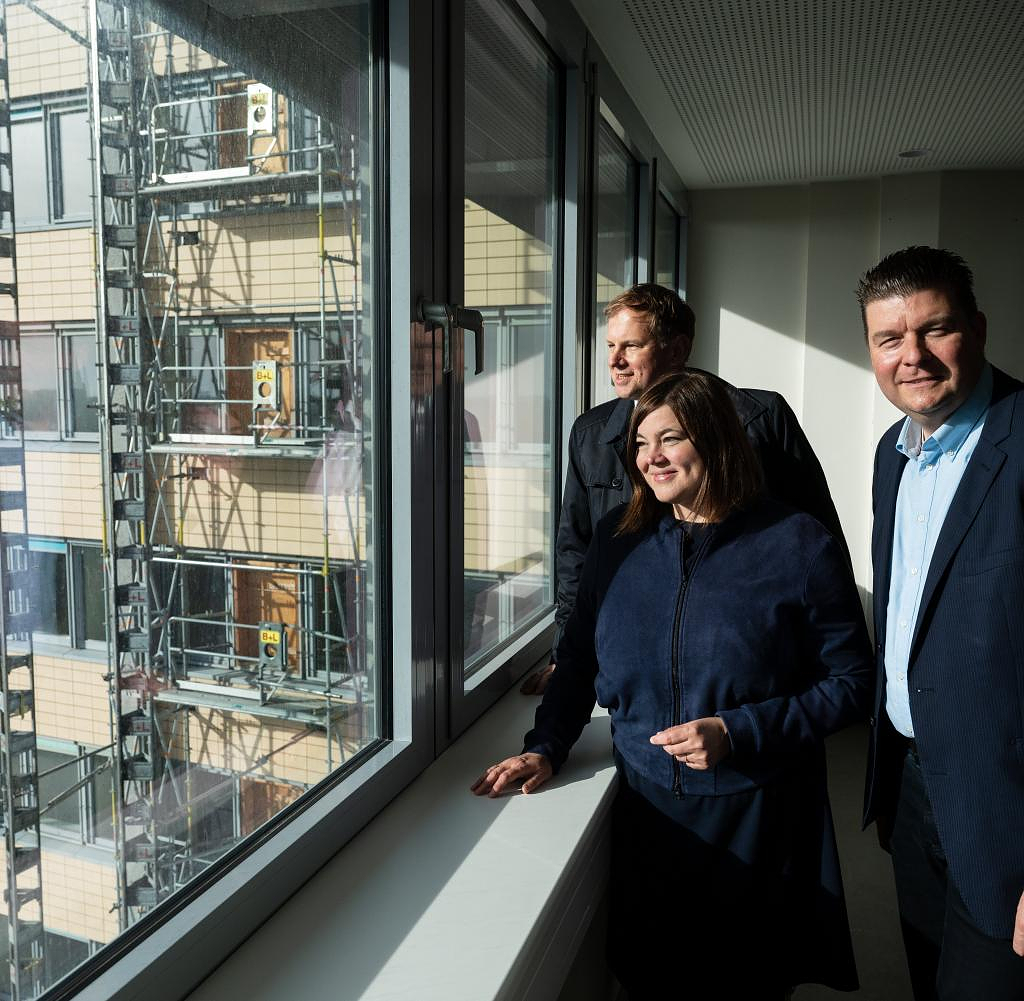 In fact, there should be no more cables hanging from the ceiling. More than one elevator should be usable inside. And in lecture hall D, students should be sitting next to the Thermopylae triptych by Oskar Kokoschka and listening to a lecture on philosophy, German, history or linguistics. But the construction work inside the Philosopher's Tower at the University of Hamburg has been delayed again, which is associated with increased costs. Lecture Hall D is empty, not even the chairs are standing. And the best way to get to the top floors of the tower is by using a freight elevator on the outside of the building.

And so Science Senator Katharina Fegebank (Greens) as the future tenant of the Phil Tower and Finance Senator Andreas Dressel (SPD), to whose authority the client Sprinkenhof belongs, came to the building at Vom-Melle-Park 6 to see why the Construction work more difficult than expected and which parts of the building are already finished. Above all, this is a cube with three floors that was newly built in the inner courtyard, in which the students can work freely in the future and in which the storage rooms of the library are located.

Even on the twelfth floor, where the offices for professors and staff will be located, the building already looks largely finished. Standing there is Sönke Andresen, a partner in the architectural office APB, which took on the general planning for the building, and tells how the tower has driven him and his team to despair.

Suddenly there was less reinforced concrete under the old perforated metal ceilings than expected or deviations in the ceiling heights that nobody had expected. He also had to subsequently secure the floors with steel girders in several places, because otherwise they might not later be able to support the bookshelves of the new central library on floors two to six.

The trigger for the total renovation of the university's tallest building, with 14 floors, were glaring deficiencies in fire protection. Modernizing and improving this caused the biggest problems, said Andresen. It was also the task of the planners to bring the building up to date technically and to make it barrier-free. The new building in the former inner courtyard of the tower also comes from APB. Andresen compared the renovation to restoring an old car. In the end you will see that the work was worth it.

Martin Görge, managing director of the municipal Sprinkenhof, is of the same opinion. Before the decision to refurbish the tower was made in 2017, demolition of the building had also been considered - despite the fact that it is a listed building. "I'm glad we didn't do it back then," says Görge, who still thinks the renovation is the better choice, despite the current project costs of 103 million euros. At that time, Sprinkenhof had estimated the cost of a new building at 113 million euros and the cost of renovation at 85 million euros.

The students moved to City North in the 2017/2018 winter semester. The city concluded a lease until 2020, but secured an option to extend it until 2022. The corona pandemic made the initial plans for students to move back into the building in 2021 unrealistic. In September last year, the withdrawal for the 2022/23 winter semester was still considered feasible. But this year it quickly became apparent that this date would not be kept. Building materials became increasingly difficult to obtain and companies could not keep their promises. "Instead of 15 tilers, the companies only came with three," says Görge.

The new date for the move is September 2023. An annoyance for Fegebank and Dressel, who sent the message to the city council a few weeks ago, but not a big one. Both were happy that the end of the renovation work was in sight.

And since the city will ultimately only be a tenant of the tower, they will hardly be affected by the cost increases. In addition to the construction costs, the financing costs play a particularly important role in the tenant-landlord model. However, due to the past phase of low interest rates, these costs are significantly lower than expected at the start of the project in 2017. And so the rent for the city is unlikely to increase, said Fegebank.

‹ ›
Keywords:
DresselAndreasSprinkenhofWittegenanntVedderJuliaFegebankKatharinaHeekerenHaukeUniversität HamburgTexttospeechAndreas DresselKatharina FegebankOskar KokoschkaAPBGrüneHauke HeekerenPhilosophenturmKarriere
Your comment has been forwarded to the administrator for approval.×
Warning! Will constitute a criminal offense, illegal, threatening, offensive, insulting and swearing, derogatory, defamatory, vulgar, pornographic, indecent, personality rights, damaging or similar nature in the nature of all kinds of financial content, legal, criminal and administrative responsibility for the content of the sender member / members are belong.
Related News