Energy sobriety: details of the government's battle plan "to get through the winter"

The challenge is on. 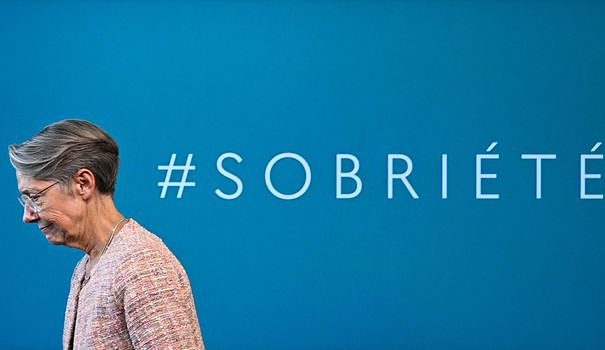 The challenge is on. In two years, France will have to achieve "10% reduction in energy consumption" compared to 2019, the government announced on Thursday, October 6. During a conference bringing together ministers, heads of administration and bosses of major sectors of activity, the Minister for Energy Transition Agnès Pannier-Runacher sounded the starting signal for a "general mobilization" for the economy. energy pointing the finger at "the urgency to act". All sectors and aspects of daily life will be called upon, individuals, companies and administrations, to achieve this objective and avoid gas and electricity shortages this winter. A first march to prepare the French for the much larger savings required by the climate emergency, by the consequences of the war in Ukraine, and by the shutdown of 32 French nuclear reactors. To "spend the winter", the ministers therefore presented for three hours the dozens of measures of the "sobriety plan", based on the voluntary participation of the actors rather than on coercion. Update on the main announcements.

The temperature inside should not exceed 19°C. In apartments, houses, offices or administrations... Everyone is affected by this announcement, which alone will save a considerable amount of energy. The ministers notably encouraged individuals to buy programmable thermostats, specifying that aid of up to 65 euros will be put in place. In the offices of companies and administrations, the temperature may be lowered to 16°C in storage areas or at night, and to 8°C when the building is closed for more than 48 hours (except in nurseries or health establishments) . In gymnasiums, it will be lowered by two degrees, to 14 degrees. Hot water tanks everywhere should be set at 55 degrees, the ministers added.

Telecommuting compensation will be increased by 15% in the public service (to 2.88 euros per day). Businesses are called upon to do the same. But teleworking is only of interest if it makes it possible to close (and therefore stop heating) buildings for several days in a row. The administrations also undertake to cut off the hot water in the sanitary facilities of the buildings, except in the showers. On the industry side, a massive wave of energy diagnostics is expected, as well as a generalization of LED lighting. Battery recharging (vehicles, trolleys) must be staggered to avoid the most tense hours, between 8 a.m. and 1 p.m. and between 6 p.m. and 8 p.m. The retail sector is committed to reducing the light by 30% in the presence of the public, and by 50% the rest of the time. Advertisements and neon signs will be extinguished when shopping centers close, while a decree was published on Thursday to generalize the extinction of store lights throughout the country between 1 a.m. and 6 a.m. (the ban knew until here derogations according to the size of the agglomerations).

The government wants to encourage carpooling between individuals, with the distribution of a check to each new registrant on a carpooling platform, the amount of which is not yet confirmed. From January 2023, employers will also cover the cost of renting electric bikes to private renters. The agents of the administration will also take part in this effort, by limiting their speed in their service cars, to 110 km/h on the motorway and to 100 km/h on the expressway. A reinforcement of the eco-driving training offer is also planned.

Culture and sport will have to participate in the collective effort. In the 4000 public swimming pools on French territory, the temperature will be reduced by 1 degree, and the thalassos are called upon to do the same. That of saunas, hammams and jacuzzis will also be reduced, as well as their opening hours. On collective sports grounds, the lighting time before or after matches will be reduced by 50% for daytime competitions and by 30% in the evening. The temperature of the gymnasiums will be put in frost protection mode in the event of voltage on the network. Even the speed of the chairlifts in the ski resorts will be adapted to attendance, or even shut down when unnecessary. In Paris, major heritage sites such as the Louvre pyramid, the Grandes Halles de la Villette or the Palace of Versailles will turn off their lights earlier. Heating work will also be carried out at the Louvre and in schools of architecture, to reduce their energy expenditure by 10% from 2023. Cinemas will have to reduce their lighting, use their signs less and also lower the heating.

To encourage households to undertake the energy renovation of their homes, MaPrimeRenov aid will reach 2.6 billion euros in 2023, against 2 billion this year. The aid can go up to 9,000 euros for a heat pump and up to 15,500 euros for an efficient biomass boiler in a main dwelling, depending on income. Assistance will also be added to initiate the insulation of water and heating pipes to prevent heat loss. The State, which wants to be "exemplary" in its own house, also provides an envelope of 150 million additional euros "so that no boiler renovation or thermostat installation is blocked" in its building (194 million m2 ), said Minister of Public Service Stanislas Guerini. These renovations will begin in October 2022.

To turn this “chosen” sobriety plan into action, the state wishes to stay away from “punitive ecology”. "If the whole nation manages to meet this objective, which is purely voluntary - you don't need a decree of law, complicated things -, if we all mobilize to meet it, in the worst scenarios we spend the winter" , declared the President of the Republic on the morning of October 6, in front of an audience of entrepreneurs.

“There will be no temperature police,” Agnès Pannier-Runacher also promised the French, introducing government announcements. She nevertheless recalled, at the microphone of RTL earlier in the morning, that "companies, the State and local communities were making commitments".