This 40-year-old brood is part of a third of the 400 French producers who had to renegotiate their annual contracts with suppliers before October 31, at prices that jeopardize their activity. 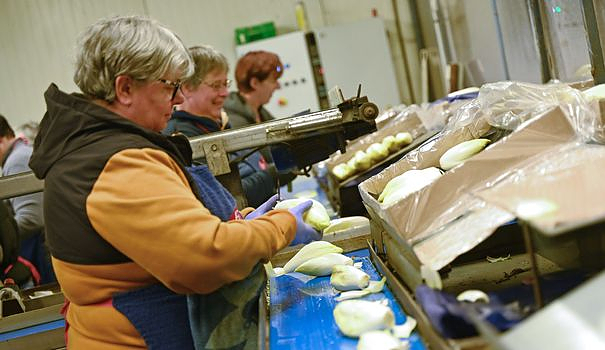 This 40-year-old brood is part of a third of the 400 French producers who had to renegotiate their annual contracts with suppliers before October 31, at prices that jeopardize their activity.

"If it reaches the upper limit, 30% of our turnover, the company is dead," he warns. "I wanted my son to take over, now I don't want to do that to him."

Production is particularly energy-intensive: planted in the spring, the endive roots, the uprooting of which is nearing completion, are then stored for up to several months in huge refrigerated sheds before being placed in cultivation in "rooms growth", heated for 21 days.

"For the time being, this third of producers is at risk of bankruptcy in the very short term. But in a year, at this rate and with these prices, it is the rest of the activity that will sink", warns Stéphane Jacquet , director of the Association of endive producers in France (Apef).

“In the surroundings, there is sometimes only chicory to give people work. Some of my employees have been working here for thirty years, as many families today on borrowed time,” says Mr. Persyn.

In the Hauts-de-France region, which concentrates 95% of production, "we have lost the coal, let's not lose the chicory" (local name for endive), pleads another producer, Daniel Bouquillon, whose he operation at Vélu in Pas-de-Calais is in its fourth generation.

Producers are asking the State for a tariff shield, without which "the proposed tariffs are untenable", insists Stéphane Jacquet.

The representatives of the sector were certainly "heard" by the Minister of Agriculture Marc Fesneau in September, but the response, even after the new measures announced by the government, is not up to the task, he judges. .

The challenge for the executive is to know "if he wants to save the French endive", he insists. "There are people who wonder if the roots should be pulled out to put them in a cold room", or if the game is no longer worth the candle.

The LR boss of Hauts-de-France, Xavier Bertrand, also gave voice, alerting the Ministry of Ecological Transition in mid-October "to the threats of bankruptcy in number" which threaten the sector.

"Betting on competition from suppliers will not be enough to obtain a price" allowing producers "to survive this winter", he pointed out in particular in a letter.

Especially since faced with "the Himalayas of energy increases" - in the words of the Minister of Agriculture during a recent visit to Marne, which was devoted to the difficulties of the potato sector - the sector is starting breathless.

Production, affected by the drought, will be lower this year, according to producers. And the selling price per kilo has already increased for a year, around 4 euros, against 2.50 euros previously, in particular due to the increase in transport costs.

Enough to fuel fears of consumer disaffection, also fueled by the summer climate this fall.

The endiviers must also anticipate the application of the Agec law, at the end of 2024, which will sign the end of transparent and breathable plastic bags. "We have to find a solution, for the moment we don't have it," sighs Stéphane Jacquet.