The illegal trade in endangered animal and plant species represents an annual turnover of around 15 billion dollars for criminal networks, according to the environmental defense NGO World Wild Fund (WWF). 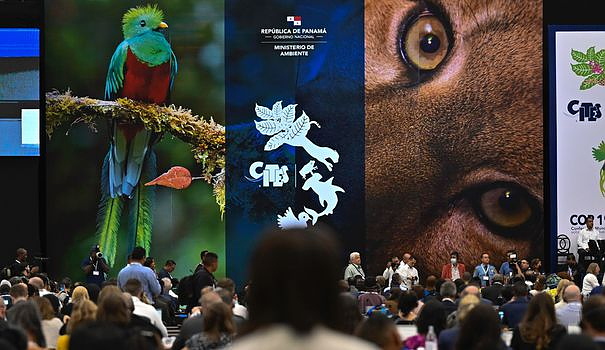 The illegal trade in endangered animal and plant species represents an annual turnover of around 15 billion dollars for criminal networks, according to the environmental defense NGO World Wild Fund (WWF).

The Secretary General of CITES, Ivonne Higuero, called on Monday to "bring to justice" the criminal gangs which are dedicated to this traffic.

"Despite considerable efforts, wildlife crime is still a serious challenge and we must address it as a top priority," Higuero said.

Delegates from the 183 States and the European Union, parties to the Convention, are attending CITES COP19 in Panama until November 25 alongside hundreds of wildlife conservation experts.

They will have to examine 52 proposals aimed at modifying the levels of protection set by the Convention.

The revision of the rules for trade in shark fins, reptiles, turtles and other wild species threatened with extinction or sources of health risks in the Covid era will be on the menu of the meeting.

It must also take stock of the fight against fraud and vote on new resolutions, in particular on the risks of zoonosis (disease transmitted from animals to humans) linked to trafficking, a subject that has become major with the pandemic of Covid-19.

Organized every two or three years, the summit is taking place this year in the shadows and under the influence of two other UN conferences, which are also crucial for the future of living beings on the planet: COP27 on climate, underway in Egypt, and COP15 on safeguarding biodiversity, in December in Montreal.

“Over the next two weeks, CITES parties will discuss a wide range of critical issues and make important decisions for the conservation and regulation of international trade in endangered species,” explained the Secretary General of the Convention.

In 2019 in Geneva, CITES strengthened the protection of giraffes, almost prohibited the purchase of elephants by zoos, maintained the ban on southern Africa selling its ivory stocks, and listed 18 sharks in its Appendix. II, those of species whose trade is strictly limited.

This year, requiem sharks, hammerhead sharks and guitarfish rays should play the leading roles, with a noteworthy proposal to enter Appendix II in turn.

"It would be a historic moment, if these three proposals are voted on: we would go from controlling around 25% of the shark fin trade to more than 90%," Ilaria Di Silvestre, head of fisheries, told AFP. European campaigns for the International Fund for Animal Welfare (IFAW).

"We are in the midst of a very large extinction crisis for sharks", the "second most threatened group of vertebrates on the planet", abounded Luke Warwick, of the Wildlife Conservation Society.

“The fins can reach 1,000 dollars per kilogram on the markets of East Asia”, in particular to make very famous soups, recalls this specialist. A declining but still lucrative international trade, of which Hong Kong is the hub.

This great summit of wildlife specialists is also the first to be held since the appearance of the SARS-CoV-2 virus, which could well be of animal origin.

The subject, for the first time put on the agenda, should generate intense discussions, a prelude to the debates which will continue on this subject at COP15 on biodiversity.