At the end of the morning, the outgoing head of government arrived at Balmoral Castle, the summer residence of Elizabeth II, to officially present his resignation. 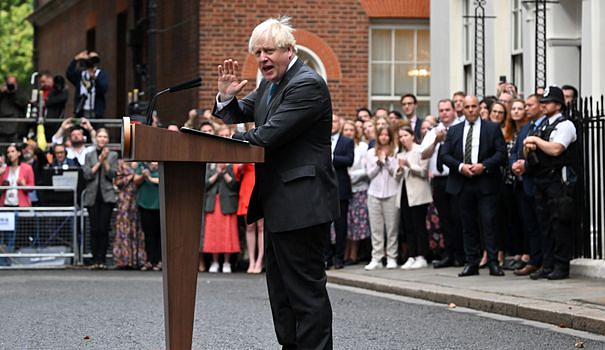 At the end of the morning, the outgoing head of government arrived at Balmoral Castle, the summer residence of Elizabeth II, to officially present his resignation.

The 96-year-old sovereign will receive Liz Truss a few moments later to ask her to form a government, in a particularly difficult period for the United Kingdom, faced with a historic economic and social crisis. She will become the Queen's 15th Prime Minister.

The handover is taking place at Balmoral, not Buckingham Palace in London as is traditional, due to the Queen's mobility issues.

"It's over, friends": In a brief speech outside Downing Street in the early hours of the morning, the outgoing leader praised his own record in front of a crowd of supporters and aides. He compared himself to a "rocket having accomplished its mission" and re-entering the atmosphere. "I will offer this government my strongest support," he said.

Exit the Brexit hero: after three years and 44 days, barely more than Theresa May, whom he replaced in 2019, Boris Johnson left what he called "the best job in the world", after a series of scandals having triggered dozens of resignations in his close entourage at the beginning of July.

- Governing as a "conservative" -

Elected by 57% of some 142,000 voting members of the Conservative Party, against 43% for his rival Rishi Sunak, the former finance minister, Liz Truss, 47, until now foreign minister, must return to London for his address the British in the afternoon.

She promised on Monday to govern "like a Conservative", to put in place "a bold plan to cut taxes and grow our economy" and to beat Labor in the legislative elections scheduled for early 2025.

Under pressure to help millions of Britons facing skyrocketing energy bills, she said she wanted to tackle "the energy crisis by (dealing) with people's energy bills, but also by (dealing with) long-term energy supply difficulties".

Third female Prime Minister after Margaret Thatcher (1979-1990) and Theresa May (2016-2019), the announcement of her government on Tuesday will be a first test for Mrs. Truss, who campaigned very far on the right.

Its finance minister should be Kwasi Kwarteng, 47, hitherto energy secretary, a supporter like Ms. Truss of a more modest state and a more deregulated economy.

Suella Braverman, 42, legal adviser to the government and initially candidate for the post of Prime Minister, is approached at the Ministry of the Interior. Very on the right, she will inherit the file of the thousands of illegal migrants arriving on the British coasts, that the one who preceded her wanted to send to Rwanda.

James Cleverly, 53, Minister of Education after having been Secretary of State for European Affairs, should move to Foreign Affairs, and Ben Wallace would remain at the Ministry of Defence.

Mr. Kwarteng is of Ghanaian origin, Ms. Braverman of Indian origin, and Mr. Cleverly's mother was from Sierra Leone, a diversity never before seen in these key positions.

First announcements to try to stem the economic crisis are expected probably Thursday. After opposing it for most of her campaign, Liz Truss could announce an energy price freeze, with still unclear outlines, to help households and businesses, according to British media.

Ms. Truss, who advocates controversial tax cuts to boost growth and a tighter government, will have a lot to do to bring together a divided Conservative party, in power for 12 years.

Many MPs preferred Rishi Sunak, who was more nuanced and considered better able to manage the crisis. Calls for unity have multiplied, led by Boris Johnson who asked the Tories to "support it 100%".

When announcing her victory, Ms Truss paid tribute to her 'friend'. "Boris, you got Brexit done, you crushed Jeremy Corbyn (former Labor leader), you deployed the (anti-Covid) vaccine and you stood up" to Russian President Vladimir Putin after the invasion of Ukraine, she listed.

After leaving Downing Street, Boris Johnson remains an MP. He said nothing about his future intentions.