End of life: the government in search of a peaceful dialogue with caregivers

"Is this debate legitimate for you or is it superfluous?" Asked caregivers Olivier Véran, government spokesperson and Minister Delegate in charge of Democratic Renewal, during this visit Thursday with Agnès. 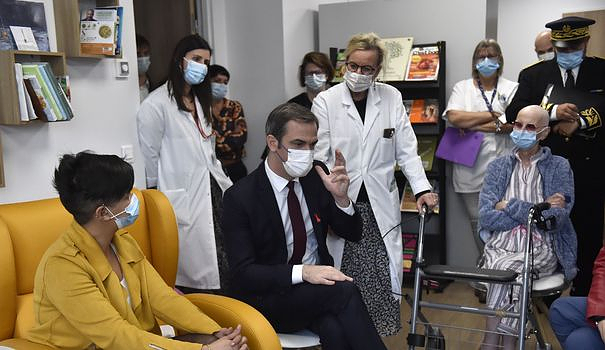 In front of them, a dozen members of the teams of the palliative center of the private hospital of Grand Narbonne where Claire Fourcade, president of the French Society of palliative care, exercises, were able to present their thoughts and reluctance.

"Asking questions is good (...) but the question of euthanasia is not a subject for us", assured Sarah Halioui. "Patients who tell us: doctor, I can't take it anymore, I want it to stop, it's our daily life. But we have answers to give them, and that's not it," says this doctor from the department. palliative.

Like her, several members of the dozen caregivers highlighted "the wide range of solutions" likely to be offered to relieve physical and psychological suffering, and accompany people with incurable diseases towards death.

- Difficult role of the caregiver -

"Once you have aids in place, pain relief, anxiety relief, someone to wash them, change them, and help their loved ones, patients no longer ask to die. “, thus abounded Jean Baptiste Humbert, general practitioner, saying he was “revolted” at the idea “of imposing this choice on the patient one day”.

"But is it really the choice of any patient to be accompanied to the end?, retorted the minister. Where does benevolence stop and where does paternalism begin?"

In this delicate debate, other doctors have shared their fear of being entrusted with this mission of active assistance in dying by a modification of the legislation.

"It scares me that it could pass," said Sophie Audry, general practitioner working in the service's mobile team. "As a doctor, I don't want this to be considered an option. I don't know how to imagine care in this context," she explained.

Especially since the wishes of patients can evolve and be contradictory: "The question of euthanasia engages irreversibility (...) it would be going into something binary, against the ambivalence of the humanity", underlined Marie Françoise Chalamet, psychologist.

- Do not oppose aid to palliative -

However, all agreed that there are situations in which people cannot, or do not wish, to be relieved or wish to take charge of their end of life. "These are situations that make the exceptional, and not the rule," argued Mr. Véran, saying he understood the "emotion" of caregivers.

Balance between relieving someone by telling him that he will have a choice and seeing a potential "guilt of the patient who wants to live, saying to himself I am still living, I am a burden for my loved ones, when I could die (.. .) I am afraid that there is no longer any alternative for them and that moral pressure will be imposed on them", warns Jean-Baptiste Humbert, general practitioner.

Faced with these fears, the government spokesperson assured that it would be necessary "to put in place all the provisions likely to reassure professionals".

Agnès Firmin le Bodo, who visited several palliative care services, highlighted "very different" feelings depending on the place, and insisted on the need "to have calm debates and not to oppose palliative care and active assistance in dying".

"We will have to move forward on palliative care," she said, recalling that many departments remain without such care units.

In parallel with the citizens' convention, these ministers are leading two working groups responsible for reflecting on the question, one made up of health professionals, including Claire Fourcade, the other of parliamentarians.