Like the day before, 4 out of 10 TGVs and Intercités were in circulation on Sunday, an SNCF spokesperson confirmed to AFP. 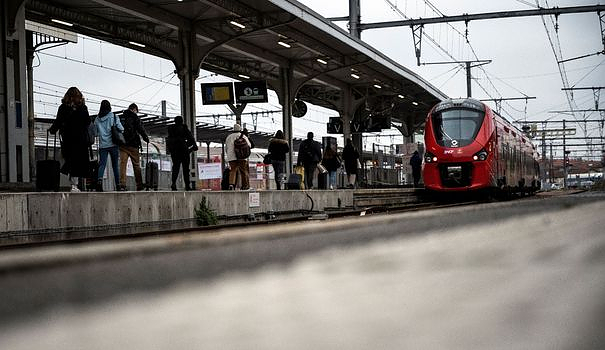 Like the day before, 4 out of 10 TGVs and Intercités were in circulation on Sunday, an SNCF spokesperson confirmed to AFP.

At the Roissy-Charles de Gaulle airport station, the tracks dedicated to TGVs were deserted at the start of the day. The first train was announced for 1:36 p.m., followed by four others in the afternoon.

Surrounded by his three suitcases, Marc Kufess expresses his annoyance: he arrived at 9:30 a.m. from Togo, he only discovered on landing the existence of the strike, and the cancellation of his 11:24 a.m. train for Mulhouse.

A few steps away, Wa Ismaël, reception agent, slaloms between travelers who, for lack of a train, head for the terminals to buy an RER ticket and go to Paris. "It turns everything upside down (...) but we try to do the best," explains the agent.

The management of the SNCF announced Friday that "new meetings" would take place next week with the trade unions and the controllers - officially called captains -, who are demanding in particular better recognition.

The Unsa-Ferroviaire, SUD-Rail, CFDT-Cheminots and FO-Cheminots unions supported the movement, and filed a strike notice for the Christmas and New Year weekends, in order to put pressure on the SNCF.

"We will do our best to ensure that there is no strike at Christmas", however promised Nicolas Limon, one of the founders of the National Collective ASCT (CNA), launched in September on Facebook outside of any union framework. and which now has nearly 3,000 members.

He told AFP on Friday that "more than 80%" of controllers were on strike for the weekend, with a gradual recovery planned for Monday.

At Lille Flandres station, a few rare people were also waiting on Sunday under the screens, which displayed only a handful of TGVs announced.

Anne Gravereaux and her husband have just arrived from Cannes to see their 93-year-old godfather in nursing home. "We looked at all the options: rent a car, come by carpool...". They finally found this train, after a first stop the day before in Paris: "a real hassle!", She says.

Faced with fears that this movement will disrupt the end-of-year celebrations, the Minister Delegate for Transport, Clément Beaune, called on Saturday for "collective responsibility". "Let's work in the next few days to avoid this (...) I will do everything at my level", he assured.

The almost 10,000 train supervisors of the SNCF, of which nearly 3,000 work on the TGV and Intercités, have an essential function in terms of traffic and passenger safety. Without them, trains cannot run.

Beyond salary issues, the controllers feel "mistreated", and demand better consideration as well as an improvement in their working conditions, explained Saturday on RMC Fabien Villedieu, SUD Rail union representative.

"It's a strike that we didn't see coming, neither us nor the unions," SNCF CEO Jean-Pierre Farandou admitted Thursday during a conference organized by the magazine Challenges.

After this weekend of "temperature taking", SUD Rail hopes that concrete proposals will be made during negotiations next week, saying "believe in social dialogue", especially as Christmas approaches.

This mobilization also occurs before the start of the mandatory annual negotiations, which must begin on Wednesday at the level of the SNCF group. The CGT, SUD-Rail and CFDT called for a "unitary strike" that day.