Emmanuel Macron caught up with the McKinsey "plaster"

The National Financial Prosecutor's Office (PNF) announced on Thursday that it had entrusted investigating judges, at the end of October, with two investigations into the intervention of consulting firms in the 2017 and 2022 election campaigns. 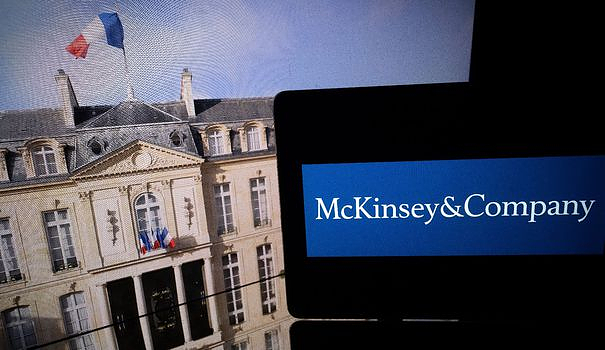 The National Financial Prosecutor's Office (PNF) announced on Thursday that it had entrusted investigating judges, at the end of October, with two investigations into the intervention of consulting firms in the 2017 and 2022 election campaigns. One relates to suspicions of " non-compliant keeping of campaign accounts and reduction of accounting elements in a campaign account", the other targets "heads of favoritism and concealment of favouritism".

Clearly, justice seeks to know if consulting firms would not have unduly participated in the financing of the campaigns of the candidate Macron, before benefiting in return from juicy public contracts.

The Head of State is protected by his criminal immunity, provided for in Article 67 of the Constitution.

And his name does not appear in the very technical press release from the PNF on this point, but it is indeed the affair of the spring which resurfaces. Especially since the PNF reacted to the revelations of the Parisian, who had just reported on these investigations for illegal financing of his campaign.

For the moment, the Élysée, which "learned about the communication from the prosecution", has chosen to turn its back. "It is up to the judiciary to conduct these investigations independently," was limited to reacting the presidency Thursday evening.

Traveling to Dijon on Friday for the International Day of Violence against Women, will the Head of State say more?

It was in the city of Côte-d'Or, already, that the president-candidate had tried to evacuate the first suspicions, at the end of March, sweeping away the "nonsense" relayed, according to him, by his opponents.

"When you want to go very quickly and very hard on a policy, you sometimes have to use service providers outside the state," he insisted.

It was a question of justifying the intensive recourse by the executive to these private firms, pinned in a senatorial report which had had the effect of a small bomb during the campaign. The opposition had immediately called for an investigation into the possible favoritism from which the powerful American company McKinsey would have benefited from the Macronist majority.

"We have the impression that there are tricks, it's false. If there is evidence of manipulation, let it go to the criminal", was also annoyed Emmanuel Macron.

That's done. The Élysée Palace did not fail to note that the two judicial inquiries were opened "following in particular complaints from elected officials and associations".

"This case passes for the moment completely above the French, obsessed with economic, energy and social issues", noted Frédéric Dabi, director of the Ifop institute. "It remains to be seen whether it can become a slow poison for Macronie if the judicial developments multiply".

The presidential camp reacted little for the moment. "Let's stop thinking, because there is an opening of an investigation, that it is infamous", noted Friday on Europe 1 the interim president of the Renaissance group in the Assembly Sylvain Maillard, calling for justice to be left " investigate calmly".

The “McKinseyGate” was erected by the opposition during the campaign as a symbol of an unhealthy connivance with the business community.

The president of the National Rally, Jordan Bardella, did not fail on Friday to accuse Emmanuel Macron of having "entrusted France to liquidators". The consulting firms in question "do not work in the interest of the French nation and the French people", he launched, regretting a policy of "returning the elevator".

During the presidential campaign, the opponents of the Head of State had already constantly called him to account, denouncing a "total drift", a benevolence towards "lobbies" and "tax evasion " assumed by some cabinets, and even a "McKinsey Republic".

Macronie found itself on the defensive. "The oppositions have succeeded in making it a sticking plaster for us", then an official of the majority was alarmed.

The case did not ultimately prevent the re-election in April of the outgoing president.

But the results of the June legislative elections were well below the hopes of his camp, which found itself deprived of an absolute majority and grappling with exhilarated opposition.