Melilla was demolished by the Civil Guard. 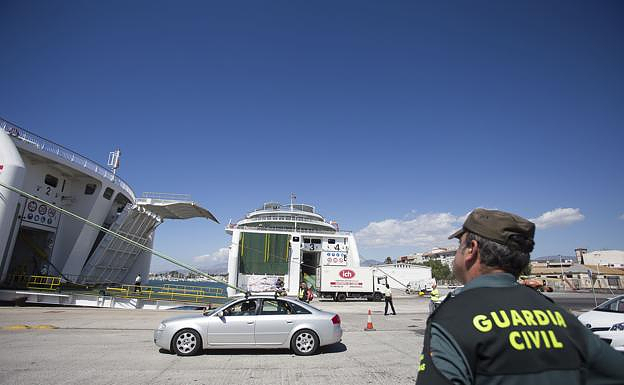 Melilla was demolished by the Civil Guard. It was a criminal organization that engaged in drug trafficking between the town of Melilla and the peninsula. They had acquired vehicles in the Netherlands and transported the drugs to Spain via the shipping lines to Motril, Almeria, Malaga. The intervention led to the arrest of four persons and the seizing of 104.3 kilograms hashish.

According to a spokesperson for the Command, the investigation began in May 2021. The investigations were triggered by the Organic Unit of the Judicial Police, (UOPJ) which discovered the existence of an organized group that was tasked with transporting narcotics from Melilla to the Peninsula using the "double funds" of tourist-type vehicles.

It has stated that a Mercedes Benz GLK car was inspected in Melilla. The vehicle had a sophisticated double bottom. They found and seized more then 104 kilograms of hashish and proceeded to the arrest of the two occupants. .

According to a police spokesperson, the lines of investigation of UOPJ confirmed that criminal elements "acquired vehicles in the Netherlands and transferred them into the Autonomous City of Melilla, where they loaded the narcotics substances."

The "criminal group" leader, who had the responsibility of supervising and coordinating the criminal acts, "called a third person in the Netherlands to request the vehicle he needed and the location of the double funds."

According to the source, after these procedures were completed, the leader went to Spain and captured "straw men", individuals with vulnerable economic needs and who then acted according his instructions.

The "chauffeur" would be one of them, who was led by another part of the organization. The person would move the car to Melilla so that the organization could take the drugs and transport them in cargo using the double funds.

It also indicated that another straw man, who was used by the organization was a mechanic/tinker. His functions included introducing and extracting narcotic substances into the vehicle as well as conditioning it to avoid detection by police in any of the various checks that could be submitted>>.

After the vehicle had been loaded with the drug, and the plot leader ordered, the "driver", embarked on the maritime lines to reach the peninsular ports of Malaga, Almeria, and Motril (Granada).

The spokesperson stated that the leader of Spanish nationality and the mechanic/sheet metal worker of Moroccan nationality, both residents in Melilla, "meticulously supervised all movements of members of the organization and scrupulously controlled all phases regarding the purchase, recruitment, and subsequent transfer, as well as the transport of both drugs and people. Leaving no detail to chance, the vehicle carrying the narcotics to its final destination."

The Civil Guard successfully dismantled this organization with four arrests and 104.3 kgs of hashish. Five mobile phones were also confiscated.

‹ ›
Keywords:
DesmanteladaPasabaDrogaMelillaTravesFerriAlmeria
Your comment has been forwarded to the administrator for approval.×
Warning! Will constitute a criminal offense, illegal, threatening, offensive, insulting and swearing, derogatory, defamatory, vulgar, pornographic, indecent, personality rights, damaging or similar nature in the nature of all kinds of financial content, legal, criminal and administrative responsibility for the content of the sender member / members are belong.
Related News