Elena Garcia Armada was awarded the European Inventor Award 2022 in recognition of her pioneering pediatric exoskeleton.

Elena Garcia Armada is an engineer at Center for Automation and Robotics and a researcher at Higher Council for Scientific Research. 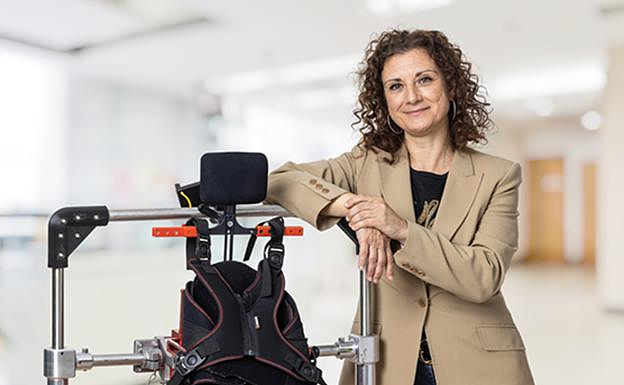 Elena Garcia Armada is an engineer at Center for Automation and Robotics and a researcher at Higher Council for Scientific Research. She had been studying the exoskeleton problem for several years but it wasn't until she met Daniela who was paralysed after a traffic accident that she got the idea to create a pediatric exoskeleton. His invention, which allows wheelchair-bound children to walk during rehabilitation sessions, was awarded the 2022 European Inventor Award by the European Patent Office (EPO).

After receiving the highest number votes from the public in research among the 13 finalists, the scientist receives one the most important international awards for innovation. Antonio Campinos (President of the EPO) said that Elena Garcia Armada's public vote recognizes her determination, ingenuity, and contribution. He said, "Her invention allows children to walk during rehabilitation sessions. This gives hope to many who have been waiting to find new treatment options."

Margarita Salas was the last Spanish woman to be awarded this award. She was honored for her pioneering work in genetics/molecular biology. Garcia Armada spoke about her acceptance speech. This award is a source for pride for me, as well as for Spain, since the pediatric exoskeleton is a scientific achievement resulting from the transfer knowledge from our country. This recognition is made even more special by Margarita Salas, my admirer.

While exoskeletons for adults have been around since 1960, there had never been one designed for children. Elena Garcia Armada started studying the problem in 2009 and developed one. Garcia spoke about his invention in an interview with CSIC. Garcia stated that he realized the problem when he looked at the numbers and saw that 17 million families faced a grim outlook.

He conducted his first successful test with Daniela in 2013. The images of Daniela walking became viral. Garcia Armada received a flood of requests from families all around the globe to help them. This was the moment she established Marsi Bionics, and began industrializing prototypes and conducting clinical trials. She applied for her first patent in 2013, and one year later she applied again.

Elena Garcia-Armada developed the pediatric exoskeleton for children of the CAR-CSIC-UPM. /csic

This was particularly important because young wheelchair users could be at high risk for spinal deformities that can eventually shorten their lives. However, the challenge was not limited to reducing adult exoskeletons in order to make them smaller. Because children with paralysis often have difficulty walking due to neurological conditions, and complex symptoms in terms joint movements, the exoskeleton had to be adaptable and be able to adjust to each patient's needs.

Garcia Armada created a titanium suit that could be adjusted using a battery and small motors. These motors can also connect to software, sensors and machinery. The resultant mechanical joints are intelligent and adapt to the child's movements as they recover. This can help reduce muscle breakdown and medical complications and may even improve children's mental well being and social interaction.

He was granted medical clearance in 2021. Marsi Bionics now has 25 employees. The pediatric exoskeleton can be found in hospitals and rehabilitation centers throughout Mexico and the European Union. Analysts estimate that the exoskeleton market will grow to EUR2.8 billion in 2026 and EUR430 million by 2021.

‹ ›
Keywords:
ElenaGarciaArmadaPremioInventorEuropeo2022PioneroExoesqueletoPediatrico
Your comment has been forwarded to the administrator for approval.×
Warning! Will constitute a criminal offense, illegal, threatening, offensive, insulting and swearing, derogatory, defamatory, vulgar, pornographic, indecent, personality rights, damaging or similar nature in the nature of all kinds of financial content, legal, criminal and administrative responsibility for the content of the sender member / members are belong.
Related News