Elections in Angola: hope for "change" runs through the streets of Luanda

Angola is called to elect its deputies on Wednesday, the candidate of the majority party will become head of state. 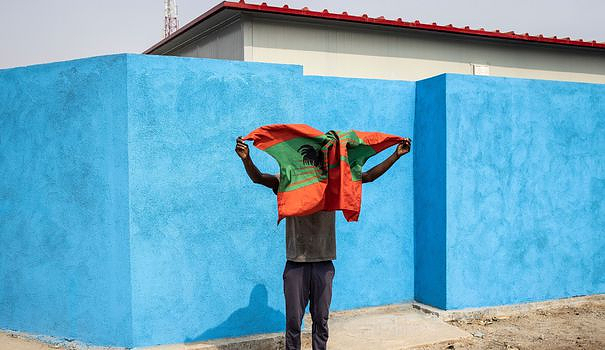 Angola is called to elect its deputies on Wednesday, the candidate of the majority party will become head of state. The former Portuguese colony has been ruled by the Popular Movement for the Liberation of Angola (MPLA) since its independence in 1975. But this time the poll promises to be tight with an opposition reinvigorated around its first party, Unita.

In the historic center of the capital, the oil windfall of the country rich in natural resources has caused skyscrapers to grow between colonial buildings. The gleaming 4x4s and the minibus taxis used by the working classes collide in endless traffic jams, under the eye of the police at every crossroads.

And while the majority of a population of 33 million Angolans scrape by waiting for better days, the elite toast on the trendy terraces of Luanda, the city reputed to be the most expensive on the African continent. The Angolan bourgeoisie seems more preoccupied with seaside selfies than politics.

In a square lined with palm trees, red-black flags and loudspeakers disrupt the quiet of the afternoon for a moment: it's a "maratona", a street party organized by the MPLA. There are no crowds.

"Our president has tackled corruption. You know, it takes rich people to govern a country. A poor leader is a leader who is easy to corrupt," party activist Simao Dos Santos told AFP. sporting an expensive smartwatch on his wrist. "The MPLA is the only party that can change our lives and our country."

Joao Lourenço, elected in 2017 and running for a second term, has launched a vigorous anti-corruption campaign to recover billions believed to have been misappropriated under the presidency of his predecessor, José Eduardo dos Santos.

He and his adversary, Adalberto Costa Junior, are fighting over the title of "people's candidate" on the posters, even if in Angola, "candidates are always from the elite", underlines the independent political analyst, Marisa Lourenço. Election time, the lower classes are courted.

But in Viana, a huge city of concrete blocks and sheet metal on the outskirts of the Angolan capital, exasperation dominates.

"I earn around 1,200 kwanzas a day (2.80 euros, editor's note), not enough to live on. Everything is expensive, prices are rising and we are earning crumbs", plague Gabriel, 37, just landed from a minibus at the edge of the expressway.

"We've been voting for years, without results. I can't even pay for school for my children," laments the street vendor.

Madalena Mondole, another resident, says she doesn't care about politics: "I want to vote for whoever gives me work. But who is going to give me work? Nobody."

Despite studies, her son is on the street, she says. "We are poor, we earn nothing".

In this popular district, the opposition has the favors of a youth undermined by unemployment. The median age in Angola is 16 years old. The street vendors have very specific opinions on politics and speak a chastened Portuguese.

"Long live the MPLA!" Suddenly launched a reckless young man. "Oh, go away! Don't listen to him, he's drunk, we all vote for Unita", reply the others.

But many working-class neighborhoods are still loyal to the MPLA in power. The historical party is increasingly unpopular, but it can still count on its aura of winning the fight for independence.