El Nazareno, poster of this year's Holy Week at Vera 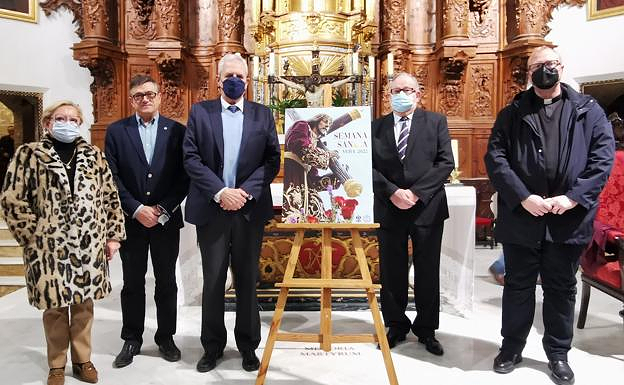 Wednesday afternoon saw the official poster for Holy Week 2022 presented in Nuestra Senora De la Encarnacion. It was scheduled to coincide with Ash Wednesday mass and featured representatives from the various brotherhoods in the area. A large audience.

The Royal Archconfraternity of Nuestro Padre Jesus Nazareno prepared the poster this year. A beautiful photograph of Antonio Ramirez captures the iconic image of the Nazarene who is its main owner. Miguel Flores designed and laid out the layout.

Jose Carmelo Jorge Blanco, the mayor; Alonso Martinez, the president of Association of Brotherhoods and Brotherhoods; Amparo Garcia, the Councilor for Celebrations; Cristobal Gallardo (member of the Governing Board of Royal Archconfraternity of nuestro Padre Jesus Nazareno); and Don Jesus, the parish priest, were responsible for discovering the poster that announced Veratense Holy Week.

Cristobal Gallardo stated that the poster for this year included an image of Nuestro Padre Jesus Nazareno as our headline. This is a photograph of one of the most important veneration processesions of Holy Week such as the Subida de Jesus or the Pregon del Jewish.

The mayor of Vera stated that after two years of not feeling the passion and emotion that our procession steps bring to Vera's streets, he can now announce that 2022 will be a very intense Holy Week in both the religious and social spheres. The mayor of Vera thanked the Association of Brotherhoods and Brotherhoods of Vera with its president Alonso Martinez Gerez as the head, and to all the Brotherhoods and Brotherhoods of the municipality that made it possible for Holy Week to be one of best in the province. And of course to Don Jesus, our beloved parish priest, who will lead the procession through Vera this year by our side>>. Jorge Blanco thanked them all for their "great effort and dedication to organizing Holy Week, highlighting Vera's cultural and heritage wealth, which is a very important tourist attraction in our municipality, as there are many people who visit Vera around these dates. The mayor of Vera also reiterated that the Vera city council would continue to support the Brotherhoods to ensure that Holy Week continues to shine and remains a major tourist attraction.

‹ ›
Keywords:
NazarenoCartelSemanaSantaVera
Your comment has been forwarded to the administrator for approval.×
Warning! Will constitute a criminal offense, illegal, threatening, offensive, insulting and swearing, derogatory, defamatory, vulgar, pornographic, indecent, personality rights, damaging or similar nature in the nature of all kinds of financial content, legal, criminal and administrative responsibility for the content of the sender member / members are belong.
Related News