El Maristan will be open September 1st with archaeological'secrets' as well as a second phase.

The first chance for the people of Granada to meet the Maristan, the first European restored Nasrid hospital, will be July 25-28 through guided tours, which coincide with the International Archeology Day. 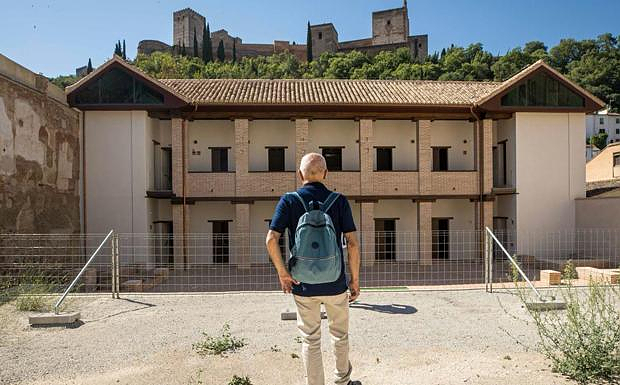 The first chance for the people of Granada to meet the Maristan, the first European restored Nasrid hospital, will be July 25-28 through guided tours, which coincide with the International Archeology Day. It will be open for educational visits and rest from September.

After 25 months of hard work, a ruin site covered in corrugated iron was transformed into this replica of the Nasrid Hospital. It is located in the Albaicin neighborhood next to Majuelo Street and is from where the Alhambra is split.

This south portico's construction contains many curiosities and archaeological'secrets'. These elements have been contributing to the global ensemble. The architect Pedro Salmeron explained this by explaining the details of the work.

Patricia del Pozo (acting Minister of Culture and Historical Heritage) has stated that the receipt of the first phase for consolidation and restoration to the Maristan's southern portico fulfills a historical claim by Granada and its people after many years of waiting and broken promises. Del Pozo, who was accompanied by Antonio Granados, the delegate for Culture and Historical Heritage, Granada, and the general director of the Board of Trustees of the Alhambra and Generalife Rocio Diaz, made a visit the old Nasrid Hospital. They assured that the first phase of consolidation and restoration of the southern portico of the Maristan has allowed it to "recover the lost splendour". This hospital is the first Nasrid in Europe.

"Behind, we have left that building as it was, in ruins and abandoned, whose remains on top covered nothing but a corrugated-iron. The Government of Juanma Moreno has made this a heritage gem that was, like many others, relegated to oblivion." stated the head of Culture and Historical Heritage.

Del Pozo also acknowledged the efforts of the Board of Trustees of Alhambra and Generalife in completing a project that had been neglected for many years and was vital to the city. This action can be seen during guided tours, which coincide with the International Archeology Day. The archaeologists from the project will guide them. Reservations can be made on the Board of Trustees' website. The acting Minister of Culture and Historical Heritage announced in this spirit that the Board of Trustees has already begun work on the second phase of Maristan. She stated that it is "one of our priorities and that's what we committed to when we arrived at Andalusian Government".

For her part, the director of the Board of Trustees of Alhambra and Generalife stressed the importance of preserving our heritage and collaborating in the socioeconomic development of a neighbourhood such as the Albaicin which was declared a World Heritage Site (UNESCO). The Alhambra is located next to it. Diaz also pointed out that the Maristan's recovery means that a crucial chapter of the city's history is closed. It is yet another example of how it is possible for projects to be carried out in Granada. Diaz said, "It's only a matter if you will."

The second phase is still to be completed. It will cover more than half the area where it was initially thought that it would rebuild the remaining porticoes. The project will determine all this. It is expected that it will be out for tender in the first quarter 2023. It is expected that the whole Maristan will be available within a few years.

‹ ›
Keywords:
MaristanAbriraSeptiembreSecretosArqueologicosSegundaFase
Your comment has been forwarded to the administrator for approval.×
Warning! Will constitute a criminal offense, illegal, threatening, offensive, insulting and swearing, derogatory, defamatory, vulgar, pornographic, indecent, personality rights, damaging or similar nature in the nature of all kinds of financial content, legal, criminal and administrative responsibility for the content of the sender member / members are belong.
Related News