El Ejido launches summer with activation of the Beach Plan

Yesterday saw the start of beach season in El Ejido, thanks to the implementation of the Beach Plan. 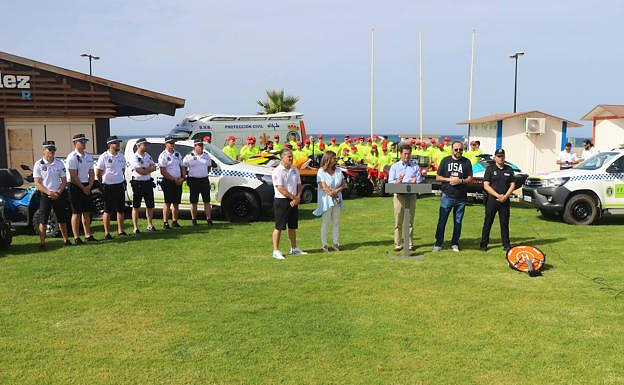 Yesterday saw the start of beach season in El Ejido, thanks to the implementation of the Beach Plan. The device will be active until September 11, Day of Municipality. This year, there will be an increase in human and material resources.

This summer, as a novelty, Wi-Fi access will be free at various points along the coast. It is planned that the Wi-Fi network will operate in six locations throughout the summer, three permanent and three temporary. The landlines will be at the SOS station in front of Brisamar and at the Poniente beach adapted point, near the rugby field and close to the Balerma tower. The temporary access points for them will be located at the adapted points of the Levante and San Miguel beaches.

Francisco Gongora (the mayor of El Ejido) stated that he will have 42 lifeguards, a medical emergency technician, a nurse and 16 surveillance posts this summer to help with the control, surveillance, and security system. Three more will be available than last year. They will all be assigned to the coast, and regular patrols are made daily to increase police surveillance.

Similar to the ambulance, three rescue boats, four lifeguards, and two more from the Local Police will be present on the beach vehicles.

This year, El Ejido's City Council has added new rescue and health material to increase or renew the resources. The mayor also recalled that last year, all beaches were equipped with a semi-automatic heart rate monitor with the goal of decreasing the time it takes to respond in case of an emergency.

In terms of disinfection and cleaning, there will be 30 operators who will cover the entire week in high season. Two drivers will also be added. Three 4x4 tractor trucks will also be used, two of which are newer than last year. A screening machine to collect all types waste and algae in the sand, as well as a raking and scraper grader, leveling blades, and a trailer of 8,000 kilos.

The 'Playas El Ejido" mobile app is available again to provide real-time information on the current state of the sea, its capacity and the services offered by each beach.

The highest municipal official highlighted another innovation in the 2022 Beach Plan. He said that 135 meters of wooden walkways were purchased to cover San Miguel Beach. They are 180cm wide and based on accessibility regulations. This will make it easier for people with reduced mobility to bathe.

Seasonal Services: El Ejido has eight beach bars, six hammocks, umbrellas, and three kiosks between Balerma, Poniente. There is also a nautical area in Levante de Almerimar, and a massage area in Poniente.

‹ ›
Keywords:
VeranoEjidoPlanPlayasPistoletazoSalidaActivacion
Your comment has been forwarded to the administrator for approval.×
Warning! Will constitute a criminal offense, illegal, threatening, offensive, insulting and swearing, derogatory, defamatory, vulgar, pornographic, indecent, personality rights, damaging or similar nature in the nature of all kinds of financial content, legal, criminal and administrative responsibility for the content of the sender member / members are belong.
Related News