At the opening of the UN climate summit organized in Sharm el-Sheikh (east), the pro-democracy blogger who will celebrate his 41st birthday on Friday had hardened his showdown with the prison administration. 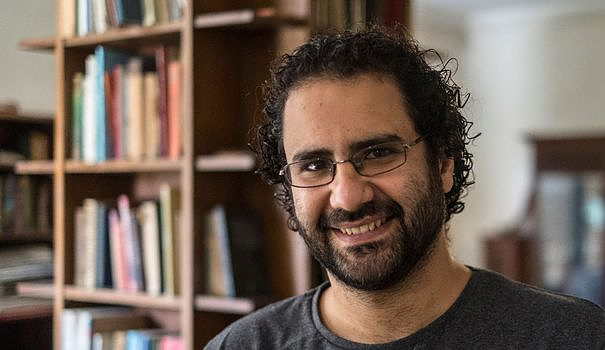 At the opening of the UN climate summit organized in Sharm el-Sheikh (east), the pro-democracy blogger who will celebrate his 41st birthday on Friday had hardened his showdown with the prison administration.

After seven months of ingesting only 100 calories a day, he stopped eating and then drinking on November 6. He finally started to eat again but "he is exhausted, very, very thin and sometimes has to lean against the wall" to stand, told AFP Ahdaf Soueif, his aunt, who was able to see him twenty minutes Thursday with his mother Laila Soueif and his sister Sanaa Seif.

"Alaa was close to death in prison, but he decided to come back to life," his family said in a statement.

The campaign led by his relatives and human rights defenders at COP27 forced Egyptian President Abdel Fattah al-Sissi to discuss with several Western leaders the case of the pro-democracy blogger who has been imprisoned for more than three years.

The main interested party, he "had no idea" of the mobilization in his favor, said Ahdaf Soueif. "We told him" in the visiting room through a window and through a handset, she added.

From now on, "we hope that the incredible global attention on his case and the tens of thousands of people who support him will help to get him released", she continued.

If he does not win his case, "he will have no choice but to quickly resume his hunger strike", she warned.

Because "attention will drop with the end of COP27" probably during the weekend, worried her sister Sanaa Seif, at the forefront of the campaign at the UN summit where she has continued to alert to the fate of the 60,000 prisoners of conscience in Egypt.

The family now hopes to obtain a decision from the Presidential Pardon Commission, reactivated in April in Egypt.

One of the country's most influential talk show presenters, a big supporter of Mr. Sisi, has already pleaded for a pardon "in the interest of Egypt". And a member of the pardons commission said "hope for quick action from the state".

If this commission has released more than 750 prisoners of conscience since April, human rights NGOs complain that the authorities have arrested, at the same time, twice as many people for crimes of conscience.

So far, the last moments of Alaa Abdel Fattah's hunger strike have been unclear: his supporters accused the prison administration of "force-feeding" him, while the prison claimed he was "in good health " and under "medical treatment".

His aunt explained to AFP on Thursday that "on November 11, Alaa had collapsed, unconscious".

“When he woke up, a fellow prisoner was holding his head and he was getting glucose intravenously,” she continued. Alaa Abdel Fattah "speaks of it as a near-death experience".

The man who became Egypt's most famous political prisoner was sentenced at the end of 2021 to five years in prison for "false information" for having shared on Facebook a text, written by someone else, accusing a police officer of torturing a prisoner to death.

Two men were convicted in the same case with him. Blogger Mohammed Ibrahim, aka Oxygen, and his then-lawyer, Mohammed al-Baqer, arrested while coming to defend him in military court in September 2019.

His lawyer, Khaled Ali, whom he has not seen since March 2020, has twice in recent days been refused entry to Wadi al-Natrun prison, 100 kilometers northwest of Cairo, even though he had the necessary visit authorizations.