Ecuador: in Guayaquil, paralyzed and in open war against drug traffickers

In the heart of this port of 2. 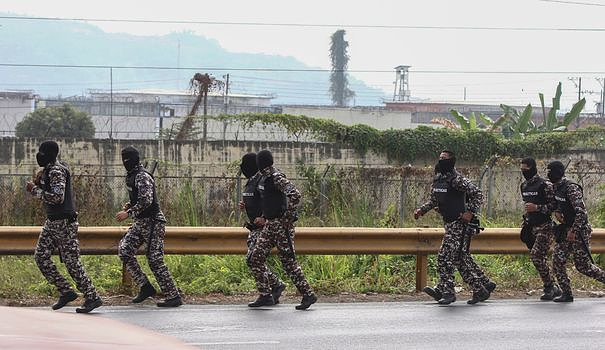 In the heart of this port of 2.8 million inhabitants, the economic lung of Ecuador, the gangs have been showing their firepower since Tuesday: shootings, explosive attacks, car bomb attacks against police stations, stations ward or hospital are launched in retaliation for a transfer of prisoners.

Near the main penitentiary establishment in Guayaquil (southwest), called Guayas 1, gunshots and explosions can still be heard from time to time.

The prison administration attributes the shootings and grenade attacks to inmates "members of organized criminal groups", this prison being controlled by gangs of drug traffickers.

In the deserted city, the police patrol with all the lights off.

Checkpoints set up across the city are an easy target for gangs, which can appear at any time and trigger deadly gunfights.

As soon as a car appears, the alert is given. "It has become a job where you are in danger of death at all times," said a 21-year-old employee on condition of anonymity.

He fears being killed "ruthlessly" by armed men. "We must also prevent someone from passing and leaving a bag or a suitcase in the station without us noticing," he said, adding that he had seen "bombs explode".

In the event of an attack, its mission is clear: cut off the gas station's electricity in order to avoid an explosion.

President Guillermo Lasso described this situation as "open war" and did not hesitate to extend the state of emergency in force since Tuesday to a third province, to mobilize the army and to deploy it in the prison of Guayas 1, fell into the hands of a handful of gangs: the "Lobos", "Choneros", "Tiguerones" or "Chone Killer".

"This government will not yield to narco-terrorists: they will not be able to impose their will in the country", declared the head of state.

The state of emergency has been in effect in the provinces of Guayas and Esmeraldas since Tuesday and now also in Santo Domingo de los Tsáchilas (west), totaling six million inhabitants, or a third of the total population of Ecuador, whose constitutional guarantees are restricted for 45 days.

Images of hundreds of detainees lying on the ground, shirtless and hands tied behind their backs, have made the rounds on social networks.

The violence has left eight people dead and 23 injured since Tuesday, mostly police and soldiers.

Drug traffickers, some of whom are linked to Mexican cartels, are waging war on the streets and in prisons in Ecuador, where massacres have claimed nearly 400 lives since February 2021.

Located between Colombia and Peru, the world's largest producers of cocaine, this state has gone from being a drug transit country to that of a major distribution center to Europe and the United States.

In 2021, authorities seized a record 210 tons of drugs, mostly cocaine. Since the beginning of the year, seizures have totaled 160 tons.