Ecological transition: the highlights of the debate with Stanislas Guerini

How does the State set an example when it comes to carrying out its ecological transition? What strategy should be adopted to coordinate it according to the different administrative strata? Stanislas Guerini, the Minister of Transformation and the Public Service was the guest of L'Express, this Thursday, November 24, to discuss the acceleration of greening policies and their implementation in the territories. 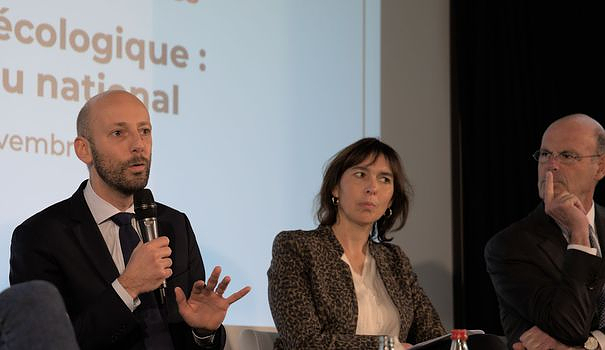 How does the State set an example when it comes to carrying out its ecological transition? What strategy should be adopted to coordinate it according to the different administrative strata? Stanislas Guerini, the Minister of Transformation and the Public Service was the guest of L'Express, this Thursday, November 24, to discuss the acceleration of greening policies and their implementation in the territories. The country's situation, "currently at the crossroads of several crises - energy, biodiversity, resources - which are not all understood in the same way", is, according to him, an opportunity "to rethink the positioning of the action public".

For an hour, he debated with Eric Lombard, the general manager of Caisse des Dépôts, and Frédérique Macarez, mayor of Saint-Quentin and vice-president of the Association of Cities of France, in the presence of Eric Chol, editorial director of L'Express and Pascal Pogam, deputy editorial director. Once the urgency was over - "we have to do in eight years what we did in thirty years" to meet the objectives set, reminded Stanislas Guerini - our three guests discussed the articulation of the measures to be establish. In particular the need to "plan and deconcentrate the action, in the communities that must be supported, in the subsidiaries for the companies, pointed out Eric Lombard. We must change our economy, our social life, transform the organization and the development of cities. And elected officials have the means to coordinate this with the State."

"Communities invest a lot. The key is also there, in this impetus that can be given to the territory", agreed Frédérique Macarez. She insisted on "a balance to think about": the local level is both "the guarantor of a certain acceptability", all the more so in times of crisis and inflation, but must also "play the game of innovation and risk-taking in sectors that are not yet all mature". To provide a rapid and appropriate response to the fight against climate change, "territorial differentiation is the right recipe", estimated Stanislas Guerini.

In addition to the subject of financing, which is crucial, the three guests admitted that that of training was just as crucial. "The question of competence with dedicated recruitment is not an easy task", recognized Frédérique Macarez, who gives the example of her difficulty in filling a position. "We have weakened a lot in recent years in the control of the works", recognized the Minister of Transformation and the Public Service. He recalled the training plan for public officials in the challenges of ecological transition, launched in November, where "a theoretical component and an action component, on the ground" coexist.

Stanislas Guerini hopes that these trainings will bring "inventiveness, creativity" among state executives. And encourages "thinking of public power as a facilitator of the major transformations" to come.