Earthquake in China: at least 65 dead, army and firefighters mobilized 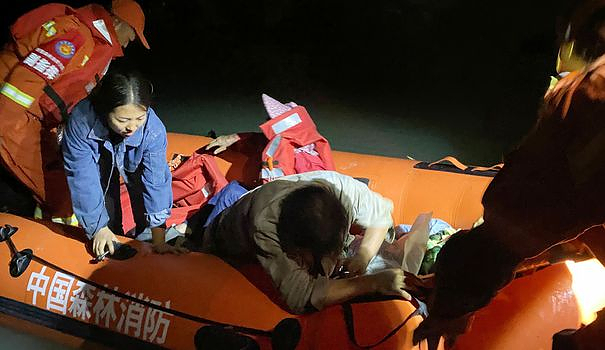 A 6.6 magnitude earthquake hit Sichuan province on Monday, according to the United States Institute of Geological Survey (USGS) - the world's leading organization for earthquakes.

The epicenter is in Luding Township, an area of ​​valleys, rushing rivers and narrow roads, located on the edge of the Tibetan Plateau, about 200 kilometers west of the provincial capital Chengdu.

Public broadcaster CCTV aired videos on Tuesday of firefighters in orange gear and police pulling a bruised young woman from the rubble of a building, before transporting her on a stretcher to an ambulance.

Other images showed wooden and concrete buildings, gutted or even partially collapsed or in unstable equilibrium.

Some roads, fallen into debris or fractured by the earthquake, have become impassable, forcing rescuers to cross some rivers using makeshift bridges or cables stretched from one bank to the other.

Thirty-seven people died in the Tibetan Autonomous Prefecture of Garze, where the epicenter is located, and 28 in the neighboring township of Shimian, according to CCTV and the People's Daily, a newspaper of the ruling Communist Party.

This brings the new provisional toll of the earthquake to 65 dead.

Nearly 250 injured and 12 missing are also listed, according to various counts published by state media.

In addition, about 200 people are stuck, after the blocking of a road, in the Hailuo Valley, a natural area of ​​glaciers and snow-capped peaks very touristy - located at more than 2,850 meters above sea level, said CCTV.

The Chinese army, accustomed to earthquakes, announced on Tuesday that it had already deployed 1,900 soldiers to participate in the search for the missing and rescue the population.

At least 10 aftershocks of magnitude equal to or greater than 3 have been recorded since the first earthquake, according to a latest tally made Tuesday morning by the Chinese Center for Seismic Networks (CENC).

Chinese President Xi Jinping called Monday evening "to do everything to come to the aid of those affected" and "minimize the loss of life", reported the official news agency China news.

However, local weather services predict rain in the next few days in the epicenter area, which could complicate rescue operations.

The tremor on Monday also shook buildings in the provincial capital Chengdu, where the 21 million inhabitants are currently confined to their homes due to an outbreak of Covid-19.

Sichuan, regularly hit by earthquakes, is known worldwide for its reserves of giant pandas and for its spicy cuisine, one of the most famous in China.

In June, a 6.1 magnitude earthquake had already shaken the province, killing at least four people and injuring dozens.

Among the victims were thousands of students, killed in the collapse of precariously constructed schools. Police at the time arrested activists who were trying to count the precise number of children who died in the disaster.