During the Festival, Ubeda will be telling ...' stories in squares and patios.

The Storytelling Festival "In Ubeda it's told will return to Ubeda to visit different patios and squares in the World Heritage city. 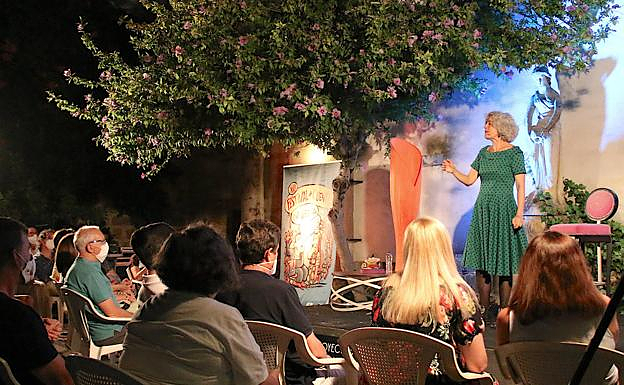 The Storytelling Festival "In Ubeda it's told will return to Ubeda to visit different patios and squares in the World Heritage city. This will bring together diverse audiences around stories that the narrators will share, from different parts of the geography national. It will take place on the night of San Juan and run for approximately two hours. The extensive program of activities has been carefully planned by the Malion Association, the organizer of the event, which already celebrated 23 editions.

Javier Gordillo was the president of the station and was responsible for separating out different proposals. For example, he announced the following: "The minimum story of every day" will be broadcast on Radio Ubeda (Cadena Ser) from June 20-25, 10:00 p.m.

The official and face-toface inauguration will be held outside the airwaves on Tuesday, June 21 in San Lorenzo. This space was saved for culture by Huerta de San Antonio Foundation. The prestigious Claroscuro troupe, which often uses puppets and actors, will present the show "Where the stories go" from there at nine o'clock in the evening. It is recommended that you attend the function from 10 years old. A contribution of 6 Euros will be required for entrance.

On Wednesday, the 22nd of March, you will be able to enjoy the evening Tales from the Battlements'. The narrator Ubet Nono Granero will lead the session at quarter past nine and ten at the night in the Torreon del Portillo del Santo Cristo, Cava street. Invitations are required for admission. On Thursday, June 23rd, the La Beltraneja bar and San Lorenzo churches will host simultaneous sessions for adults under the title "Tales on the threshold", with participation by Paula Carballeira, and Carles Garcia.

Friday 24th will see the storytellers begin to tell stories at half past eleven in Occupational Center's 'Stories For Everyone' session, which is funded by Obra Social La Caixa. The day will end at half past seven on Radio Ubeda, with 'Cuentos con Buena Onda,' featuring the voices of Pep Bruno and Eugenia Manzanera as well as Legolas Colectivo Escenico's Noelia Camacho, Jhon Ardila, and Legolas Colectivo Escenico. The day will close with Stories in the Palace, which will begin at nine o'clock at night in the Palacio anguis Medinilla courtyard. Here, all the narrators will tell stories that are aimed at families. This event will be used for the delivery of 'La Tragantita,' the festival's mascot. It is presented to an individual or entity who has been named an honorary member. It will be the City Council of Ubeda in this instance.

Two proposals will be presented to complete the festival's final touches on Saturday, June 25. The session entitled "In the mouth the wolf" will be held at 12 noon in Plaza de Santo Domingo. The traditional "Tales from square-to-square" will be held at nine o'clock in the evening. This will include a tour through the historic center that takes place where all of the narrators will participate. The route will begin at the Plaza Juan de Valencia and continue to the Plaza de los Carvajales, Puerta de Granada and finally end in the Casa de las Torres. This is all for families, except the last stop which is open only to adults.

Elena Rodriguez, Councilor for Culture, stated that the festival was unique in the province, and that it is one of the most important festivals in the autonomous community. This is due to its 23-year history and the high quality programming it presents. She said that the Malion Association worked hard on the proposal for this year, so that everyone can enjoy it as any other storytelling festival. Obra Social la Caixa's support was also appreciated by her. They are involved in various social and cultural activities throughout the year that have a positive impact on the town. We consider the festival a great cultural and social initiative. Felix Carbajo (director of La Caixa in Ubeda) said that he hoped that they would continue to support one another and that they would increase their collaborations.

The collaboration with UNED, which is also heavily involved in Ubeda's cultural and educational life, has been another of the collaboratives that has given this festival more projection and a didactical character. The Oral Narration Cycle was hosted by Malion at its Ubetense headquarters in recent days. This was the fourth year of the collaboration. This initiative envisioned three conferences. Celso Fernandez Sánmartin, who drinks directly out of orality and all the stories around him, was the last to take place. He starred in the talk titled 'Count'.

‹ ›
Keywords:
CuentosResonaranPatiosPlazasFestivalUbedaCuenta
Your comment has been forwarded to the administrator for approval.×
Warning! Will constitute a criminal offense, illegal, threatening, offensive, insulting and swearing, derogatory, defamatory, vulgar, pornographic, indecent, personality rights, damaging or similar nature in the nature of all kinds of financial content, legal, criminal and administrative responsibility for the content of the sender member / members are belong.
Related News