Post a Comment Print Share on Facebook
Famagusta 29
DOLLAR 17,90
EURO 18,30
GOLD 1.033,23
BIST 2.785,16
Opinion: 'Saudi Arabia, from oil to tourism'
Jordi Bordoy, rider and general manager of Motos Bordoy, new president...
Opinion: Financial education brings us closer to well-being
Bizum notifications don't reach users because of this reason
To steal your data, send false SMSs to BBVA or Unicaja customers
Notification from the OCU to mortgagees who will be paying insurance
In a packed Pamplona, the bulls run fast and smoothly.
What day does Santander, BBVA, CaixaBank and Sabadell pay July pensions?
You can get a 10% refund on direct debit subscriptions with the new BBVA...
From the port to the inner city

Due to construction, the bike lane at La Zubia Road will be closed until November 17,

Due to remodeling work that the Granada Provincial Council is undertaking on the road connecting La Zubia and Granada, the bike lane will be closed until November 17. 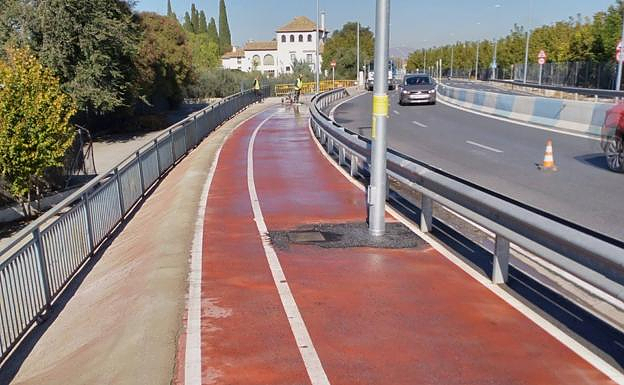 Due to remodeling work that the Granada Provincial Council is undertaking on the road connecting La Zubia and Granada, the bike lane will be closed until November 17. This is in compliance with a court order against the former government of this institution, the PP. Technicians are signaling and painting the bike lane. In the presence of heavy machinery, it may also be closed occasionally.

After this action is complete, the existing bike lane will be transformed into a pedestrian lane starting November 17th.

Puri Lopez, the mayor of La Zubia recalls that since last summer the Provincial Council has been working on the road with an investment of over 600,000 euro to try and fix "a real nonsense" of work. This was done when the PP was governing in the Diputacion de Granada>>.

"This municipal government team, just like the Granada Provincial Council does not like the bike lane. But it is the inheritance the PP left to us when it designed the road and built it. They did not make the expropriations necessary so that this road could be made wider, which makes it less comfortable for bike lane users.

Lopez recalled that the Diputacion de Granada's current government is only doing fine engineering work to repair the "absolutely botched job" that the Popular Party did when it designed the bike lane. There were several technical reports against Lopez.

This is in addition to a court ruling which highlights the faulty design and poor execution of work that was done on the road for electoral purposes. Two accidents were caused by poor lighting that claimed the lives of two people.

The councilor reminds us that the remaining sections of the bike lane to La Zubia are being built by the Junta de Andalucia as well as the City Council. They will be wider than the original PP design and will meet all users' needs, unlike the one constructed by the Diputacion.

‹ ›
Keywords:
CarrilBiciCarreteraZubiaPermaneceraCerradoNoviembreObras
Your comment has been forwarded to the administrator for approval.×
Warning! Will constitute a criminal offense, illegal, threatening, offensive, insulting and swearing, derogatory, defamatory, vulgar, pornographic, indecent, personality rights, damaging or similar nature in the nature of all kinds of financial content, legal, criminal and administrative responsibility for the content of the sender member / members are belong.
Related News