Drought: the castaways of the Burgundy Canal

Since July 16, no boat, except derogation, borrows the 40 km of the Canal de Bourgogne between Tonnerre and Migennes, in the deep Yonne. 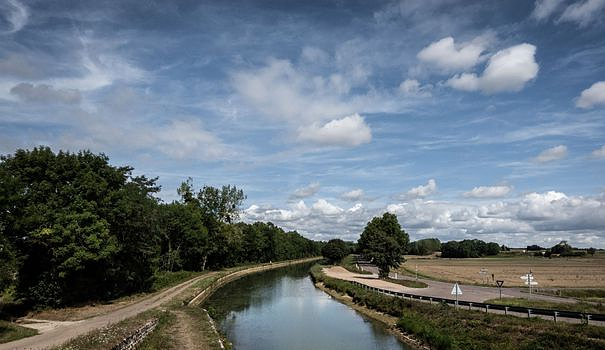 Since July 16, no boat, except derogation, borrows the 40 km of the Canal de Bourgogne between Tonnerre and Migennes, in the deep Yonne. Between heat wave and drought, the level of the rivers is too low to feed the canals, 14% of the 6,700 km of river network are unusable, according to official figures.

"The days are long": Vincent Le Goff, head of the port of Saint-Florentin (Yonne), regrets the "4-5 boats" he welcomed every day in his harbor master's office, which is now empty.

In the small port of Saint-Florentin, the ducks are no longer disturbed and the empty spaces follow one another. The rental company Nicols has moved its boats over the approximately 200 km still open of the Burgundy Canal linking the Seine basin to that of the Rhône.

Rare are the boaters who have joined their boat moored all year round, because no one can sail.

"It's relaxation, sleeping in and video games for the children", says Jean-Philippe Tesson, blocked since the beginning of August on the Cézanne. "We're fine, but it shouldn't be every year!".

This is precisely the problem. In 2019 and 2020, the drought had already prohibited navigation. “Over the past four years, only 2021 has been a full season,” regrets Vincent Le Goff.

"Is it going to be like this every year?" Asks Nathalie Piller. La Parisienne launched the "Interlock" in the water in 2019 and has hardly taken it out since.

"This summer, we wanted to take advantage of it but we couldn't move," she regrets. "So we're on the waiting list for another port."

More and more yachtsmen are changing their mooring place. “We had 80 boats wintering in 2018, around fifty now,” says Mr. Le Goff.

However, the port was booming. "We invested 1.5 million euros. We had reached equilibrium but now we are in deficit", regrets Yves Delot, president of the Community of communes Serein and Armance which includes Saint-Florentin and operates the port.

A few km away, the situation is even more delicate for the private port of Brienon-sur-Armançon. "It's a disaster. We wonder if we will continue," confesses Manuel De Oliveira, the manager.

The municipalities of this desertified region, very dependent on tourism, are also making a distressing calculation. "A boat is 5-6 people: our traders are suffering", underlines Mr. Delot, also mayor of Saint-Florentin (4,600 inhabitants).

"Ah yes, we lost customers. Well 25%", confirms Normann Lin, boss of the "Guinguette de l'Armance", opened with public money. The mayor, he hopes that the investments will not go to waste with the closures of the canal.

The drought has a good back, according to the mayor, who rather accuses the Waterways of France (VNF), a public body managing the canal, of "very badly maintaining it".

"It's a sieve," said Vincent Le Goff, blaming in particular the leaky locks.

“We had droughts but the canal had never closed” before, underlines Didier Raphat, manager of the Saint-Florentin river site.

"Water, there is higher but here, nothing more. Where does it go? Asks Michel Piat, owner of the Vigilant. This man born 84 years ago on a barge is "heartbroken" to see what has become of "Burgundy", the emotional name of the canal opened in 1832, "a part of heritage".

Faced with criticism, Virginie Pucelle, deputy director at VNF ​​Center Bourgogne, talks about the vast plan to modernize the locks on the 6,700 km of tracks managed by VNF in France.

According to her, it is not the leaks but rather the dryness that causes the problem. The canal can no longer be fed by drawing from the Armançon, the nearby river, which is currently too low. "Before we had the right to draw from the river as we wanted" but "today, we must preserve the environment".